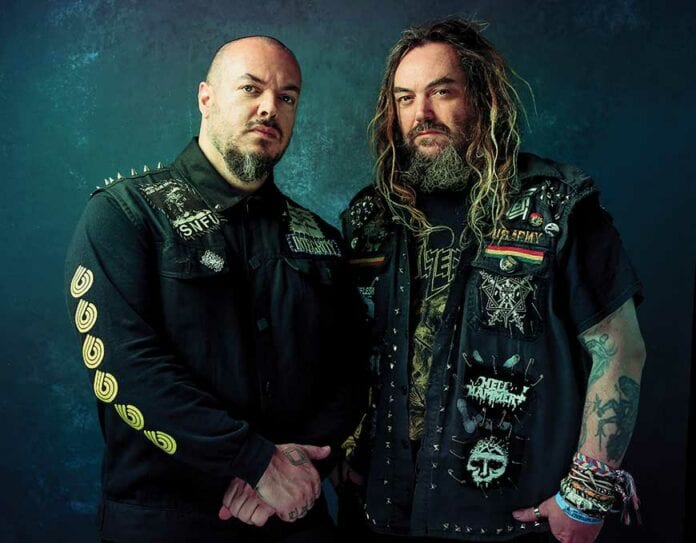 Cavalera Conspiracy is back with its fourth album, Psychosis, and the band is in rare form. Led by brothers Max (vocals, guitar) and Igor (drums), every release has had a distinct feel of its own while never betraying the band’s core sound, and their latest salvo is a furious collection that has one foot firmly placed in the thrash and death metal of the early 90s and the other in the most aggressive hardcore sounds of today. Max Cavalera gives us the inside story.

As the principle writer for both Cavalera Conspiracy and Soulfly, do you begin writing with a specific band in mind, or do you allocate the songs as you come up with them?
Most of it I write for the albums themselves, and with this one I had a clear picture in my mind of what I wanted Psychosis to be—it was a very specific death thrash mix. The riffs were supposed to be influenced by a lot of the stuff from that era, mixed with what I listen to now, like Nails, Full of Hell, that kind of stuff.

When you previewed the opening track “Insane,” a lot of the responses commented that it really evoked Sepultura’s Arise (1991). Was that intentional?
It kind of happened, but at the same time it was something we went for. I wanted to explore that era and make a record that pays homage to it. I think we can trace that period we were going for all the way back to Schizophrenia (1987), and from that through Beneath the Remains (1989), Arise, and also Nailbomb’s Point Black (1994), combining that with the bands I mentioned before and others around right now that we really like—Code Orange and Power Trip—plus other things I listen to like Satyricon, Necrot, Dying Fetus, and Suffocation. There’s a little bit of a lot of things, and I actually think the thing on the album that most evokes that early era is in the vocals. They’re really old school vocal patterns and nothing like what I did on the last record. I was talking to our producer Arthur Rizk, and he said he liked our early records because we had a really cool, crazy vocal style that almost didn’t fit in. It went against the riffs and drums, and I told him I had no idea what I was doing at the time. And he said, “That was great, the best music is done like that.” So, we decided to do that, have vocals that really take off on their own, and especially on the songs “Judas Pariah” and “Insane.” The patterns on those really are crazy and don’t fit the songs, but they work.

Was “Insane” always your first choice to open the record?
Yeah, though it had a different beginning on the original demo. It had a more frantic guitar riff, but for some reason when we got into the studio we couldn’t reproduce the demo. We tried, but it was one of those things where the studio version didn’t come out as well. So, we switched it to the first riff you hear now, though we actually did try to do an intro for the record, but everything sounded cheesy and done before. So, I told Arthur, “Fuck all this intro shit. Let’s start the record with guitar and as brutal as it gets.” It’s a much more upfront approach, and I think it works better, having this song in your face as soon as the album starts. There’s no bullshit, what you see is what you get straightaway.

“Hellfire” really evokes “Sum of Your Achievements” from Point Blank. You did a tour playing that record in its entirety recently. Did revisiting that inspire it?
Yeah, and getting to work with Justin Broadrick [Godflesh, Jesu] on it, too. I recorded the guitar part and said to Arthur, “Can you mess with it so it sounds more electronic, almost synthesized?” He did that, and Igor actually played real drums on it, but they were processed through a lot of delays and overdubs so they now don’t sound live, making the song sound industrial as hell and very noisy. There’s all kinds of feedback and shit going on, and I especially like Justin’s vocals. I’m a big Godflesh fan, and for me it was so fun to hear what he did. And one thing that makes it so cool is that what he does is so effective and so powerful, but he’s only actually saying one word (laughs). I don’t think anyone would expect him to be on one of our records, so it was cool to surprise a few people.

“WE’RE IN A PSYCHOTIC SOCIETY RIGHT NOW, AND PSYCHOSIS REALLY DOES ENCAPSULATE WHAT YOU FIND ON THE RECORD.”

The title track is actually an instrumental. Was it always that way, or did it ever have lyrics?
It was always an instrumental, and it didn’t have a name for a long time. We actually thought that titling a record after an instrumental is kind of weird, and kind of original, so we thought that’s cool, let’s go with that. I think it works. The song is quite different, and heavily influenced by prog rock, Neurosis, and YOB’s kind of stuff with really tribal drums and a lot of keyboards and melodic guitars, with both riffs really melodic. We had some ideas to record screaming in the desert that we were going to put on it, but it was so hot in Phoenix, we changed our minds (laughs).

Where does the title Psychosis come from?
We didn’t have one for a long time, and then we were going to call it Massacre, but that was really generic and there’s lots of other records called that. I was going through the internet looking at different cool names and ideas, and Psychosis popped up and I was immediately intrigued by it. It’s got a Schizophrenia kind of vibe to it with that whole mental illness thing, but I look at it as society being the main source of this psychosis right now, especially with Donald Trump as President. We’re in a psychotic society right now, and Psychosis really does encapsulate what you find on the record.

Is it safe to assume that the song “Crom” is inspired by the Conan stories of Robert E. Howard and the movies that followed?
Yeah! I love turning movies into songs and have been doing that my whole life. This time around I went right to the source. Crom is who Conan prays to when he’s fighting, and Arthur and I watched the movie before tracking the vocals, so we could be really inspired by it, especially when his mom gets decapitated, which is so powerful. We ended up having Arthur’s friend who sings for Iron Age doing the spoken word towards the end of the track, which is taken from a poem about Crom. It was a really fun track to make.

What’s “Judas Pariah” about?
It’s pretty much about betrayal. I’m not going to go into detail as to who is the betrayer, most people will figure that out when they read the lyrics. It’s about dealing with it, and it kind of never goes away, that kind of feeling. Musically, the song is pretty much black metal. It could have been on Morbid Visions (1986) with a straight-up riff that comes from that sound, and then towards the end there’s a very Celtic Frost riff, which I think is very cool, too. I’m very fond of it because it sounds out of control, it comes from out of nowhere, and explodes in the middle of the record.

Why did you choose to work with producer Arthur Rizk on Psychosis?
Because he’s great. He’s very knowledgeable about metal in general, but he knew the whole Max and Igor catalog front to back. He was really good when it came to input. He’s also a very good engineer, though it was quite chaotic sometimes. There were some points where I had no idea what he was doing. I even asked him, “Are you sure you’re going to be able to organize things? Because right now that sounds like a big mess!” I had no idea what was going on, guitars everywhere and nothing was fitting, but he was good to his word and in the end he made it work. He’s a good guy, young and full of energy, and he worked really hard.

What was the hardest part of tracking?
There was nothing that was particularly difficult. I think the only real challenge was trying to keep the energy up across the record. Sometimes, making records like this, you end up losing some of the energy after a couple of songs, and I really didn’t want that to happen. I wanted it to be right up there throughout most of the record, and I think one really cool thing about the finished record is that it doesn’t really have an obvious single on it. It’s very different from albums like Roots (1996), which had big songs like “Roots, Bloody Roots,” or Soulfly (1998) where “Eye for an Eye” was a big song. We don’t have one like that this time. Everything comes together like a soccer team where everyone has to work together as a unit. It was a bit refreshing for me, and maybe on the next Soulfly, I will want to have that one song that stands out, maybe I won’t.