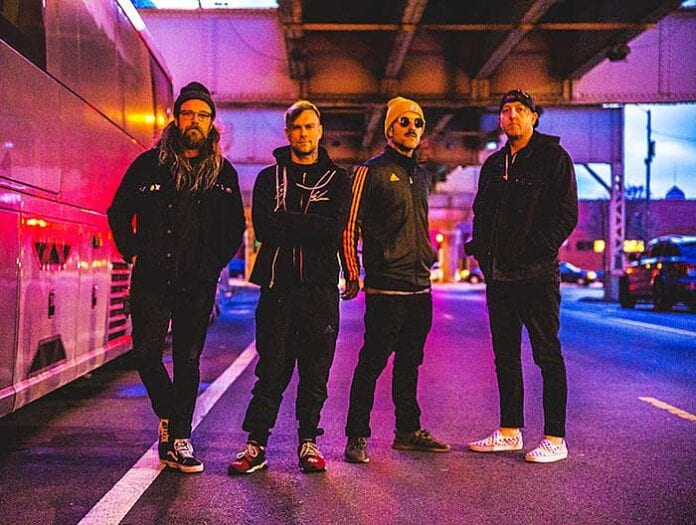 The Used is one of the most iconic, prevailing bands of this generation. Before the outbreak of Coronavirus stopped the world in its tracks, 2020 was on course to be an explosive year for music and certainly for one of the giants of alternative rock. Though uncertainty now plagues every corner of the planet, the music industry included, The Used are still ready for this year to be their best.

While the Covid-19 pandemic has everyone social distancing at home, The Used’s bassist Jeph Howard has taken it as an opportunity to get used to being home again in the lead up to their eighth studio album release, Heartwork. After an absence from home due to their intimate US tour that wrapped up in late February, he’s taking the time to decompress with his wife, spend time with his dog, and catch up on the inundating wave of video games, movies, and TV shows that fall to the wayside while touring.

“We need distractions. It’s sometimes bad but not at a time like this,” Howard says, looking on the positive end of the situation

“IT’S DEFINITELY INTERESTING TIMES FOR ALL OF US. IT MAKES US STRONGER. ALL OF US ARE FIGHTING THE SAME THING TOGETHER.”

The outbreak of Covid-19 has the world at a standstill and, unfortunately, the music industry has been widely affected. While their latest album, Heartwork, is still on for its April 24th release date, events like the album release party and their upcoming tour, the details of which have not yet been released, have been postponed. Still, Howard feels fortunate when so many of his friends and colleagues have been hugely impacted by the pandemic.

“It sucks, but it is what it is. I’m not complaining about some time off,” Howard says, having just come off of touring less than a month earlier when the quarantine was announced in the US. “A lot worse has happened. When it got real, half of our crew was in Europe. They were afraid to even get home, the flights were being canceled. It’s definitely interesting times for all of us. It makes us stronger. All of us are fighting the same thing together.”

With more than 90 percent of Americans under stay-at-home orders, now is the time that most people are looking to catch up on shows or start that book they’ve been meaning to read. Any diehard The Used fan knows literature and poetry color every facet of the band’s deep body of work. From the latest single off of Heartwork, “Paradise Lost, a poem by John Milton,” to The Odyssey references on The Canyon, to McCracken’s live soliloquy recitations, The Used is certainly a well read band. For fans to get the most out of their music, Howard, a huge Stephen King fan, suggests delving into the prolific horror author’s work.

“There are even some Stephen King references [on the album cover] that are really subtle. Me and Bert, we both love The Dark Tower series and that’s an amazing place to start.”

There are even some Easter eggs on the cover of the upcoming album. “Just as a hint, there’s a 19 at the top of the tarot card,” Howard points out. “That’s a Stephen King reference.”

“THERE ARE EVEN SOME STEPHEN KING REFERENCES THAT ARE REALLY SUBTLE.”

Though laden with overt Paradise Lost references, Howard doesn’t want to give away all the fun. “There’s the two missiles in the background which are from…actually, I don’t even want to tell you what that one’s from. You’ll have to look that up.”

The missiles might be symbolic of Gravity’s Rainbow by Thomas Pynchon. This lengthy novel deals with a fictionalized post-World War II Europe and centers on the manufacturing and dispatch of V-2 rockets by the German military. Some other titles The Used fans might want to add to their quarantine lockdown reading list are 1984 by George Orwell, indicated by the all-seeing eye. The stone might be a reference to “The Lottery,” a short story by Shirley Jackson in which a sinister custom, the lottery, is observed by selecting a member of a small town community and stoning them to death to ensure the community’s wellbeing.

And, of course, gracing the cover of their newest album is a callback to one of their most celebrated albums, 2004’s In Love and Death. The blood heart, one of their most enduring motifs, hangs between two skeletal lovers, suspended by a serpent in the tree of the knowledge of good and evil.

The callbacks are purposeful. Heartwork is being hailed as a nod to The Used’s past while stepping forward into the future. In Love and Death and their debut self-titled album are overt influences on Heartwork.

“IT’S A THROWBACK RECORD A LITTLE BIT. IT’S ALSO THE FUTURE, A BRANCH OFF OF THE PAST.”

“This record has a lot of throwbacks to older The Used stuff,” Howard says. “Like the title, Heartwork, sounds like [2009’s] Artwork. It’s a throwback record a little bit. It’s also the future, a branch off of the past.”

And while the album imagery is obvious, fans might enjoy some of the subtleties worked into connecting the future to the past. Howard says the track “Bloody Nose” is reminiscent of Artwork while “Cathedral Bells” is reminiscent of an old favorite.

“It’s so fucking cool. Vibe-wise, it’s like very mellow. There’s nothing like that that we’ve done before. I would say it has a “Blue and Yellow” vibe, but it doesn’t sound anything like that song. Me saying that, it’s going to confuse you when you hear it, but as far as what I think the vibe goes, it reminds me of that a bit.”

The Used spent their intimate US tour delving into the past and playing songs they hadn’t done live in years, if ever. “It’s been really fun being able to revisit some of these songs. And being able to play some of these old jams has been great, too—stuff that we haven’t played in like 20 years. Some of them we’ve never played. Day of the show, Bert would make up a set list and we’d play it.”

But Heartwork isn’t just about honoring the past. This album marks The Used’s first musical venture with guitarist Joey Bradford who joined the band in early 2018. Though the writing and recording process has always been fluid from album to album, Heartwork came about in a natural, stream of consciousness way that Howard says brought the band that much closer together.

“THAT’S WHAT WAS SO AWESOME ABOUT THIS. IT WAS STREAM OF CONSCIOUSNESS; WE WERE ALL JUST LETTING IT GO.”

“We were so close-knit about all of it,” he says of the writing process.

According to Howard, they entered the studio with material for more than 20 songs, but scrapped them all to start from scratch. While this isn’t out of the ordinary for them, Howard says “relaxing” and just letting the music flow organically was the direction they opted to take.

“It was really interesting, and it flowed so easily. I think that’s what was so awesome about this. It was stream of consciousness; we were all just letting it go. Sharing ideas on each part, which we did in the past but maybe not as openly.”

Even without a pandemic causing mayhem on a global scale, the music industry is tumultuous and The Used is no stranger to conflict in its 20-plus year lifespan. After splitting with founding member and longtime guitarist Quinn Allman in 2015 and later dismissing replacement Justin Shekoski, the act of creating music has brought The Used closer not just as a band but as friends.

“WE ARE A FAMILY. WE’VE BEEN DOING THIS FOR FOREVER, AND IT’S AWESOME TO WATCH IT GROW.”

“Everybody grows and everybody changes, but not everybody sticks with friends with for that long,” Howard says. “You start families, you get stuck in your own worlds, but we are a family. We’ve been doing this for forever, and it’s awesome to watch it grow. Our crew is the same, our crew is our family. We try to keep the most positive and most respectful people on our crew, and we want those people to surround us and be with us and become our family. It’s really awesome to have a tour family.”

While it can be difficult to look past the aggravations of social distancing and self-isolating, Howard rests easier knowing it won’t last forever. “This is a trying time for all of us. Everybody is going through the same thing, we’re all in this together.”

While being mindful of today, Howard is focusing on all the good that is to come. “I’m really excited to start touring again. The next tour, I can’t even say anything about this tour, but the tour that we’re going to be on hopefully around July is going to be epic. It’s going to be incredible. We’re going to play a bunch of new songs, some old favorites, and keep looking out. We’re still here.”

ESCAPE THE FATE: Fate and Legacy