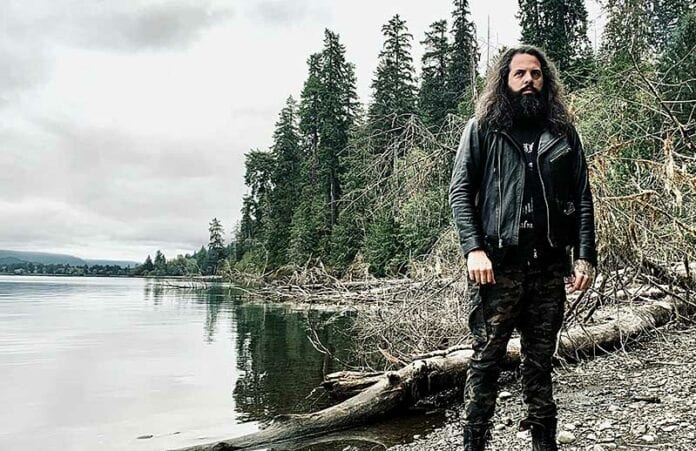 Abigail Williams is one of the most diverse bands in modern metal. Their earlier material was the perfect combination of melodic and technical with plenty of black metal influences. But the band’s newest release, Walk Beyond the Dark, introduces a more evil atmosphere to Abigail Williams’ signature sound.

Abigail Williams endured many lineup changes throughout the band’s existence, and today, the band is solely run by mastermind Ken Sorceron. Abigail Williams has also been through a lot of ups and downs, which was one of the main influences behind this album, as well as focusing on the future and new beginnings.

We spoke with Sorceron about the writing behind Walk Beyond the Dark and the band’s tour with Ensiferum, Kalmah, and Aenimus.

Let’s go right into the new album, Walk Beyond the Dark. This album stands out from your previous material, yet it still holds the same ‪Abigail Williams style. What’s your secret? How do you grow and evolve with each album and still hold the core of ‪Abigail Williams’ style?
When I’m writing new music, I just let whatever comes out happen naturally, and I don’t try to shape it consciously, so that whatever music that comes out is coming from that same part of myself that it usually would. Of course, as a musician or artist, I grow and evolve and incorporate new ideas into the sound, so over time the style will shift and take on different tones. But at the heart of it, I’m still the same person, so it’s natural to still retain a signature imprint within the music.

The whole album blends together really well. Did you approach the writing differently with this album?
Not really. This album was written over the course of many years, which is not too uncommon for how I usually work with this band. I just built up a nice stack of songs and then chose the ones that I thought would fit the album and work together best at this point in time.

“IT WOULD BE NICE TO EXPLORE THE CLEANER SIDE OF THINGS AGAIN, AND FOR THESE PARTICULAR SONGS, THAT APPROACH TURNED OUT TO BE PERFECT.”

Compared to your previous album, The Accuser, the production on Walk Beyond the Dark is a lot cleaner. Why did you take this route?
I think it’s just a natural reaction to making such a sonically distorted record, which was on purpose. Naturally, I thought it would be nice to explore the cleaner side of things again, and for these particular songs, that approach turned out to be perfect.

How does the album’s concept tie into the cover art?
I feel like the artwork realizes the concept of the album title as well as the songs sonically. The artwork really speaks to the atmosphere of the record, and when I was working on picking out art for the album, this one immediately spoke to me as the right one.

You have been the sole songwriter for the band for an extremely long time. However, this is the first album where you’re technically the only ‪Abigail Williams member and you collaborated with other musicians for the album. What was the writing and recording experience like in this aspect?
I guess this is the first time I’ve really thought about it like this because I’m so used to working with different people in different albums that it didn’t even occur to me that I might be the actual band member playing on the album at the time. While I can see how it seems like that to the outside, to me it still seemed like a band when it was all said and done, because Bryan O’Sullivan played bass on the record and he has been working with the band and playing live with us since 2011. So, even if he wasn’t around for the writing of the material, he still performed on the album. Maybe it’s because it was a good group of friends that played on the album that it just seemed normal.

“THE BAND HAD SOME DARK TIMES OVER THE YEARS, AND IT’S TIME TO WALK OUT OF THOSE TIMES.”

Walk Beyond the Dark is a reflection of Abigail Williams’ career. How does this set the pace for the future?
The band had some dark times over the years, and it’s time to walk out of those times. It feels like the end of one era of the band and the beginning of another, where everything I’ve done and experimented with since the band started has coalesced into this grand statement. It feels like the perfect realization of the band thus far, like everything old turned into something new. And that mixture gives me a new base to spring off of. Of course, you never know what’s going to happen with the style, but this feels like wrapping up what came before and now looking forward to what happens next.

You have a tour with Ensiferum, ‪Kalmah, and Aenimus. It’s definitely an interesting and unique package. Do you think it’s good to bring more band diversity in a tour package, as opposed to touring with bands of a similar sound?
I think it could go either way. Sometimes with a diverse package, people will complain about it if they really like one style but not another. But ultimately, we’re all fans of metal, and it can get pretty boring to see four bands with a similar sound. Not just for the audience, but for the bands themselves if you’re on tour and hearing that same exact sound every single night. I think everyone can enjoy a bit of variety.

You were touring with The Faceless for such a long time. Are you looking forward to playing ‪Abigail Williams material again?
Definitely. I did a couple tours for Abigail during the time of singing for The Faceless and again right after, but it’s good to finally have my complete focus on this band for the most part. Of course, I still have Lord Mantis, but there was a point there where I was singing for The Faceless, filling in on guitar for Tombs and Cobalt live, and also singing for Wolvhammer live. So, I didn’t have a whole lot of time to dedicate to the band.

How much new material will you play on this tour? Are you anticipating the fans’ reactions?
I think we will play mostly new material and work in at least one older song. This is pretty common for this band. I usually like to come right out the gate playing mostly stuff off the new album when we have a new record. Of course, people will complain and say they want to hear the older songs, but there’s only so much time in a set. On a headlining tour, we would have more time to play a couple older ones, but it’s still hard to make everyone happy, especially with such a diverse catalog.

Who will be touring with you? Anyone new?
For this tour it’s going to be Vance Valenzuela [Vale of Pnath], and Bryce Butler still on drums, of course. Looking at next year’s touring and who is available, I’m working on a very sick lineup for our touring then, too.

What are your future plans? Anything Abigail Williams fans should expect for 2020?
Expect us to be out there doing what we do live. I’d also like to work on some new material. After all the detours over the years, I’m digging into Abigail a lot more now, so I think the next album will come a lot sooner than the previous ones have.

Angel Vivaldi and Nita Strauss Interview Each Other