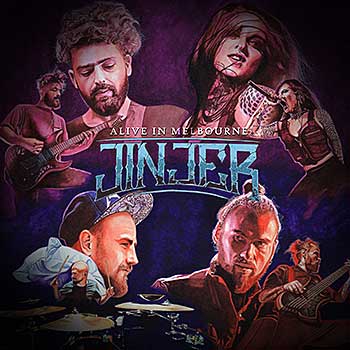 Before the global pandemic shut everything down in March of 2020, Jinjer traveled to the Land Down Under for its first leg of their Macro world tour and recorded their very first live album, Alive in Melbourne. The 17 tracks represented here (including an intro and outro) are the band’s greatest hits across its entire discography.

After the long four-minute “Intro,” first proper track “Teacher, Teacher!” from 2019’s EP Micro, explodes with savage energy as the audience erupts in delight. Tatiana commands the crowd with her amazing vocal range, as she’s able to seamlessly shift from scathing growls to higher harmonies to raspy mid-ranged vocalization at the drop of a hat, while her fellow comrades unleash a powerful flurry of rhythmic thrusts and drop A, downtuned djenty riffs. “Sit Stay Roll Over” from 2016’s full-length King of Everything evokes enthusiastic crowd chants, while “I Speak Astronomy” and “Who Is Gonna Be the One” go over with the crowd equally fantastic. The funky, djenty downtuned riffs of “Noah” easily fit right in with the reggae-esque segments of “Judgement (Punishment)” and “Home Back,” while the all-out death metal assault of “Retrospection” and “Pit of Consciousness” incites the crowd into a splendid fury, while the incredible encore “Pisces’ completes the set list, followed by the “Outro.”

The balance of the audio mix and sound throughout the record is incredible—with little to no overdubs—as far as we can tell. All the instruments are mixed perfectly with the right amount of tone and consistency, thus giving the listener the experience of a raucous and energetic live show. Plus, the excitement level is easily heard as the audience participation really shines through at all the right moments.

For Jinjer to release a live album to hold fans over through this pandemic was an excellent decision. Hopefully live shows will start happening sometime soon so Jinjer can once again entertain their throngs of fans in the flesh. This show was filmed and streamed live on Knotfest.com at the time, so hopefully a live concert DVD is in the band’s future plans. ~ Kelley Simms