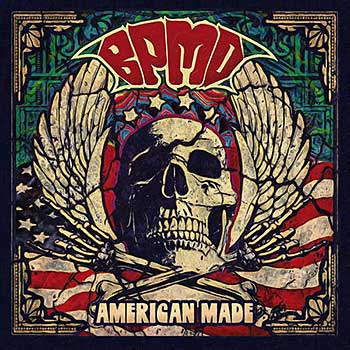 HARD ROCK/METAL: One of the greatest eras in music was 1970s American hard rock. Ruled by a bunch of heathens such as Ted Nugent, ZZ Top, Aerosmith, KISS, and the like, this decade of excess created timeless tunes that still hold up well in 2020. BPMD, featuring charismatic frontman Bobby “Blitz” Ellsworth (Overkill), drummer Mike Portnoy (ex-Dream Theater, The Winery Dogs, Sons of Apollo), bassist Mark Menghi (Metal Allegiance), and guitarist Phil Demmel (Vio-lence, ex-Machine Head), has created 10 of the most metallic cover versions of classic 70s hard rock tunes of the day on its debut album American Made.

One night last summer, Menghi was sitting by a campfire in his backyard with his family when Lynyrd Skynyrd’s “Saturday Night Special” came on and his son suggested that his dad play it in his band (Metal Allegiance). This immediately sparked a phone call to Ellsworth, which in returned evoked a call to Portnoy and then Demmel. Everyone was soon on board and the BPMD project evolved quickly and organically. The rules were simple: each member picked two songs—with no arguments from the other members allowed—while the other two tracks (“We’re An American Band” and “Walk Away”) were wild card picks voted on by all four members.

Things begin as frenetic as ever with the band’s wild rendition of Nugent’s “Wang Dang Sweet Poontang,” complete with the perfect wailing introduction banter from Blitz, while the excellent follow-up “Toys in the Attic” from Aerosmith equally fits right in Blitz’s vocal wheelhouse. Third track “Evil,” sometimes listed as “Evil (Is Going On),” is a Chicago blues standard written by Willie Dixon, recorded by Howlin’ Wolf in 1954, and later performed by Cactus, making this tune a cover of a cover of a cover! The blazing track possesses a hefty bass groove, quick drum fills, and howling vocals. ZZ Top classic “Beer Drinkers & Hell Raisers” sounds phenomenal here, as the band manages to keep the original song’s DNA while adding their own musical flavor. Lynyrd Skynyrd’s “Saturday Night Special,” Menghi’s first pick and catalyst for the whole project in the first place, is decorated with Blitz’s unique vocal lines and the band’s cool instrumentation. Blue Oyster Cult’s “Tattoo Vampire,” probably the deepest cut on the entire album, sounds like something Overkill would pull off, decorated with a punky/thrash metal hybrid style, while Van Halen’s “D.O.A.,” with its quick tempo, killer groove, and cymbal choked accents, is a ripping rendition—although they drag the ending out just a tad too long.

We usually don’t get too excited about an all covers album, but BPMD’s American Made is a worthy exception. The foursome make these covers their own by adding a modern, heavy metalized approach. ~ Kelley Simms

ACCEPT: Too Mean To Die