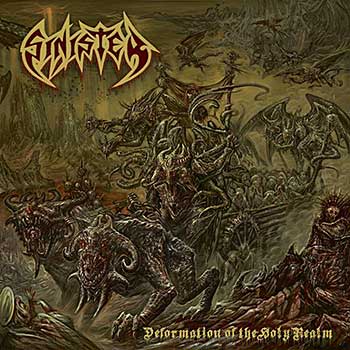 SINISTER
Deformation of the Holy Realm

DEATH METAL: In the interest of full disclosure, here’s a story for you. Near 20 years ago, Sinister got in touch with yours truly, asking if I was interested in trying out for a then-vacant second guitar position. As the band I was in had just broken up and I was looking for a gig, I appreciated the consideration, though I still have no idea how they tracked me down, or even why, as I had never publicly displayed any acumen for playing death metal. The obviously desperate plan they had in mind quickly fell apart once the Dutch death dealers realized I live in Canada and that bit of distance might have kibosh-ed any hope of thrice a week rehearsals (this was 2001, remember). All of the above occurred on the eve of their fifth album, Creative Killings, and the band, save for a brief hiatus from 2003-05, has been alive and kicking ever since with an ex-members list as long as your Netflix pandemic watch list.

In the same way that no one should be shocked that full-length number 14 comes hurtling down the pipe after 3/5th of the lineup was overhauled following previous album, 2017’s Syncretism, there’s no surprise that Deformation of the Holy Realm puts ferocious Floridian meat ‘n’ potatoes death metal with a euphonic European edge on a pedestal. That’s a fancier way of saying Sinister continues to offer death metal with a sense of melodic class that rises the band above the old school stomp and sludgy sewer grate scraping so prevalent and popular these days.

Once past the irritating intro, the album commences on a high note as the title track locks and loads with a storming, martial riff that possesses a chromatic lurch and surprising amounts of swing buried beneath the blasting and double kicks. The guitar overdubs are comically punched in, but work in raw concert to drop extra layers of pinky finger executed, string skipping harmony in the same way the US military drops bombs on uncooperative oil rich nations—with a big ol’ bang. Unfortunately, a discouraging similarity between the high register excursions of the title track and next song, “Apostles of the Weak,” is what follows. It’s almost like the band enjoyed the idea so much that they decided to recycle it and hope no one would notice. The track does redeem itself with backing vocals ranging from choral baritone to Brutal Truth and a splash of simple, but effective, soloing. This is, however, where the limited range of Sinister’s style and approach becomes glaringly obvious—if it already hasn’t at some point over the course of the previous 13 albums and 32 years. As a result, too much of the album finds itself dragging large chunks of established momentum through a gauntlet of apprehension and synonymy.

What’s most frustrating about Deformation of the Holy Realm is how the band can take that aforementioned batch of elements—brutal and catchy riffs, well sculpted but controlled leads, unique vocalization—and sculpt them into songs with noticeably varying quality. Stacking up the milquetoast repetition of “Scourged by Demons,” the staid robotic staccato of “Oasis of Peace – Blood from the Chalice,” and the utter monotony of “The Ominous Truth” against the fervent energy and spidery maelstrom of “Unique Death Experience,” the Teutonic thrash tendrils of “Suffering from Immortal Death,” and a small-c classic like “Unbounded Sacrilege” where everything is synthesized to near perfection is an example of the regrettably wide berth of quality and consistency on this album. ~ Kevin Stewart-Panko

CRO-MAGS: Don’t Give In