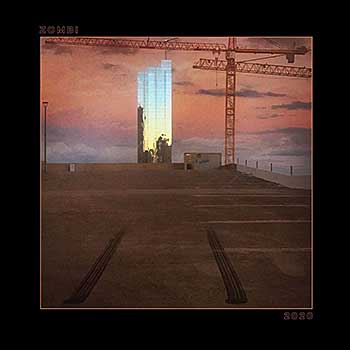 PROG HORROR SOUNDTRACK ROCK: With it being five years since their previous album (2015’s Shape Shift), the question that we’d like to pose A.E. Paterra and Steve Moore is whether the title of their latest album was selected beforehand, or was it a game time decision in recognition of the cluster fuck 2020 has been and will continue to be?

Zombi has historically been held in high regard for their progressive rock instrumentals originally born from the inspiration provided by Goblin, specifically their soundtrack work on Romero’s zombie flicks. This penchant for and attraction to the apocalyptic, whether real or fictionalized, has powered Zombi through six albums, and while they haven’t strayed dramatically from their roots on 2020, they’ve strayed far enough to make it noticeable.

The compositions are thicker, denser, and appear to employ greater layers of instrumentation. Additionally, much of the instrumental filling up has been matched by a fuller and busier rhythmic approach. Lead off track “Breakthrough & Conquer” is a high energy whirl through the world of 80s action movie soundtracks, Rocky Balboa training sequences, and Don Johnson car chases. “XYZT” makes use of what appears to be three keyboard lines, possibly two bass tracks, and a scampering, almost jazz fusion, drum pattern. “No Damage” chalks up Gary Numan’s take on doom rock, and “Earthscraper” sounds like what might happen if the super stars of stoner metal weren’t deathly afraid of Taurus pedals. Even those spots where they revert to sounding too much like Goblin or Dawn of the Dead, as in “Family Man,” there’s a rumbling, buzzy bass tone driving the song that makes several nods to Rush’s “Subdivision.”

Keeping things compact and stacked agrees with Zombi. This strength becomes noticeable when the band presents riffs/songs that make more intensive use of roomy progressions, ample sequences of sustained chords, and looser percussion patterns (“Mountain Ranges”). Here, the established energy is drained and the excitement taken down a notch, though considering we’re only halfway through this year and just reaching peak fucked status, an opportunity to catch a breather might be more than welcome. ~ Kevin Stewart-Panko