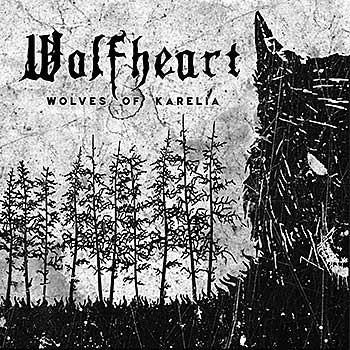 MELODIC DEATH METAL: It wasn’t until their third album—2017’s Tyhjyys—that Wolfheart claimed their spot among the vanguards of the latest wave of Finnish metal. Lead by Tuomas Saukkonen, whose previous projects include Before the Dawn and Black Sun Aeon, Wolfheart’s initial outings revealed a band steeped in high level musicianship but struggling to create a sound distinct enough to break free from the pack of generic melo-death outfits popping up around Europe. With Thyjyys however, the band unveiled a thrilling amalgam of folk and doom with the kind of ginormous riffs and breakneck tempos that underpin that subgenre. Less than two years later, the Finns released Constellation of the Black Light, which subtly expanded its predecessor’s vision by incorporating doomier overtones and a heightened focus on atmospherics. With Wolves of Karelia, the band has exceeded all previous efforts, turning in Wolfheart’s finest and most ambitious work to date and notching new highs in both songwriting and production.

Stacked to the rafters with riffs hot enough to boil iron, one could certainly enjoy any of Wolves of Karelia’s eight tracks on their own. However, Saukkonen based the album on the 1939-1940 Winter War between Finland and Russia, and in this context, Wolves of Karelia takes on a broad cinematic expanse, along the lines of a concept album. Openers “Hail of Steel” and “Horizon on Fire” deal out waves of pure sonic ferocity playing out in corrosive riffs and an unrelenting siege of blastbeats. While the tracks open with softer elements, the acceleration into surging death metal extremity is rapid and marks a notable departure from the moodier hues of the previous two outings.

Thematically, the tracks consider a civilian point of view during the first waves of Finland’s invasion by the Red Army, setting alight a powder keg of brutality both in the historical and sonic context. Following the one-two punch of “Reaper” and “The Hammer,” “Eye of the Storm” marks the album’s halfway point with a transfixing instrumental interlude driven by sparse acoustic patterns and mournful swaths of piano. More than giving listeners a breather, the track underscores Saukkonen’s continued evolution as a songwriter and his commitment to incorporating whatever elements best serve the music and the story, rather than the subgenre.

Fans of bands like Insomnium and Amorphis will find much to love here. All of those elemental aspects of European melodic death metal are here—intricate song structures, pulverizing tempos, and the kind of soaring and deeply emotive guitar solos that are meant to be played from the tops of mountains. “Ashes” closes out the album with a somber intro that builds to a breathtaking climax of sweeping atmospherics, chest pounding power chords, and a dizzying onslaught of blastbeats. Saukkonen recently told Outburn that he wrote the entire album in just over a month, and the way the songs all fit together, it’s hardly surprising. There’s a sense of synergy and cohesion here that hasn’t appeared on previous outings. Wolfheart’s latest effort is a fist-pumping triumph from start to finish. Wolves of Karelia now stands not just as Wolfheart’s best work yet, but one of the finest releases of 2020. ~ Joe Daly