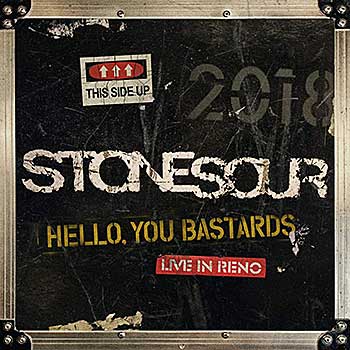 SENDING THE CROWD HOME HAPPY: Concentrating mostly on the latter entries in their canon, Hello, You Bastards: Live in Reno, Stone Sour’s first official live release, finds the band running through nearly every track from their latest full-length Hydrograd during a set in Reno, Nevada on October 5, 2018, which makes perfect sense seeing as how it’s their most critically acclaimed album to date.

“Knievel Has Landed” sets the pace early on with heavy riffs and vocals that wade into Slipknot territory from frontman Corey Taylor, followed brilliantly by the equally heavy “Whiplash Pants.” From there, Hello, You Bastards: Live in Reno’s set list opens up a bit, with memorable House of Gold & Bones Part 1 standout “Absolute Zero,” one of the band’s best ever cuts. Speaking of their all-time best tracks, Taylor and company break out the classic “Bother,” which finds the entire crowd in unison singing along in a truly beautiful moment. The second half of Hello, You Bastards: Live in Reno is straight fire, beginning with Come What(ever) May’s opening track, “30/30-150,” before transitioning directly into “Get Inside,” one of my personal favorites from my most-liked Stone Sour record, their eponymous debut. “Song #3” picks things up from there, carrying into the requisite ballad “Through Glass,” two heavy hitters that have become synonymous with Stone Sour set lists. The latter finds the cumulative voices of Reno hanging on Taylor’s every word once again. And if that wasn’t enough, the band comes back out for an encore comprised of “Made of Scars” and “Fabuless,” two tracks that went a long way in sending this crowd home happy.

As far as live albums go, Hello, You Bastards: Live in Reno is as solid as they come. All of the expected singles and hits are here, and while the band spent a sizeable portion of this release focused on their more recent releases, they still did a good job paying homage to the songs that got them to this point. Hello, You Bastards: Live in Reno is ultimately a satisfying listen, especially at a healthy 67 minutes. ~ Brian Campbell