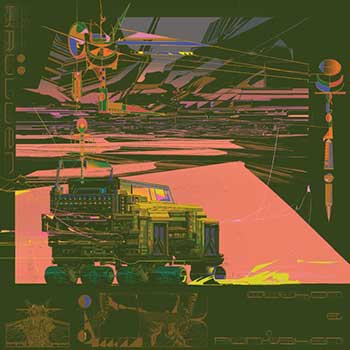 DRONEGAZE: One of industrial music’s enduring visionaries, Author & Punisher (aka Tristan Shone) has spent nearly 20 years charting a trajectory that’s seen his albums evolve from the bludgeoning aural assault of mid-noughties fare like The Painted Army (2005)and Warcry (2007) to the doomy splendor of 2018’s Beastland. Trying to pigeonhole his expansive sound is a fool’s errand. In addition to more prominent elements such as industrial, doom and drone, Author & Punisher’s catalog boasts just as much techno, dub, and drum and bass. It’s a visionary amalgam rendered all the more unique by the fact that the music is written and performed entirely on custom instruments designed and built by Shone. Surrounded by futuristic consoles, large, tactile controllers, and a rectangular microphone array that invites more than a few comparisons to Bane, Author & Punisher’s mesmerizing live show has seen him growing out of the cramped, sweaty clubs of his San Diego home to a support slot with Tool on a recent North American arena tour.

Author & Punisher’s earliest outings struck far beyond the perimeter of what most people might consider to be extreme music. Amid its pummeling industrial ferocity boiled a seething tension in both the sheer heaviness of the compositions and the sprawling expanse of their scale. It’s not that the music lacked melody, but rather the innate chaos and oceanic heaviness of the sound pushed it further back in the mix. Beastland, however, saw the artist opening new realms of possibility by adding spacey atmospherics and stirring gothic melodies. On Krüller, Author & Punisher expands this vision even further, pushing the melodies out front and center and opting for clean vocals from stem-to-stern. The effect is majestic. Beyond a wall of droning synths and the low-end buzz of a sub-oscillator, tracks like “Centurion” and “Drone Carrying Dread” showcase velvety harmonic layering, glistening hooks and a gripping emotional core not before heard in his work. But it’s the unambiguous nods to post-punk and new wave that infuse Krüller with its most resonant charms. Think Depeche Mode and Neurosis smoking opium on a runaway spaceship.

To Krüller’s expanded compositional outlook, Shone enlisted a slew of collaborators, including Tool’s Justin Chancellor (bass on “Centurion”) and Danny Carey (drums on “Misery”), As I Lay Dying’s Phil Sgrosso (guitar and co-songwriter), and Jason Begin, aka Vytear, (co-producer, mixer, and “Blacksmith” co-writer). There’s also “Glorybox,” a sublime Portishead cover that signals a second half shift to a more upbeat and, at times, even blissful outlook for the final three tracks (including “Blacksmith” and the closing title track).

Don’t get lost trying to identify all of the influences and reference points that you might hear threaded throughout this record. Krüller is a deeply immersive experience that demands to be played beginning to end in order to tap into its immense cosmic potential. This is easily Author & Punisher’s finest and most accessible outing yet and thankfully, these qualities have emerged without Shone pulling back his sense of ambition or innovation. Quite the opposite, Krüller is an unmitigated masterpiece that sees Tristan Shone operating at the very top of his game. ~ Joe Daly

THE PLOT IN YOU: Dispose