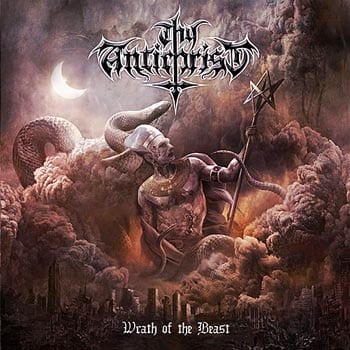 THY ANTICHRIST
Wrath of the Beast

BLACK METAL: The Thy Antichrist story is an interesting one. Originally formed as El Anticristo in late 90s Medellin, Columbia, the band persevered in relative obscurity until frontman, Andres “Antichrist 666” Vargas upped and moved the band to its present Dallas home base. Members came and went, a shit ton of makeup, face paint, and skin grease was purchased, the theme of Nietzche’s The Antichrist remained adhered to, and after years of obscurity on American soil, a deal was secured with Napalm for Wrath of the Beast. Okay, the story’s not that interesting, but Thy Antichrist’s journey is a bit different and the same can be said for its musical approach. At its heart, violent strains of frosty Scandinavian black metal are vomited forth. Rotor whipped guitars rapidly blaze through chromatic half-steps, helipad double kicks, and imperial sounding midsections. Think 1349, older Immortal, and Mayhem standing on a wind whipped fjord and all that jibber-jabber. What Thy Antichrist adds to the mix are acoustic interludes that straddle a line between Latin-tinged despair and Metallica’s classic ballads. As well, guitarist Robert “Abyssus” Coronado’s punch-ins possess superior melodic strength and drummer Chris Stropoli—who’s drum kit is excessive—makes good use of tools and talent to add a rapid-fire tribal pulse and a percussive flair not often found in black metal. ~ Kevin Stewart-Panko

TIMES OF GRACE: Songs of Loss and Separation