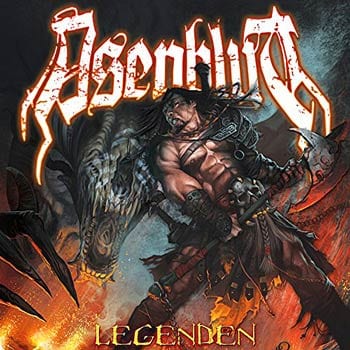 VIKING MELODEATH 2.0: Two years after their third—so what if we sound like a lightly blackened Amon Amarth turned up to 11?—album, Berserker, Germany’s Asenblut returns to its old stomping grounds with Legenden. The five track EP includes updated treatments of four songs from the band’s 2009 debut, Aufbruch, plus a Manowar cover (“God or Man,” and it’s surprisingly good). Asenblut’s take on melodic death metal benefits from the tighter format, and the modern production fits their sound far better than the vaguely OSDM vibe of the source material. The band’s eponymous song, in particular, benefits from the everything’s super loud now treatment. Tetzel, the founding vocalist, gives a more consistent, if less quirky performance, but the real improvement is the guitar tone of Claus Cleinkrieg and Yri. The grand irony, of course, is that the EP from which the Manowar song is pulled contained all new material meant to point the way forward to that band’s next album. Instead, Legenden is Asenblut’s victory lap. Granted, Berserker was/is arguably Asenblut’s best release to date, and new fans would do well to check out Aufbruch, but other than that, there’s scant reason to revisit the band’s early days. To put it bluntly, when your entire discography merits comparisons to a previously established genre touchstone, you might do well to, you know, just release new material. Regardless, Legenden is potent, and that certainly counts for something. ~ Nick DeMarino