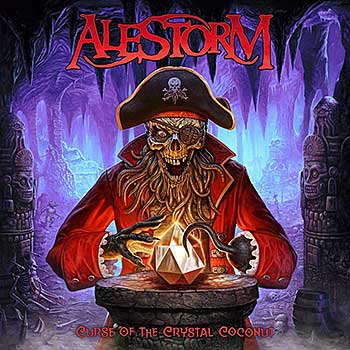 ALESTORM
Curse of the Crystal Coconut

PIRATE METAL: Despite what anyone, from casual observers all the way on down to the true metal brigade, may think of Alestorm, it’s patently obvious that Alestorm gives less than a fuck about what anyone thinks of them. Thick skin is prerequisite if you’re playing pirate metal in the first place. But, given how far they’ve run with the shtick, immunity from criticism is undoubtedly a front pocket super power in the world of these true Scottish pirate metallers. This is especially true in 2020, as Curse of the Crystal Coconut heaps on layer upon layer of cheese and questionable creative decisions as the band cherry picks from, and slinks into, new territories.

Album opener “Treasure Chest Party Quest” may be part tongue-in-cheek self-assertion, part “fuck you,” and all satirical statement that listeners can take as seriously or lightheartedly as they wish—or malign the band to their heart’s content. The fact that the song emerges from behind a veil of 80s cock rock with the usual folk metal adjunct and a bellowing metalcore vocal staccato is an indication from the off that Alestorm is flirting with reinvention and doing it as absurdly as imaginable. Who the hell else would consider pairing creatively passé elements like a pirate metal three-step waltz and Clawfinger-esque rap metal with a straight face (or one twisted by laughter, for that matter) as done on “Tortuga”? A femme vox/prom dress metal interlude unnecessarily spins “Zombies Ate My Pirate Ship” towards irrelevance quicker than you can use the “dog ate my homework” excuse for incompetence and/or laziness. Draw your own parallels. “Shit Boat (No Fans)” plays out more like frat house taunting than metal song, with the “Your pirate ship / Can eat bags of dicks” refrain making this track a lamentation that there never was a combination of the Revenge of the Nerds and Pirates of the Caribbean franchises. On the other hand, the Alestorm of expectation is out in full force with the “Yo-ho-ho” infectiousness of “Pirate’s Scorn” and “Pirate Metal Drinking Crew,” giving fans what they want—scallywags being thrown into the brig and the band drinking everything in sight as middle fingers are held aloft in the direction of detractors.

That’s not to say everything here reeks of untethered daring and rote slapstick. “Fannybaws” is infectious both for its chugging major key riffing, epic chorus, and the manner in which vocalist/keyboardist Christopher Bowes rolls his R’s like a drunken Spaniard throughout the tallest of tall tales. “Chomp Chomp” belies its ridiculous topic—it’s as if The Asylum wrote a song about a mutant crocodile instead of filming an absurdist B-movie about one—with galloping thrash darkness and a solo section reminiscent of early Anthrax. “Wooden Leg Part 2 (The Woodening)” is an eight minute, multi-faceted take on prog metal storytelling accented by mournful thrash, symphonic blackness à la Bal-Sagoth and even smidges of death metal. Then, there’s “Call of the Waves,” a metaphoric ode to self-help and independence set to a back drop of triumphantly ascending and dynamic songwriting—quite possibly the band’s most serious moment of its career.

Still, the overall air of Curse of the Crystal Coconut leans heavily on the jocular side of the spectrum. But, as the band’s sixth album demonstrates, Alestorm is making moves towards the growth and expansion of their capacities, regardless of how misguided some of those efforts are and are going to be perceived. Whether the majority of the public embraces any of this as maturity remains to be seen and is another story altogether—remember “Your pirate ship / Can eat a bag of dicks”—but the forward movement is there should you care to stop and listen. ~ Kevin Stewart-Panko