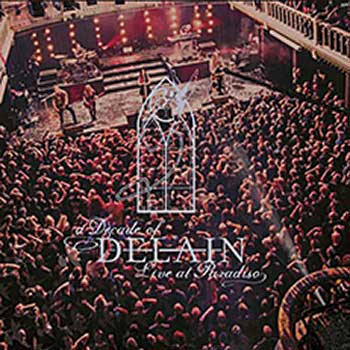 DELAIN
A Decade of Delain: Live at Paradiso

SWEET SYMPHONIES: In commemoration of its 10th anniversary, Dutch symphonic metal six piece Delain took to the iconic Paradiso in Amsterdam for its first live album. The sold out event featured a wide swath of fan favorite tracks and hidden gems across the band’s discography. The DVD/Blu-ray portion of this celebratory collection illustrates the electric atmosphere on an evening where past, present, and future of Delain merged. Each member of the band radiates enthusiasm. There is no phoning it in, no gigging for a paycheck—this performance is based on passion and desire, evident from the powerhouse and exuberant frontwoman Charlotte Wessels. And what would a home country anniversary showcase be without a few famous friends? Among the guests throughout the near two hour set were Alissa White-Gluz of Arch Enemy, haunting vocalist Liv Kristine, Fear Factory frontman Burton C. Bell, and a video cameo by Marco Hietala of Nightwish. Honing in on choice cuts could prove tedious over the course of an event that reads like a greatest hits, but the concert kickoff “Hands of Gold” alongside White-Gluz and potential show stealing rendition of “The Gathering” are worthy of repetition. A Decade of Delain: Live at Paradiso is a must for fans and an inviting sampler of one of the genre’s finest. ~ Dillon Collins