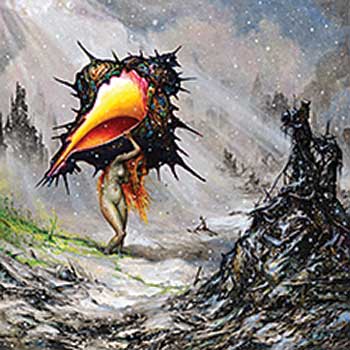 CIRCA SURVIVE
The Amulet

PROG GOOD LUCK CHARM: Anthony Green has stated that The Amulet is a “rebirth for the band,” a sixth record simultaneously rewiring what Circa Survive is capable of and the way in which their fans perceive them to fit into today’s creative landscape. The Amulet is a psychedelic and transformative trip, where the vocalist alternates between madman, revolutionary, and voice of reason, sometimes all within one song. Each track paints a picture, the canvas of which feels malleable and adaptable to Green’s every vocal whim. “Never Tell a Soul” sews together the band’s affinity for nightmarish background vocals that eerily surround the listener with otherworldly melodies. Lyrically, The Amulet is a sad composition, aiming for contemplation of life’s most sour questions, but ultimately promising hope. “Flesh and Bone” stands out beautifully, once again demonstrating the heights of mercurial vibrations that Circa Survive has solely invented. They’ve never shied away from their own benchmarks, challenging their loyal fan base to do the same, pushing the boundaries of creative voice and exploration. Though Green and crew have always been a unit unimpressed by iconic status, The Amulet is likely to add another jewel to their crown, forcing them higher and higher on the ladder of stardom. ~ Jameson Ketchum