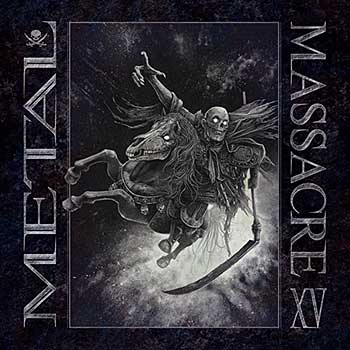 METAL’S FUTURE TENSE: Every headbanger worth his/her salt is aware of the historical importance of the Metal Massacre series. The compilation’s 1982 debut exposed the world to Ratt and some other band called Metallica with subsequent editions from II to XIV shining light on the likes of Slayer, Voivod, Possessed, Hellhammer, Armored Saint, Confessor, Toxik, Ravencult, and so on and so forth. In association with Decibel, version XV was curated by the magazine’s editor, Albert Mudrian, and designed to peel back layers on what is a miniscule helping of the metal’s present-day diversity.

The compilation’s opener has Midnight being Midnight with “Masked and Deadly,” while Poison Ruin offers up one of the bigger surprises on “Demon Wind” by force feeding anarcho punk and the NWOBHM into a Fostex 4-track recording in a tool shed. Fuming Mouth does a great job keeping it Swede-y with classic buzz saw death metal vomited forth at various crawls and sprints. Many Suffer has former My Dying Bride guitarist Calvin Robertshaw doing what you’d expect a former member of My Dying Bride to do—killing a few more brides by driving his guitar tone and amp collection over them slow and slower, while the equally morose Temple of Void’s “Leave the Light Behind” is powerfully mopey death/doom to slit wrists, tie hangman’s knots, and, curiously, watch Dr. Who reruns to. On the other end of the speedometer, Ripped to Shreds D-beat and death metal their way through Repulsion’s collection of Nihilist and Exhumed demos and Rude’s guitar tone exemplifies their moniker as they live for death in salutation of Possessed and Autopsy. Midnight Dice’s “Starblind” makes us really miss Christian Mistress a lot more than realized, Smoulder’s “Warrior Witch of Hel” ranks in the band’s top moments of their short existence, mainly because they’ve learned to tune up their epic doomy metal, and Mother of Graves rounds out the affair with a hearken back to The Gathering’s heavier doom days.

Chances of any of these bands—or any band ever again—growing to the heights of Metal Massacre alums Metallica ain’t gonna happen, but that doesn’t mean there aren’t goodies waiting to be unearthed and maybe a new favorite band waiting to be stumbled upon by someone somewhere. ~ Kevin Stewart-Panko