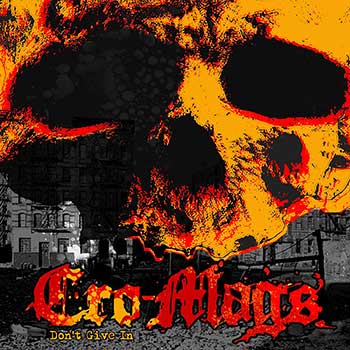 CRO-MAGS
Don’t Give In

DOWN BUT NOT OUT: The dust has finally settled (for now, at least) when it comes to the verbal sparring, litigation, and real life violence that has defined the self-destruction of the Cro-Mags. Acrimonious doesn’t even begin to describe the level of back and forth spit between band founder, songwriter, and bassist Harley Flanagan and the man many feel is one of the definitive voices of old school NYHC, John Joseph Bloodclot.

The music is what matters, of course, and on that front Flanagan has always been relatively active, recording new material under the Cro-Mags name, as well as with Harley’s War and his eponymously titled solo project. This latter release is the most telling when it comes to the direction of this new Cro-Mags EP. Flanagan’s stripped-down ‘n’ simple, Discharge influenced style of metallic hardcore was put on full blast with his 2016 full-length, and Don’t Give In follows much in this same vein.

The most obvious addition to the Cro-Mags soup is the addition of former Flanagan collaborator Rocky George, who most know from his tenure as the manic lead axman for Suicidal Tendencies during their thrash metal years. George has worked with Flanagan on both his older Mags material, as well as Harley’s War, and as a result this new material feels both confident and fresh.

The opening title track sounds sonically indebted to the band’s iconic “Age of Quarrel,” feeling like a rewrite of that album’s classic opening salvo, “We Gotta Know.” This is nostalgic in a way, but the song’s main riff abandons that feeling for a more original crossover hardcore attack. “No One’s Victim” is even more successful in this regard, reaching full-on thrash metal mode with an approach that feels like a bruising B-side from Best Wishes. Finally, “Drag You Under” is a bit bouncier, but don’t misunderstand, this is no pop punk affair. It’s a sure circle pit anthem—short, but oh-so sweet.

Flanagan has clearly recruited a tight group of musicians here, and this shows in how well this appetizer has been assembled. The drumming is tight, Flanagan’s bass and growls are spot on, while Rocky George…well, he’s Rocky George. He fucking rips. Only time will tell whether or not Flanagan’s Cro-Mags and the Bloodclot version with Joseph and drummer Mackie Jayson will co-exist out there on the road, but one thing’s for sure, these three tracks are a frontal assault for what will hopefully be one kick ass full-length. ~ George Pacheco