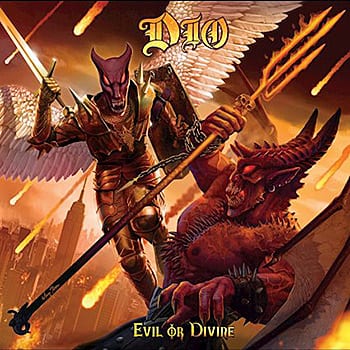 FLASHING HORNS FROM BEYOND THE GRAVE: It stands to reason that live records are being pumped out, and, in the case of these two 15 or so year old gems, reissued as a salve for all of us suckers for whom a large portion of their lives and social lives, if not occupations, revolve around live shows and tours. However, just as a livestream twists the knife by taking the same screen you stare at most of the day and getting you to stare at it even more, live albums at this time amplify how much nerds like me (and most of you) miss the ritual of leaving one’s place of residence to go see and hear bands do their thing in the flesh. Of course, the original intent upon the 2005 release of Evil or Divine: Live in New York and 2006’s Holy Diver: Live had nothing to do with adding insult to injury, but looking at it through the lens of the last year and (probably) the year to come, well, I’ve never pined more for insipid and overused between song stage banter, distended guitar solos, and completely unwarranted drum solos since I was a kid and thought Kiss actually were aliens and Venom were the earthly manifestation of Satan.

Remastered with new cover art and a host of format and packaging options, both these records are not just significant because they inadvertently pour salt in wounds, but because they’re being reissued at a time when the popularity of the late, great Ronald James Padavona and his band is arguably at heights only surpassed by the era in which Holy Diver and The Last in Line themselves were tearing up the charts in the early 80s. Following the ravaging suffered at the hand of grunge and its own creative inertia throughout the 90s, metal was experiencing a renaissance and upward trajectory in the early 00s when Ozzfest was a big deal, the New Wave of American Metal and metalcore were growing in leaps and bounds, the thrash revival was at its peak, and old school reunions and revivals were starting to be fostered by social media nagging.

Then again, aside from a brief two year pull on the emergency brake in the early 90s, Dio, the band, never stopped. They weathered waning attention, trends coming and going, audience size contraction, and life in the post-major label leagues. These two documents not only play up the band’s biggest hits (“Stand Up and Shout,” “We Rock,” “Rainbow in the Dark,” “Don’t Talk to Strangers,” and the title tracks from those first two albums), but throw in a few covers of related acts like Black Sabbath and Rainbow and are rife with all the concert clichés one would normally scoff at but are now missing in the same way you miss that crazy ex you couldn’t stand to have a conversation with but hung on to because they were unimaginably perverse in the sack.

There’s no need to go over the content with a fine tooth comb as anyone standing court as a member of Dio was a consummate professional, but a couple observations can be made when the two recordings are stacked beside one another.

Of the two, Evil or Divine possesses more energy with guitarist Doug Aldrich letting loose with more improvisational sleight of hand, as he can be heard throwing in pinch harmonics, adding inflections, filling space with brief runs and fills as he slides into and out of riffs with masterstroke timing.

On the other hand—and maybe this is because I’ve been barreling through nothing but these releases for a couple days now—one thing that becomes very noticeable when you listen to hours and hours of Dio is how a large majority of their songs utilize a similar plodding tempo with drum beats that are matched in their milquetoast linearity.

There are a couple of surprising moments where Dio’s voice takes a turn towards a gruff, almost melodic death metal growl when he’s exhorting reactions from the crowd. But he also tickles the stratosphere with his wailing, as expected and immaculately in key.

Holy Diver Live appears to be the victim of greater amounts of editing to tighten up the space between songs to the point where all that often remains is Dio delivering song title announcements, if that.

Evil or Divine includes a full side (on vinyl) of bonus tracks taken from late 90/early 00s studio albums as well as a Simon Wright drum solo that was apparently edited from the original release.

Damn, who would have ever thought that the inclusion of a drum solo would be a live album selling point? COVID has really done a number on everyone whether they realize it or not! ~ Kevin Stewart-Panko

DIRKSCHNEIDER: Live – Back to the Roots – Accepted!