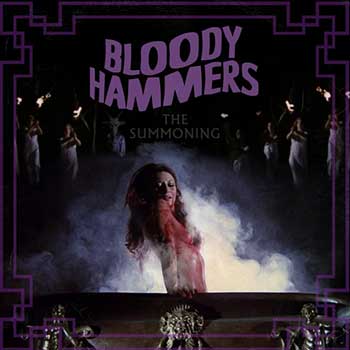 GOTH HORROR ROCK: When North Carolina’s Bloody Hammers first creepy crawled their way onto the scene in 2012, it was on Holland’s Soulseller Records. Though, to my mind, they plied a type of doom enshrouded in Hammer Horror imagery that always had me wondering why Rise Above Records weren’t all over them like brown on brown rice. Despite confounding with the morose death rock downer of previous album, 2016’s A Lovely Sort of Death, they’ve apparently being exploring and tapping into the spirits of Peter Steele, Andrew Eldritch, the souls of energy drink addicts, and black and white cathode ray televisions, as The Summoning presents a reinvention towards melodic goth rock with an image rooted in a combination of The Addams Family, The Munsters, and silent horror films.

Bloody Hammers’—vocalist/guitarist/bassist Anders Manga and his keyboard slinging wife, Devallia, joined by various hired guns—fifth album is an injection and improvement of everything from pace and melodic strength to cohesion and production value. The opening one-two punch of “Let Sleeping Corpses Lie” and “Now the Screaming Starts” are a pair of robust rockers making use of the combined DNA of The Sisters of Mercy’s First and Last and Always and Type O Negative’s October Rust in the creation of songs that could exist as accompaniment to drinking beer and raising headbanging hell in a fog shrouded cemetery as much as they could to goth gals twirling their floor length lace frocks on a dance floor. With Anders adding guitar to his responsibilities, it appears he’s become deeper connected with the nuance, feel, and spirit of the music. His vocal phrases are much more celestial and in tune with the riffs, changes, and accents behind him. There are some truly infectious and memorable choruses in “Tales that Witness Madness,” “From Beyond the Grave,” and “Fire in the Dark” being front-to-back one of the catchiest tunes these ears have heard all year.

Suffice to say, there are bugs continuing to be worked out—the title track flubs with maudlin mellow passages, “The Beast Is Coming Out” and “Welcome to Darkness” revert too far backwards into minimalist ennui, and “Condemned, The Prisoner” may be a smoky, sand swept ballad, but it lacks the requisite amount of haunting, emotional weight. Still, Bloody Hammers continues to develop as a work in progress and thankfully The Summoning moves them in a better direction. ~ Kevin Stewart-Panko