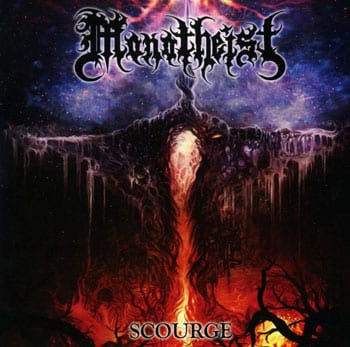 PROGRESSIVE DEATH: Proving that the Floridian death metal scene is still churning out new talent, Monotheist strides into view with a pummeling debut that will turn a lot of heads and hurt a lot of necks. With three consecutive tracks breaking the 10 minute mark plus many diversions away from simply beating the listener to death, they automatically land in the progressive death ballpark, not necessarily distinguishing themselves from their peers but penning a brace of compelling songs that merit repeated listens. Their mercilessness certainly plays in their favor, with the heavier sections of “The Great Chain at the Neck of the Earth” and “Mark of the Beast Part 2: Scion of Darkness” particularly brutal in their delivery. That said, their quieter moments are for the most part engaging, too, most often when they inhabit the territory in which Animals as Leaders lurk, their musical dexterity enthralling without coming across as too showy. This is definitely the case for the monstrous “Infinite Wisdom,” though it is perhaps the one-two punch of “Abominable Acts” and the title track that leave the strongest impression. Brutishly violent when they bring the thunder and captivating when they explore more expansive territory, they are executed with style and passion to spare, and hint at greater things to come. ~ Dan Slessor