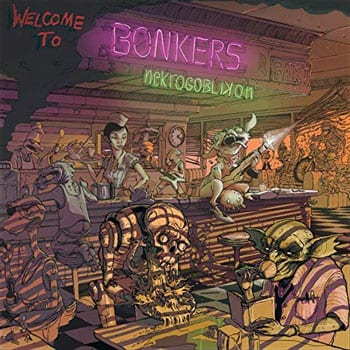 GOBLIN METAL: One of the reasons Dethklok works as well as it does is that Brendan Smalls fully understands that if you’re going to make comedy metal records then the songs have to really stand up so that they last once the joke has worn thin. This is something Nekrogoblikon seems to grasp, though their execution often falls short of their goal, and their fourth full-length—like those that preceded it—is a distinctly hit and miss affair. That isn’t to say that full-blooded converts to the works of the Californian mob will be put off by this, for it is for the most part that which they have come to expect, and it definitely checks all the boxes. Likewise, there are plenty of moments—and occasionally full songs—that hit the mark, and do so compellingly enough that they inspire return listens. “The Many Faces of Hubert Malbec” is the first such example, starting off with the kind of jaunty piano you might expect to soundtrack a chase in an old French comedy, and it has a winning liveliness to it. “Dragons” and “Darkness” also hit the mark, closer “Goblins” the most melodic affair here, and it works well, but a handful of tracks are wholly forgettable, while others are straight-up irritating in their supposed playfulness. All in all, perhaps best experienced drunk. ~ Dan Slessor

THY ANTICHRIST: Wrath of the Beast