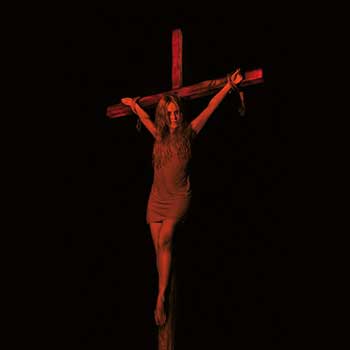 ROCKING METAL OF DOOM: Teutonic and Sverige bell bottom warriors, Lucifer may be a mere four albums deep into its career as rock and rollers hailing from the occult-iest of motor oil stained garages hidden behind the watermill on the cover of Black Sabbath’s debut, but their pedigree is ridiculously rich. Featuring the one-two punch of hard rocking metal power couple Johanna and Nicke Platow-Andersson (The Oath, Entombed, Hellacopters, Death Breath, etc.) is enough to get hirsute pub crawlers opening their ears and wallets. Toss in suburban Stockholm metal superhero Linus Björklund on guitar and axe wizard Martin Nordin on the other guitar and it’s a wonder that Jinx Dawson and Oz Osbourne of Coven fame haven’t come calling with support slot offers on whatever revival tours the sinister rockers have planned for the foreseeable future.

The band’s fourth album—written and recorded during lockdown after they weren’t able to tour in support of III—is the sort of loose and understated doomy, almost boogie proto metal that’s driven by a swinging backbeat and vocal lines that even prim and proper Stepford Wives types will be unable to extract from their humming heads as they toil over homemade meat loaf and try to forget about their college age days of failed seances, alcohol poisoning, and getting down at Lover’s Lane. The four on the floor beatdown on “Crucifix (I Burn for You)” and “Bring Me His Head” are masterful strokes of bluesy note strangling enmeshed with a minor scale swagger and wailing leads that fall somewhere between John Bonham and Ann and Nancy Wilson leading a charge through Cathedral’s The Ethereal Mirror. On the flip side, the more mellow “Mausoleum” is driven by a supple and smooth vocal line such that its chorus might as well be wearing a pointy witch hat and zipping around town on a broom.

“Cold as a Tombstone” slinks along like a sinister blues jam with a riff so insidious and covered in sideburn hair that we suspect Björkman and Nordin may have swapped their souls for it at a nondescript crossroads before Johanna came along and yoinked it, claiming she needed more silkiness to hide the blood curdling evil of her phrasing. This track, much like “Louise,” which has more to do with Mountain’s “Mississippi Queen” than any amount of doom metal, makes for an interesting contrast when stacked up against the likes of album closer “Phobos,” a song that gives country rock tinged doom metal the nefarious edge it’s been lacking.

Ironically, the weakest tracks are the album’s opening pair of “Archangel of Death” and “Wild Hearses,” which aren’t bad songs, they just come across as comparatively lazy and over wrought, respectively. Though the latter makes a brief but brilliant four bar slide into a world of dark pop. Blink and you’ll miss it. Kick yourself if/when you do.

Overall, IV feels like the 60s and 70s coming back to life via a combination of the psychological toying provided by vintage horror movies and the risk in buying kitchen appliances at a thrift store. It’s vintage, somewhat frightening, and cloaked in the air that everything might collapse at any moment. ~ Kevin Stewart-Panko