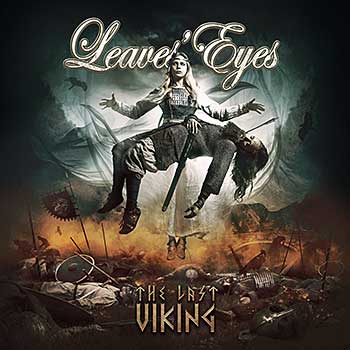 SYMPHONIC METAL: International symphonic metal band Leaves’ Eyes has endured a storied career. From its groundbreaking popularity in the early 2000s, to the well-publicized divorce of husband/wife bandmates Alex Krull (growled vocals, keyboards) and Liv Kristine (lead vocals) a few years ago, to Liv’s replacement with the relatively unknown Finnish powerhouse singer Elina Siirala, Leaves’ Eyes has come out on top with its second post-Liv full-length record and full concept album, The Last Viking. The seeds for The Last Viking were first planted on previous album Sign of the Dragonhead with the track “Waves of Euphoria,” which introduced Norway’s King Harald III, called Hardrada (“the hard ruler”). The concept of the album fits perfectly with the music, as Leaves’ Eyes has always paid great detail to Norse mythology and its sagas and historic adventures.

All the trademark Leaves’ Eyes elements are present on The Last Viking—folk/symphonic influences with a touch of death and black metal, the duality of operatic female/growled male vocals, soaring orchestral compositions, and fantastical lyrics and storytelling. In addition, Leaves’ Eyes has always infused various Mediaeval instruments into their music, such as the nyckelharpa, fiddle, and Celtic horns, and on The Last Viking, it was the character of the song that defined which instruments would fit in with each individual track.

After the cinematic intro of “Death of a King”—complete with heavy orchestration, tribal drum patterns, and Scandinavian chanting—the majestic melodies of “Chain of the Golden Horn” unfolds, which chronicles Hardrada’s dangerous escape from Byzantium and sets the tone of the conceptual storyline. Although the “beauty and the beast” vocal approach gained popularity in the mid 90s, Elina’s soaring operatic vocals mix well with Krull’s death metal growls throughout the entire record. On “Black Butterfly,” which is actually a remake from its 2019 EP of the same name, the band introduces guest vocalist Clementine Delauney of Visions of Atlantis, which gives three sets of dynamic vocals on this track. On some of the other heavier tracks, most notably on “Break into the Sky of Aeon,” the band has a black metal/melodeath metal aesthetic in the vein of Amorphis, Crematory, and Sentenced.

The majestic instrumental “For Victory” and the playful and fun Celtic/Viking vibe of “Varangians” and “Serkland” add a great dynamic to the overall sound and theme of the record, while the 10-plus minute epic album closer and title track is everything you’d want in a Leaves’ Eyes composition—great storytelling, dual vocals, brooding orchestral intro, pounding tribal drums, and heavy tremolo slow burning riffs that ebb and flow so well, giving a dramatic and climactic ending to this cinematic record.

The Last Viking is a long album at over an hour in duration. And if you’re not particularly a fan of female fronted symphonic metal, then it can get rather exhausting in one sitting. However, the album flows splendidly like a movie. As a conceptual album, the length is not a downfall, as it needed to be this expansive to properly tell the story. And since it’s such a varied album that delves from one adventurous journey to another, the excitement level never dissipates. Produced by Krull and guitarist/bassist Thorsten Bauer, the duo achieves a massive, bombastic, cinematic appeal with an epic sound, accompanied by the dramatic cover artwork from Stefan Heilemann.

The Last Viking is a colorful, adventurous. and well-balanced record, which proves to be Leaves’ Eyes’ crowning achievement thus far. ~ Kelley Simms