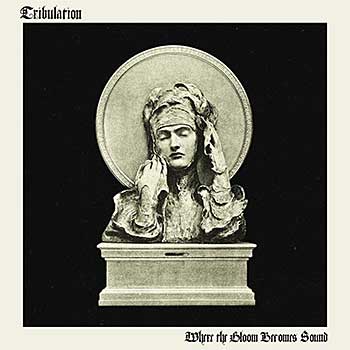 TRIBULATION
Where the Gloom Becomes Sound

DARK DREARY SWEDISH METAL: There are chills in the night, and you are encompassed by a dark and creepy aura, yet you can’t help but draw nearer to it. You all know what this means, right? A new Tribulation album! Where the Gloom Becomes Sound captures the dark and dreary sound we’ve all grown to love from Tribulation, but this album has elements we haven’t heard on previous releases, such as the stark contrast of influences. For example, there are more goth influences and hints of heavier material from their The Formulas of Death days.

The album begins with “In Remembrance,” starting off very slow as spooky synths fill your ears while you anxiously wait for what the band will deliver. An onslaught of guitars then overtakes the song, with vocals following close behind. This is a surprisingly upbeat song (as upbeat as Tribulation can get), but “In Remembrance” still holds a dark atmosphere, which would also make a great opening song in a live set list.

“Hour of the Wolf” is one of the album’s singles, and it’s a haunting song that takes away some of the liveliness we heard on the opening track. It’s a fantastic song and definitely sets the mood for the rest of Where the Gloom Becomes Sound.

Another single, “Leviathans,” sounds less metal out of all of the songs on the album. “Leviathans” has a goth vibe to it, far more than the other songs in the band’s discography and has effects that give it a unique atmosphere that you don’t find elsewhere, making it a great single.

However, not all of the songs on Where the Gloom Becomes Sound standout. “Dirge for a Dying Soul” should feel more powerful, even though it starts off strong. Tribulation goes back to its heavier roots, and opens “Dirge for a Dying Soul” with a melodic Dissection-esque riff. The rest of the song follows that heavy yet melodic tone, but the vocals feel lost in the riffs.

“Elementals” is another song that should be killer. There is a lot going on with this track—some parts are faster and slower, while others are melodic and heavier. While the contrast is interesting, “Elementals” ends up sounding chaotic and very unlike Tribulation. It does get better toward the end, with a beautiful guitar melody taking over the song.

The next song “Inanna,” however, is one of the album’s best with its somber guitar melody. Tribulation conveys so much emotion with a simple guitar riff, and then suddenly, the song explodes with drums and vocals, which eventually settle into the riffing as the song becomes even lovelier. Profound guitar melodies take over the middle part of the song, carrying the listener through a melancholic mood.

The album ends with “The Wilderness,” the perfect combination of Swedish black metal and Tribulation’s signature moody sound. They take all of the perfect aspects of The Children of the Night, and turn it into one song. The song is dark but catchy, and the vocal melodies move you throughout the track and lead you to some of the most amazing guitar riffs heard from Tribulation, making it the perfect way to end the album.

This might not turn out to be your favorite Tribulation album, as a couple of the weaker songs pull Where the Gloom Becomes Sound down in the ranks. There are phenomenal songs on this album, such as “The Wilderness,” and we’re positive all these songs will sound killer live. ~ Stephanie Jensen