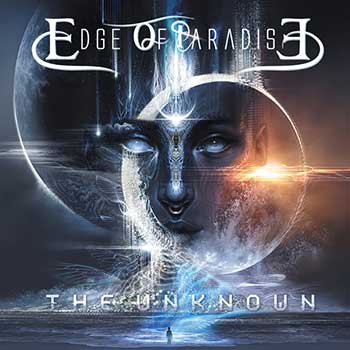 EDGE OF PARADISE
The Unknown

The album kicks off with “Digital Paradise,” a song about exploring afterlife with the help of technology. Decorated with a pulsating rhythm and industrial/electronic elements, the catchy chorus reels the listener in with its pop flavored harmonies, while Monet’s demure vocal pattern—mixed with her higher register—is very infectious. The highly energetic “My Method Your Madness,” with its swirling carnival like keyboard melodies, gives the track a manic and dynamic vibe that fits the lyrics very well. Several of the otherworldly tracks consist of a sci-fi vibe and involve science vs. technology storytelling. Lyrically, much of the album touches upon what our future might look like with technology, such as on “You Touch You Die,” which is about artificial intelligence. One of the heaviest tracks on the album, “False Idols,” also explores the band’s sci-fi concept even further.