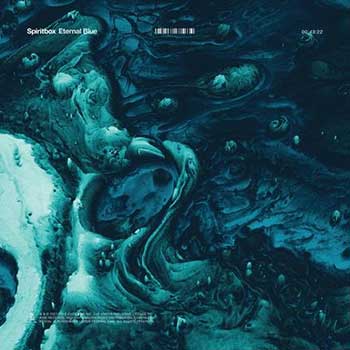 MODERN METAL MASTERPIECE: In what is likely one of the most heavily anticipated metal releases of the fall, Canadian breakout metal act Spiritbox launches its Rise Records label debut with Eternal Blue. Spiritbox has been making waves in the progressive metal scene since the release of their self-titled EP in 2017, attracting a devoted fan base that has continued to grow exponentially, driven mostly by word of mouth and the band’s raw talent and musicianship.

Sidelined by COVID during their first major international tour, the band released three new singles they recorded over the course of 2020, “Blessed Be,” “Holy Roller,” and “Constance.” SiriusXM’s Liquid Metal picked up on “Holy Roller” and played the hell out of it, with the track becoming the station’s highest charting song of 2020. And while this might’ve helped a little, the band was already blowing up organically—with the new tracks getting millions of streams. Despite the pressures of having to follow these early successes, Spiritbox has definitely risen to the occasion. Eternal Blue is nothing short of a masterpiece of modern metal.

Along with “Holy Roller” and “Constance,” the recent singles, “Circle with Me,” “Secret Garden,” and “Hurt You,” are good representations of the range of sounds on the record. Spiritbox elevates the djent movement in progressive metal, infusing it with glorious nu metal elements and breathing fresh life into what can sometimes feel like a stale subgenre. While there are five tracks out ahead of the record’s release, there’s still plenty left to love on the album that fans have not heard yet. Further, the band has arranged everything so that it all flows from song to song perfectly. Even if you’ve listened to one of these tracks a dozen times over, hearing that song in the context of the full record is very satisfying.

Album opener “Sun Killer,” for instance, is an absolute monster of a song that sees a dynamic performance from vocalist Courtney LaPlante, who is singing beautiful clean melodies one moment, only to whisper the refrain, “Sun killer, sing me to sleep!” another moment, before screaming it at the top of her lungs. The band expertly melds synthesizer samples with guitarist Mike Stringer’s riffage on this and many other tracks on the album, creating a compelling soundscape that is more than just a wall of rhythmic, palm muted guitar chugs syncopated with bass guitar and drums.

The third track, “Yellowjacket,” is another huge sounding song on the album and features Architects frontman Sam Carter—though calling it a feature is almost disingenuous as Carter joins in just beyond a minute into the track and is there through the end. The song begins with LaPlante speaking over a synthesizer sample before kicking into brutal low gutturals over a dissonant nu metal sounding riff. Carter comes in heavy before layering his vocal melodies over LaPlante in the chorus. The interplay continues in the next verse with both vocalists together and sees a crushingly heavy breakdown with Carter growling, “OH!” It’s enough to make you want to mosh around your cubicle and put your coworker in a headlock.

There are some lighter tracks, too. “The Summit” sees a beautiful vocal performance from LaPlante at the upper end of her clean vocal range, her voice soaring over a bouncy meandering riff from Stringer as she sings, “The venom is what keeps me alive.” Another more melodic offering comes with, “We Live in a Strange World,” which has synth that is reminiscent of something you’d hear in a Now, Now song along with more soaring vocals shimmering above. Of all the melodic numbers on the album, the title track showcases the softer side of Spiritbox best. Stringer weaves a beautiful tapestry of sound with his guitar parts on this one, complimented by LaPlante’s vocal delivery as she laments, “I wish my blood would slow down…”

Prior to the close of the album that ends with familiar track “Constance,” is the magnificent number “Halcyon,” which on its own encompasses the variety of dynamics on the record. Starting melodious and airy, things take a turn for the heavy and dissonant about two minutes in and come down like a ton of bricks around the three minute mark.

Eternal Blue is an absolute thrill ride from start to finish. The songwriting and musicianship are well beyond what most bands would produce for their first full-length. One can only wait with great anticipation to see how Spiritbox continues to evolve and grow. ~ Nathan Katsiaficas