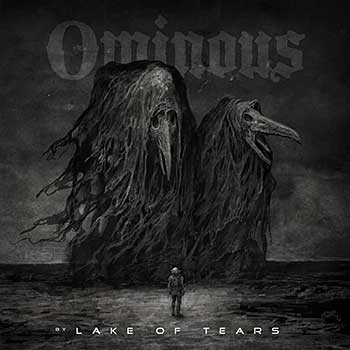 A MIXED BAG: The story of heavy metal has been full of bands whose careers progressed to places they probably never even considered when they were just starting out. Bands like Anathema and Katatonia sound very different now compared to their black and death metal roots, and so too goes the story of Sweden’s Lake of Tears and their latest album, Ominous.

To be fair, this band never really stood musically still for too long, with only their first two releases, Greater Art and Headstones driving home that nostalgic gothic rock/metal style à la a Sentenced or Tiamat. However, just like Tiamat, Lake of Tears embraced other influences as their career continued on, from progressive rock and electronic music to spacey, out there psychedelia.

Ominous definitely showcases those influences more than any sort of retro head trip, and the album is pleasantly challenging in its refusal to be labeled or pigeonholed. Sure, quick comparisons could perhaps be made to the melodic side of bands like Green Carnation or …In the Woods, but Lake of Tears might take even more creative chances than those two bands, albeit with mixed results.

That is to say, Ominous is an album worthy of respect, even if it doesn’t always work. “In Wait and In Worries” follows a relatively traditional opener with a slow build that swirls behind the clean vocals of mainman Daniel Brennare. This vibe continues on “Lost in a Moment,” coming across as a gothic Tool perhaps, but the mood is still fairly sluggish and lethargic. Ominous just sort of sounds like a car engine that never quite turns over. There’s definitely atmosphere, but even the heavier title track sounds a bit halfhearted, like Brennare is more interested in crafting soundscapes than rocking out.

And fair play to him, because there are moments here that do work, especially if you passively listen to this and drift off with some of the Floyd-ian arrangements Lake of Tears utilize along the way, but fans might be hard pressed to set up Ominous against better albums by the band, such as A Crimson Cosmos, Black Brick Road or, yes, those first two albums. Lake of Tears diehards might be pleased with Ominous, but newbies are advised to start elsewhere with the band’s discography. ~ George Pacheco