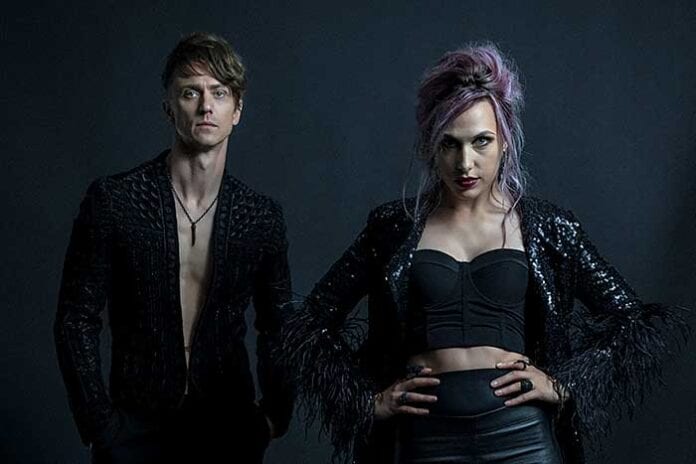 Icon For Hire—composed of singer Ariel Bloomer and guitarist Shawn Jump—has quietly amassed a legion of followers. With 10s of millions of streams and over 600,000 followers across social platforms, Icon For Hire is the sleeping giant of the modern rock scene, and are now ready to step into the forefront with the band’s new album Amorphous out February 19th.

AMORPHOUS TRACK BY TRACK ACCORDING TO THE BAND

“Brittle (Prelude)”
This track is an instrumental warm up to the album, featuring production by David Thulin…it’s meant to set the tone and hint at what’s to come.

“Brittle”
“Brittle” is one of our personal favorites on this album, because it has so many elements that we love to play with-the intimate vocals, vulnerable lyrics, a soaring chorus, and pop production sprinkled throughout. It’s an emotional start to the album.

“Curse or Cure”
One of the heavier songs on the record, this track features a big breakdown and lots of angsty, self-reflective lyrics, which like to do we do a lot of! Shawn, our guitarist started writing the music while on tour in Europe, days before the pandemic sent us home to Nashville.

“Enemies”
This was a fun one! We both collaborated on the lyrics, which was different for us. We were able to play around with adding some creepy musical elements to go with the disturbing lyrical theme, and Ariel’s niece joined us in the studio to help lend some vocals.

“Panic Attacks”
“Panic Attacks” is one of the most personal songs on the album, and tells the story of Ariel’s personal battle with anxiety. In the song, she’s going back and forth as the voice of her inner child, and her grown up self trying to ignore that inner voice. This is the most hip hop forward track on Amorphous, and we want to do more of this on future projects.

“Seeds”
We love how this song tells our story of being an underground band and surviving, all due to our amazing fanbase. It’s a celebration of this world we’ve all built together, and we wrote it as a thank you to our fans, the Icon Army.

“Thirteen (Interlude)”
This song is just an iPhone voice memo of Ariel singing in a room with her piano. We didn’t even try to finish it out, we just left it at that basic idea. It’d be cool to re-approach it in the future and turn it into a full song one day.

“Background Sad”
The song explores the struggle of having been working on yourself for a long time, and wondering if you’re getting anywhere at all. The lyrics are asking, “Am I always gonna just be background sad?” That’s something we’ve wondered a lot, as we try to encourage our audience to hold on and stay strong, but sometimes hopelessness overtakes us anyway.

“Last One Standing”
This is the first song we did with our producer, and we consider it like a quintessential Icon For Hire song. We did most of it in one day, and there was that magical feeling where it all came together perfectly. We love the anthemic, empowering lyrics with the larger than life musical elements. We think this song represents the album really well.

“Waste My Hate”
A total wild card for us! We did more of an old school rock and roll vibe, with even some blues influences, and we didn’t know if our fans would dig it. Luckily, they love it! It was fun to express a more lighthearted, sassy side, since usually our songs are pretty serious! The guitar solo right in the middle was pretty fun to do too.

“Impossible and Obstacles (Interlude)“
We’d been wanting to do some more rap stuff on this album and Ariel tracked this in just one or two takes. There’s no editing or vocal comping, we just went for it one late night in the studio and liked how it came out.

“Sticks and Stones”
Shawn created the musical bed of this song over two years ago, making it one of the first songs written for the record. Lyrically, it’s a feminist punch in the face.

”Warrior”
“Warrior” is meant to make you feel unstoppable and help you take a moment to celebrate how far you’ve come. We worked on it with lots of different producers, making it bigger every time. We are so proud of how this song turned out!

“Only Be a Story”
As soon as we demoed this out, we knew it would make a great closing track to the record. It’s pretty much a rock ballad, and it wrestles with questions surrounding our own mortality. The hook line of the song came from a conversation Ariel was having with a friend, after which she immediately went to the piano and captured the song.