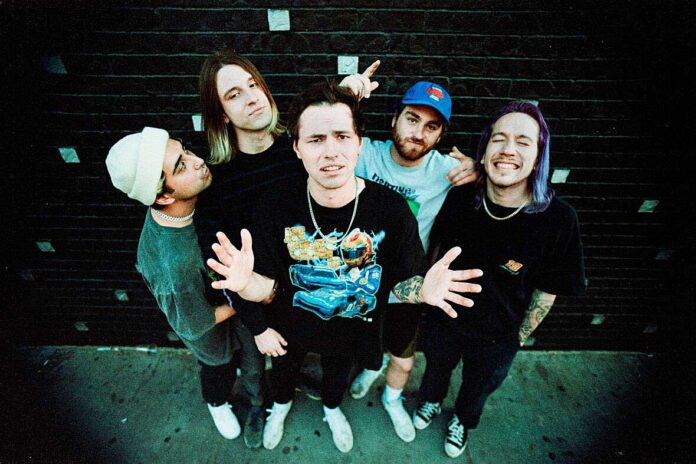 “What a trip that this record is finally here. This is a culmination of everyone’s hard work, hardship, ups and downs, lefts and rights, and everything in between over the last couple years,” says lead vocalist  Benny Scholl. “When we started making this record, I don’t think any of us knew what we were signing up for. I think we went through like 30 or 40 demos and starting points of songs to get to the 10 that made the album. We didn’t settle until we got exactly what we wanted out of this sound, and I’m so proud of that. I hope this record can mean something to you like it does to me!”

Vocalist Benny Scholl and drummer Paul Jaton tell us the tracks that have influenced AVOID and the essential songs of their band to hear.

I find myself going to this song for inspiration a lot. Not even just for Cult Mentality, (which I did), but in older stuff and still with newer stuff we’re working on. There’s so much energy in this song, and it takes you on a ride. It’s technical yet still really catchy, and you never know what’s coming next. It always puts a smile on my face. – Benny

I remember this song coming out when we were living in Los Angeles for the summer of 2021, working on what ended up becoming Cult Mentality. I always try to listen to new music every week when it comes out, and I remember driving the van in downtown LA, going to the store or something, and this song came on and it really blew my mind the first time. It made me so excited for the future of rock and the scene in general. Seeing a band that is so well respected that comes from playing VFW halls and skate shops to doing something so accessible reminded me that the possibilities are endless with music. – Benny

The Armed: “An Iteration”

I forget exactly when I found The Armed, but I remember it was when we were living in our band house at the beginning of 2021. We found this music video, and it took a second to kick in, so I was getting a little bored (no disrespect, I personally like it when music videos hit right away), and when the song did eventually kick in, it was so good I didn’t care about the video taking a second or anything. I was watching with our guitar player Nick (Olson), and it blew our minds in the same way and we were both jaw dropped excited and so stoked. I feel like it inspired us to write something that night, honestly. It was such a refreshing sound and was another thing I could always turn to to get the gears flowing. It was a song I remember always being on the playlist while we were working on the album, too. Definitely a huge inspiration. – Benny

Bring Me The Horizon: “Teardrops”

You really can’t deny how incredible Bring Me the Horizon’s latest albums and singles have been. They continue to top themselves and that is the truest inspiration! “Teardrops” is such a cool song, the production elements really drive the hook/chorus, with that synth hitting you in the face from the first note. We definitely have taken some notes from Bring Me the Horizon with the whole of Cult Mentality. They are probably to no surprise, one of our favorite bands, so we take a lot of inspiration from them and especially this album. – Paul

First off, this song fucking rips. Ocean Grove is a band that has inspired us since the beginning! This song and particular album was in constant rotation amongst all of us during our recording process. I really think Ocean Grove is a band pushing the boundaries of rock and metal music. They just have such massive hooks with the coolest drum parts on earth. Music that is both obscenely catchy and also as technical and groovy as Ocean Grove serves as such a big inspiration for us. – Paul

I fucking love “Cowabunga.” I can’t say enough good things about this song. We came up for the initial idea when we were actually in a pretty rough spot in making the album. We weren’t getting songs we absolutely loved yet and knew we needed better. I was sitting down with one of our producers KJ Strock, and we came up with the bare bones of the first idea for this song. I even still have the voice note of that moment! Right then was the first time in a long time I knew we had something, and that was an incredible feeling. We immediately went downstairs with Nick, Paul, and Chris and worked out our first real demo of this song and I remember falling asleep listening to the shitty demo that night being so stoked we got this song. That was the first time this whole record process that I’d done that, and it was when I knew we were onto something good. – Benny

This song is constantly in the running for my favorite on the whole album. This was another song that birthed from a demo we did with KJ. We had this very sporadic idea that we knew we liked, but didn’t know what to do with it. One night when we were working with our producer Hiram Hernandez (who produced, tracked, and mixed the record), Nick and I started singing the vocal melody from that demo and he loved it, so we pulled that song back up and took a few riffs from it and that is what blossomed into “Blast Off!!.” It was fun to also finally get a 420 friendly song on an album. We did a lot of fun dumb little things on this one, from the Metallica reference in the first verse to the skit before the breakdown. It always makes me smile.  – Benny

I mean, did you hear the breakdown? But in all seriousness, this is a fun and a very brutally honest one. The lyrics talk about being burnt out and just in general being over it, which is where we were in the album process when we did this one. I remember it being 4am and I had barely slept the last couple weeks. I was so done, and they wanted me to track this. I tell you what, I put every ounce of being burnt out and over it into that tracking session. Especially being able to look back on it, it’s really cool to hear that raw emotion on the album and it truly makes that song for me. – Benny

I know that “Whatever” was a song we were all really excited about from the start. It all started from a demo riff from our good friend Ethan Schmidt. Then after some more writing with our producers Hiram and K.J., we arrived at what we have today. It’s a pure in-your-face song with the highest possible energy level. “Whatever” shows how we love to have fun, but that we also want our music to hit you in the heart. – Paul

This is my personal favorite from the record. It felt really refreshing to make this song, and it was actually written on Christmas. If you’re looking for a sing-along from this album, this is your pick. We went really light with this one, and there is actually no screaming. So, a little departure from normal, but I feel it gives a good representation of where we’re headed as a band. – Paul

12 MUST-HAVE SONGS FOR YOUR QUARANTINE PLAYLIST