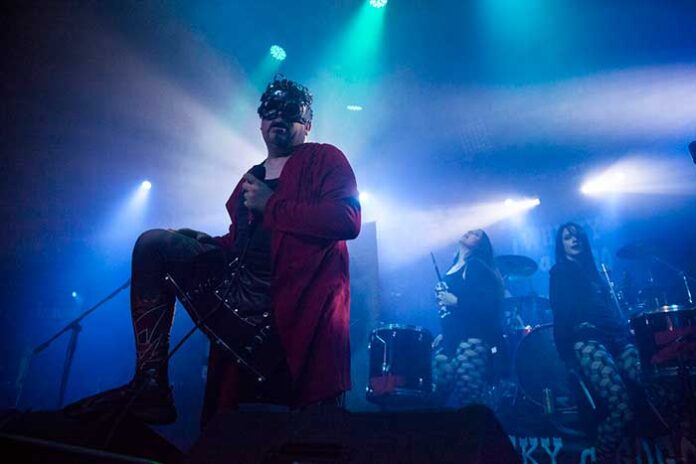 For his birthday this year, Skum Love asked the You Rock Foundation to host his birthday show at the Whisky A Go Go on Sunday, August 29, 2021, hosted by Jes Fama, with special guests The Mendenhall Experiment, Fate DeStroyed, and Symbolism.

The You Rock Foundation is non-profit organization that helps people who suffer with mental health issues, such as depression, anxiety, and suicide ideation. They offer various resources to help people who are struggling, as well as bring these issues into the national spotlight and break the stigma through documentaries, interviews, and with musicians who are suffering as well. They can be found at YouRockFoundation.org.

The evening began with a panel hosted by Dr. Jennifer Palladino. The first to speak was Skum Love. He shared his experiences growing up that led to his anxiety, depression, and self-doubt, which have only worsened by the loss of 30 friends over the last 18 months. After his moving testimonial, he made it very clear that even if you think you have no one, you will always have him. Even if he doesn’t know you, if you contact him, if you need help, he will talk to you.

The second to address the audience was the subject of the documentary Mind Over Matter, Brandon Mendenhall, the guitarist from The Mendenhall Experiment. Brandon was born with Cerebral Palsy, and as a result of being told that he will never be able to do anything repeated throughout his life, he developed depression and anxiety. Thankfully, he did not listen to these people, and after his grandmother loaned him money for his first guitar, he became an immensely talented guitar player that commands any stage he plays on. The message he wants people to hear is simple, “Open your mouth. Talk to someone. Seek out therapy. Be open to medication.”

Next to speak was Devix, the lead singer of Symbolism. Devix suffers from anxiety and fits of depression, which only grew worse when his leg became temporarily paralyzed. He found himself homeless and forced to live in his recording studio in Los Angeles, sharing that it was Symbolism that saved his life last year. He also credited Paul Barker of Ministry with saving his life when he was 19, and then again by Martin Landau when he was 26.

Last on the panel was Franccesca De Struct, the lead singer of Fate DeStroyed. Franccesca used to engaged in a lot of unhealthy activities such as drug use and self-harm because she felt ashamed, wouldn’t reach out to anyone, and felt that she had no other coping mechanisms for her bipolar disorder. She has been sober for four years, has been seeing a therapist weekly for almost two years now, and is on a regimen of doctor prescribed medication. Franccesca does not believe that therapy and medication is anything to be ashamed of and that going to a therapist should be as common and casual as going to the dentist. She wants everyone to seek help when they need it, whether it is through therapy apps or medication. She understands that everyone has days when the anxiety is so bad that everything is too overwhelming and that you just have to sit in the dark alone. Everyone struggles, we just need to do something about it.

The first band of the night was The Mendenhall Experiment, armed with a new vocalist, a powerhouse of a woman, Alyce Hayes. Throughout their 10 song set—“Breaking Out,” “Stronger Together,” “Pulse of the Last,” “Prosthetic,” “Nothing Good,” “Carry On,” “This Ride,” “Bury the Casket,” “Say It,” and “Seize”—it was reminiscent of the female led metal bands of the 90s that many of us grew up listening to and it still resonates in our soul 20 years later. The Mendenhall Experiment’s emotive, heart pounding metal enveloped the entire audience from their first masterful note to their very last.

Second to perform was Fate DeStroyed with a nine song set—“Art of Betrayal,” “Rather See You Dead,” “Speak Your Name,” “Crave,” “The Need That We Kill For,” “Death Signs,” “Helena,” and “Here It Lies.” The Harley Quinn-esque lead singer Franccesca De Struct’s ability to seamlessly transition from screamer metal to melodic harmonies is truly impressive. What makes this band stand out is not just their vocalist, but also the raw and incomparable talent of the band as whole. Their mix of modem and industrial metal with female vocals is truly unique.

The main attraction of the night, the birthday boy Skum Love, is a monument to showmanship, charisma, and talent. His 10 song set—“Devil May Sing,” “Welcome to My Hell,” “My Machine,” “Loaded,” “The Dark,” “Filthy,” “Anti-American Idol,” “Dig You Like a Grave,” “New Perversion,” and “I Am Your God”—opened with cloaked musicians and dancers as smoke quickly filled the room. Within seconds of the dark metal rock hitting your ears, it was obvious that Skum Love was about to give us an extraordinary experience. Skum Love created an entire universe on the Whisky’s stage. The lights, smoke, costumes, props, and dancers provided a backdrop for Skum Love to transport the audience out of their bodies and minds and into a realm where nothing but this single performance matters. Before the last song, Skum Love’s friends and the audience paid tribute by singing to him for his birthday.

Immediately after, Skum Love pulled two of his friends on stage and married them in a quick ceremony shortly before the smoke detectors went off. Even with the blaring alarms, Skum Love played his last song without skipping a beat.

Symbolizm closed out the night with a seven song set—“Voyagers,” “Iced Out,” “Seizures or Words,” “With a Razor,” “Faded Wasted,” “Rile On,” and “Figurative Theatre.” The lead singer, Devix, donned Joker-like makeup as they serenaded us with what can only be described as a mesmerizing combination of heavy metal and classic rock. These veterans of the stage took the alarm shenanigans of the previous set in stride and performed as if nothing had happened, like the true masters that they are. Symbolizm filled the venue with dark, melodic, and aggressive yet welcomed tones to give the perfect ending to an unforgettable evening.