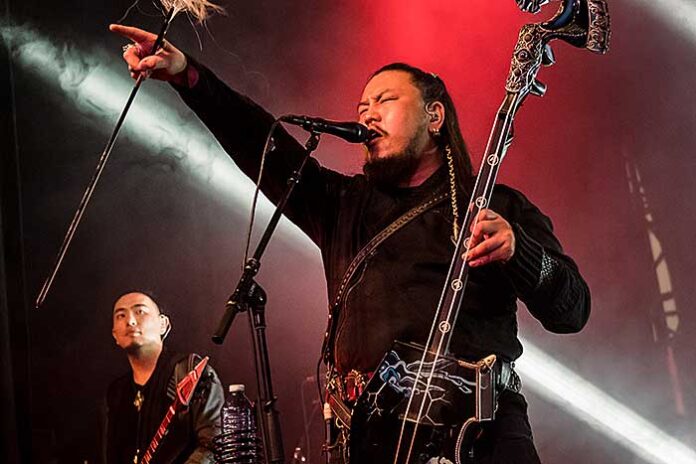 Halloween night! Most people opt to go to a costume party or bar hop. For me, though, I have done Halloween concerts for the past decade, if not longer. No expectation to drink or participate in silly costume contests; it’s just having fun. This year, the show I chose was none other than the Mongolian folk rock and heavy metal band, The Hu. If you are unfamiliar, you are in for a treat!

The evening would be spent at the beautiful and classic El Rey Theatre in Los Angeles. Parking is a pain with the neighborhoods around the venue, but get there early and have some dinner at Chipotle or another neighboring chain, and you’ll be fine. The line wrapped down the block, and some patrons were in costume and makeup, others just in regular street clothes. As we entered the venue to the sold out show, it quickly became apparent how crowded this show would be. We were packed in like sardines, standing over the lines that the venue requires you to stand within to keep fire lanes clear, but there was no avoiding it tonight. Front to back, this show was packed, and it was an incredibly diverse crowd.

Opening for The Hu was The Haunt, an alt pop rock, sibling fronted band from Florida, comprised of Anastasia Haunt (lead singer), Maxamillion Haunt (guitarist, singer, and producer), Nick Lewert (drummer and producer), and bassist Nat Smallish. Formally known as AnastasiaMax, the foursome took to the stage and caught the attention of every person in El Rey. The Haunt is extremely energetic, constantly moving around the low-lit stage. I am super excited to see this band touring more and more and picking up steam while playing scorching performances. The Haunt is a 10 out of 10 band for your radar, especially if you have an opportunity to catch them live.

I didn’t think it could happen, but somehow the venue was more packed, as the crowd chanted “Hu! Hu!” I’m eager to get into our tiny little photo pit that has no room to move around, but it’s less packed than the crowd behind the barricade. Lights dim and then a bright flash as The Hu came out with their classic opening track to get the crowd pumped, ‘Shoog Shoog.’ Fists were pumping in the air with each Shoog that was spoken, the powerful and distinctive sound of the Morin Khuur (horsehead fiddle) along with earthshaking bass and drums. Frontman Gala doesn’t shy from the crowds chanting and cheering, encouraging the crowd to be louder.

The band plays a breed of metal like you have not heard before. The incorporations of native instruments such as the flute and jaw harp add a flavor that would be hard to replicate successfully. The variations of metal and folk music with traditional throat singing are alien to most but welcomed. None of the songs are in English, but if you research the translations of their songs, you’ll find stories of their culture and some heartwarming tales. Their live show is nothing short of extraordinary. They are a band that proves time and time again that they aren’t a mere novelty act, and that music transcends all barriers and unites people from all sorts of backgrounds and cultures.

Since the release of their first album in 2019, the band has rereleased “Yuve Yuve Yu” featuring vocals by Danny Case of From Ashes to New, has been featured in videos games, has teamed up with Jacoby Shaddix (Papa Roach), released a remix featuring Lzzy Hale (Halestorm), and were selected to participate on Metallica’s 30th anniversary album. I look forward to finding out what comes next for The Hu. One thing we do know, the next chapter includes a new album that was recorded over the quarantine. The album is expected for early 2022 via Better Noise Music, and we are excited as can be!