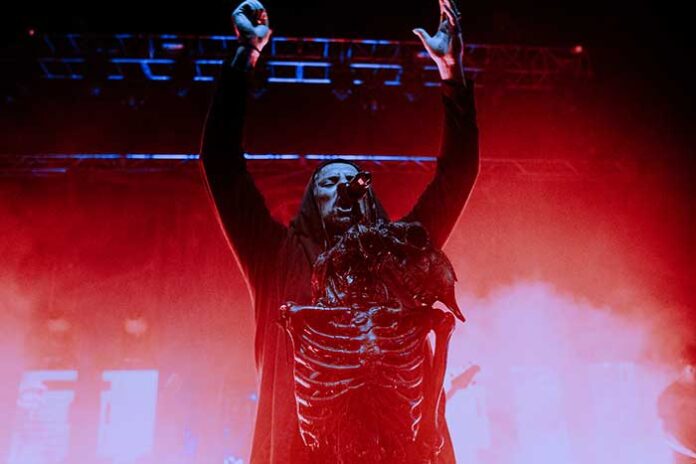 AFTER THE BURIAL and THY ART IS MURDER
with Brand of Sacrifice and Currents
Worcester, MA
The Palladium
05.28.22

Memorial Day weekend began on a heavy note, as the Back from the Gulag Tour featuring Brand of Sacrifice, Currents, Thy Art is Murder, and After the Burial made its way to The Palladium in Worcester, Massachusetts. The venue was packed only shortly after doors opened, as fans were eager for this stacked metal lineup.

The night opened with none other than the Pokémon theme song, which we all hold dearly in our hearts and one that every person in the venue sang along with so passionately. This was already an incredible start to the evening. As the song ended, out came Toronto, Canada’s Brand of Sacrifice. Dallas Bricker (bass), Liam Beeson (guitar), Rob Zalischi (drums), and Kyle Anderson (vocals) jumped into their performance with a brutal intensity. The heaviness of the music mixed with the ominous purple lights blended perfectly for the band’s energy. The synchronized movements between Bricker and Beerson were seamless, while Anderson’s vocals were so powerful, they genuinely controlled the entire audience. Brand of Sacrifice was supporting its 2021 release Lifeblood and closed with “Eclipse” off of the 2018 EP The Interstice. Though the crowd was enticed by Brand of Sacrifice’s performance, they were gearing up for hometown favorite Currents.

Currents’ home of Connecticut, though right next door, was not a stop on the tour, so this evening was considered as their home show and their fans absolutely did not disappoint. Matt Young (drums), Christian Pulgarian (bass), Ryan Castaldi (guitar), Chris Wiseman (guitar), and Brian Wille (vocals) took to the stage, and the crowd went wild with excitement. Pulgarian brought tremendous energy as he ran, jumped, and spun all over the stage and even climbed and played on top of a speaker. Wiseman, calm in demeanor, played every note as if it was like breathing to him. The mosh pit during Currents’ entire set over took the crowd with exceptional intensity. They played fan favorites such as “Poverty of Self”off of the 2020 album The Way It Ends and “Into Despair”off of the 2018 album I Let The Devil In. As their set came to a close and the stage was changing over, Wille took the time to step down from the stage and speak with individual fans in the crowd. Truly a remarkable moment to show how not only talented but humble this vocalist is.

The crowd was getting amped up as the stage was being set for Thy Art Is Murder. Their backdrop contained upside down crosses and a pentagram, as well as the all seeing eye. The drums were set on a platform with screens lining either side. What really pulled the entire look together was the mic stand that was built with melted skeletons layered over one another. There was an apocalyptic feel to the stage, which made Thy Art Is Murder’s preview music of “We Like to Party” by the Vengaboys that much more entertaining.

Far from their home of Australia, Thy Art Is Murder stepped onto the stage and the real party began. Jesse Beahler(drums), Kevin Butler (bass,) Sean Delander (guitar), Andy Marsh (guitar), and CJ McMahon (vocals) had the crowd going wild as they opened with “Death Squad Anthem”from their 2019 release Human Target. The fast paced heaviness of the music was impressive due to Beahler’s drumming as it looked like he was running through out the entire set. McMahon managed to cover the entire stage song after song. There was not a single moment he was not in motion or interacting with the crowd. The intense red lighting helped portray the darkness of the music. McMahon even explained that many of the songs were in relation to his 10 years of drug abuse to which he can now celebrate his successful sobriety.

Thy Art Is Murder was supporting their 2019 album Human Target, but also played a mix of songs from all of their past albums such as “The Son of Misery”(Dear Desolation, 2017), “Holy War”(Holy War, 2015), and “The Purest Strain of Hate” (Hate, 2013). McMahon even jumped into the crowd for what seemed to be their last song of the night. As Thy Art Is Murder left the stage, fans begged them to come back and keep playing. The pleas of the venue quickly persuaded the band as they ran back to the stage to play an encore of “Puppet Master” and the song that put them on top “Reign of Darkness.”

Last, but definitely not least was After the Burial. The Minnesota natives sprung right into their set, opening with “Collapse” from their 2016 album Dig Deep. Dan Carle (drums), Adrian Oropeza (bass), Trent Hafdahl (guitar), and Anthony Notarmaso (vocals) were supporting their 2019 release Evergreen playing songs such as “Exist, Exist,” “Behold the Crown,” and “Quicksand.” They even featured a few songs from their past albums “Laurentian Ghosts” (Dig Deep, 2016) and “A Wolf Amongst Ravens” (Wolves Within, 2013). Though they did not play any songs from 2010’s In Dreams, the blue and green lighting perfectly represented the band’s album cover.

Fans crowd surfed to the front of the stage, screaming their hearts out and giving every ounce of energy they had left for the evening. The Back from the Gulag Tour had an incredible lineup, which led to an amazing evening and an extraordinarily successful tour for the musicians as well as the fans.