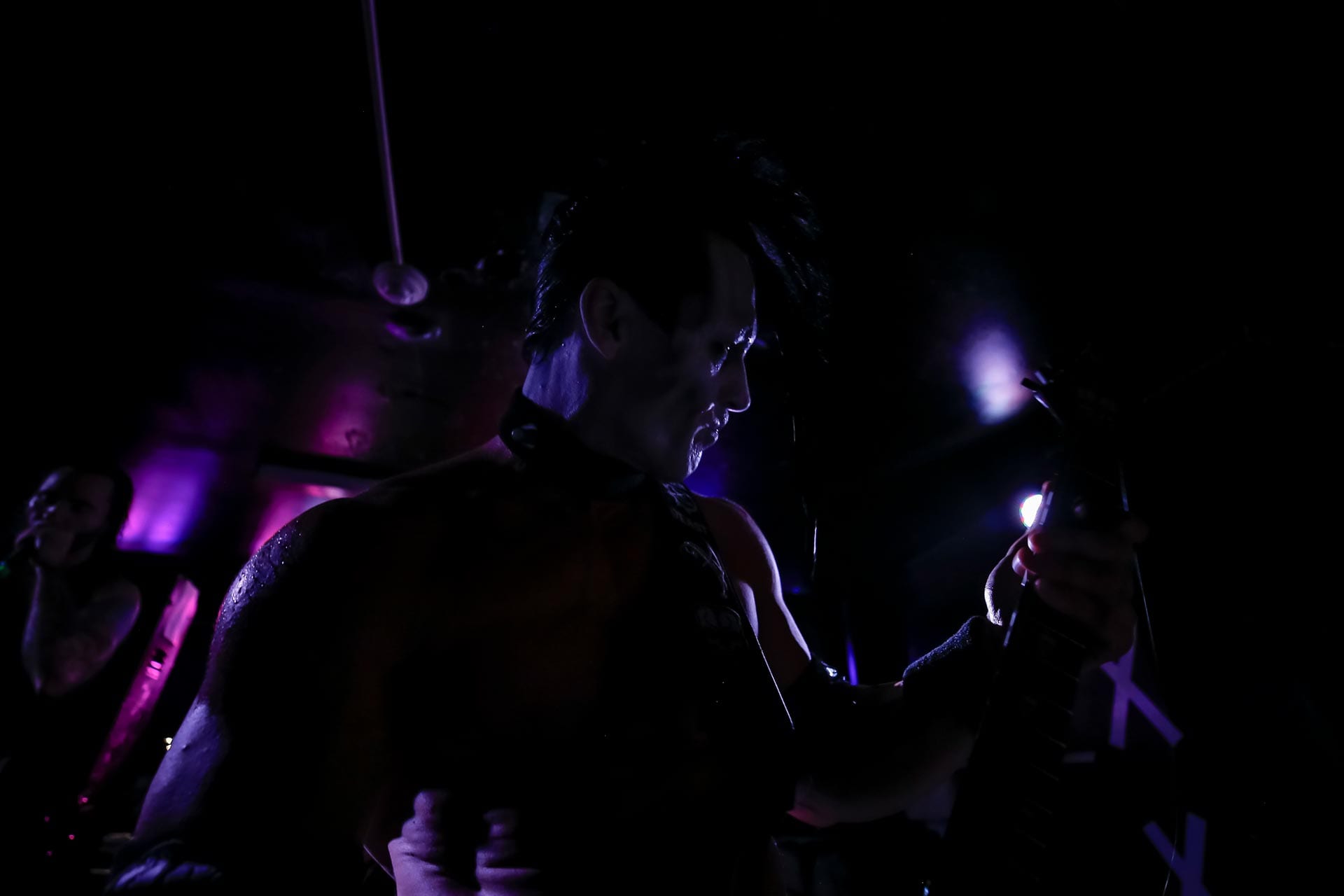 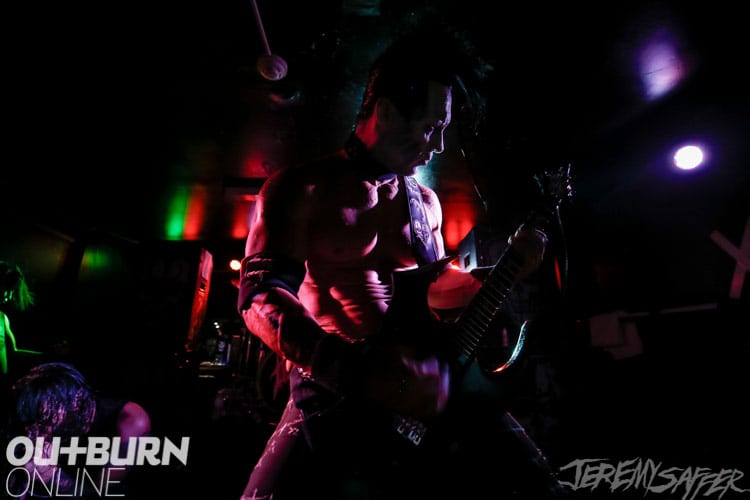 Photos and Words by Jeremy Saffer

It’s always fun to see an amazing horror or superhero movie the day it hits theaters. You get that jolt of excitement and energy when your favorite villain or hero hits the screen, which is exactly what one feels when seeing the man, the myth, the legend…the monster that is Doyle Wolfgang Von Frankenstein hit the stage, especially when it’s the first date of a 12 week tour.

While Doyle himself is very well known, the band Doyle is full of incredible musicians—Alex “Wolfman” Story of Cancerslug fame on vocals, Wade Murff on drums, Brandon Strate on bass, and, of course, Doyle Wolfgang Von Frankenstein on guitar. 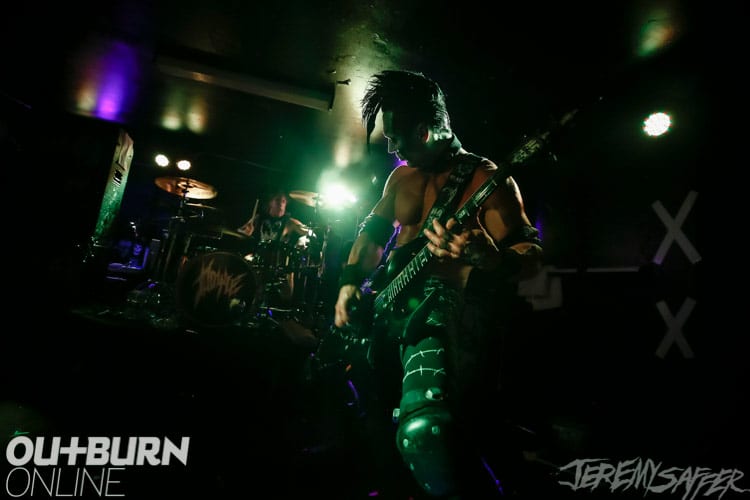 The band has a unique energy. Alex is a madman on stage, while Doyle does what Doyle does best, stomping around, beating the riffs out of his signature handmade Abominator guitar, and blowing large pink bubbles of gum.

This show was in the upstairs part of The Webster Theater, which is a bit smaller, but it was packed front to back with people awaiting the arrival of Doyle, and for the set to kick off. Anytime you get the opportunity to witness Doyle, the minute he descends upon the stage, like Godzilla coming onto land, one knows that everything is about to be destroyed (in the best way possible) from the rush of energy when he first walks on stage and starts beating riffs on the Abominator. 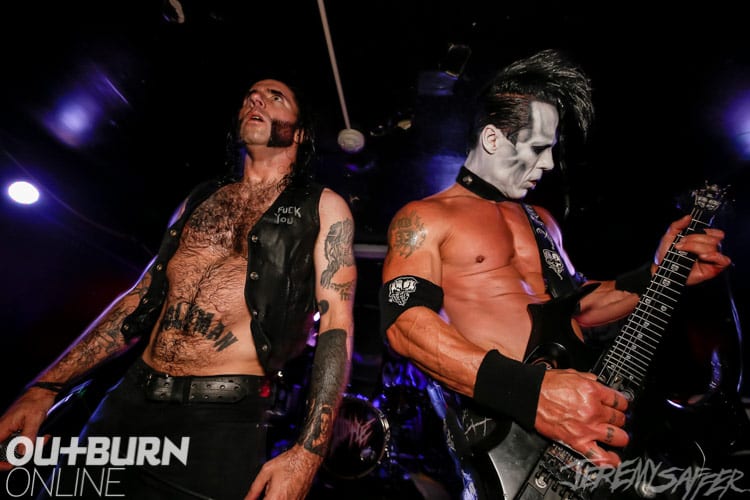 The band kicked it off heavy with “Abominator” and never let up. Those witnessing the band for the first time are in awe for a few songs, seeing Alex tear apart the stage like a Tasmanian devil, Brandon headbanging through entire songs, and Wade smashing the drums. Doyle doesn’t exactly play his guitar—he hammers riffs as heavy as his stomps out of it. This is no punk rock show, this is metal! After a quick guitar change, they followed up with “Beast Like Me” from the second album, equally heavy, with more energy and movement from the band. 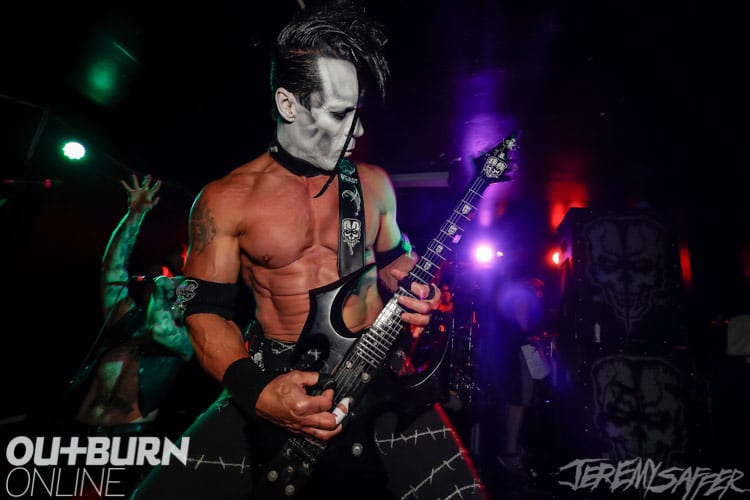 Between songs, Alex proclaims, “This next song is kind of a love song. You can dance to it if you want to,” as Doyle pops a bubble and they go into “Head Hunter,” while the fans start pulling out their phones trying to capture the insanity that’s happening in front of them. 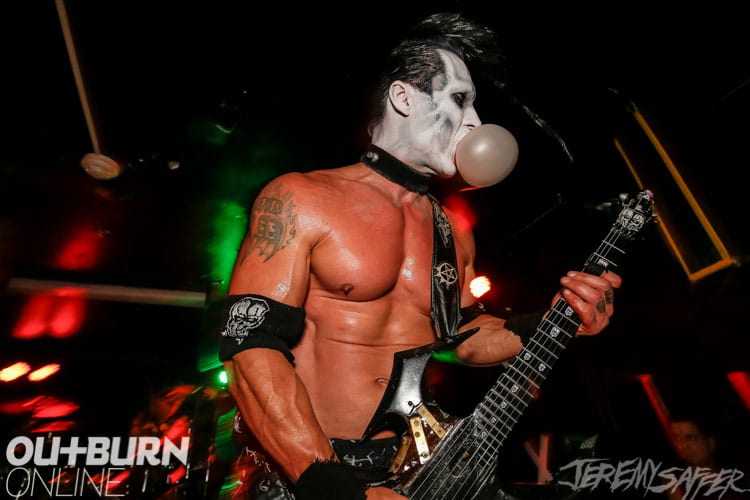 Alex again proclaims, “This next song is a love song. You can dance to it,” as they go into “Valley of the Shadows,” with the crowd singing along, a fan favorite from the first record. 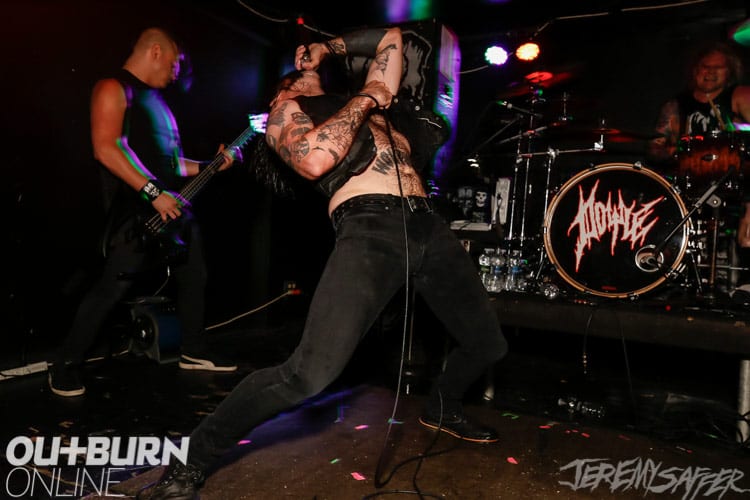 Next up, Alex again says, “This next song is kind of a love song. You can dance to it if you want to,” while those who have seen the band live know this is a show standard, others who haven’t are a bit confused as the band starts up “Darkside” into “Witchcraft” from the new album, giving a good mix in the set between the two records. 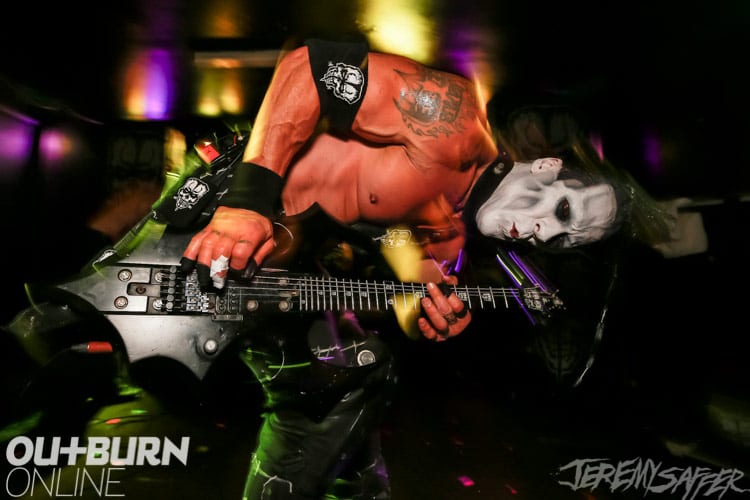 As one might imagine, the next thing everyone hears is, “This song is actually kind of a love song. You can dance to it if you want to. I’ll be dancing all night,” as they slow things down a bit for “Dreaming Dead Girls” and “Cemetery Sexxx,” both of which were huge sing-alongs with the crowd. Though the pace of the songs isn’t quite as thrashy as the others in the set, they are still heavy and set off the first pit of the night. 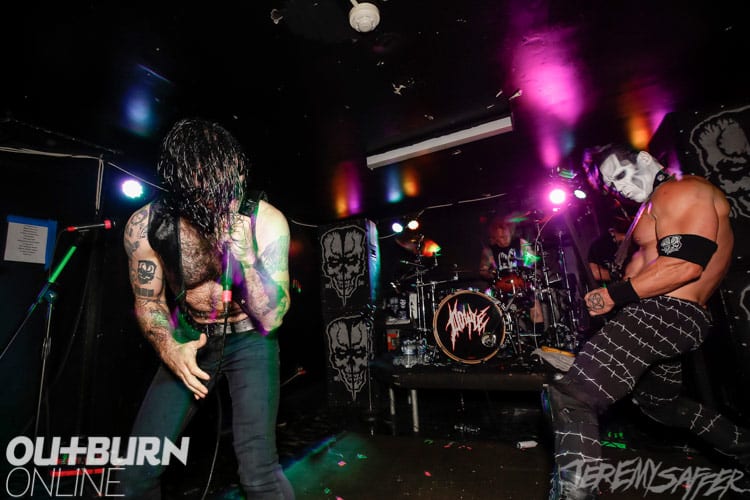 “This next song is kind of a love song. You can dance to it,” as the crowd now fully understands and gives a little laugh, while “We Belong Dead” amps up the energy even more in both the band and the crowd, and then “Mark of the Beast,” which being one of the heaviest songs, sets off an even bigger pit, with the band feeding off the energy of the crowd and vice versa, with everyone stomping, moshing, and headbanging harder. While there is no real way to describe what Alex does on stage—one has to witness it for themselves—he was going even harder at the end of the show. 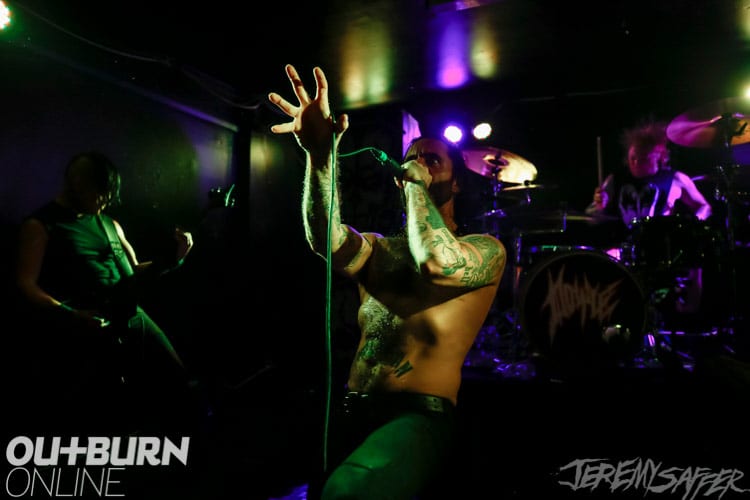 Doyle ended the set with two back to back bangers, “Learn to Bleed” and the title track from their new album, “Kiss Me as We Die,” as Alex grabs both mics, crawling around on stage singing, while Doyle continues to stomp and smash the riffs from his guitar. Then the band immediately exits the stage through the crowd, while the crowd, almost frozen, looks on in awe of what they just witnessed, such a satisfying and incredible show from one of the best touring bands out there. It takes a moment for everyone to come back to reality and start moving towards the merch booths and exits. 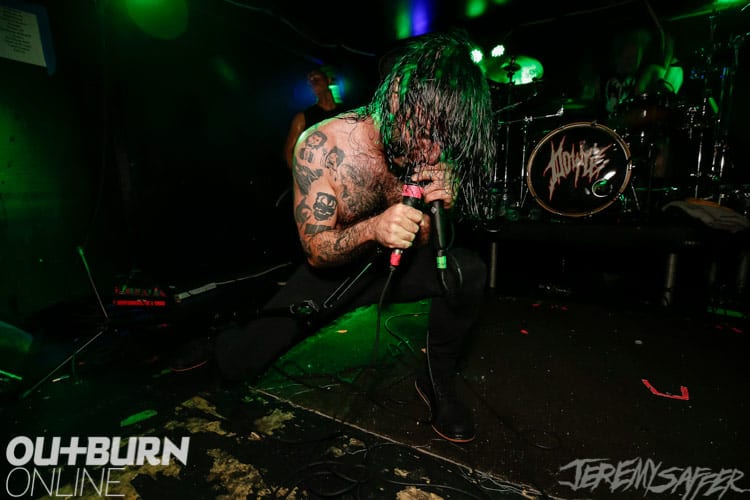 Having seen the band’s first tour, which was half original and half covers, it was great to witness a full hour set of original songs from both of their incredible albums. It’s always amazing to see Doyle and Alex’s energy coexist on stage, like two separate but equally impressive forces of destruction that, when combined, work perfectly together. Brandon and Wade are also absolutely incredible on stage, playing every part perfectly and gaining more energy as the show goes on.

Doyle has made it clear that this is no punk show, no Misfits show, no Cancerslug show. This is Doyle! Those going to the shows hoping to see or hear legacy material may not hear it, but they certainly won’t leave disappointed, as Doyle has proven again that they are not just incredible on album, but even better live. 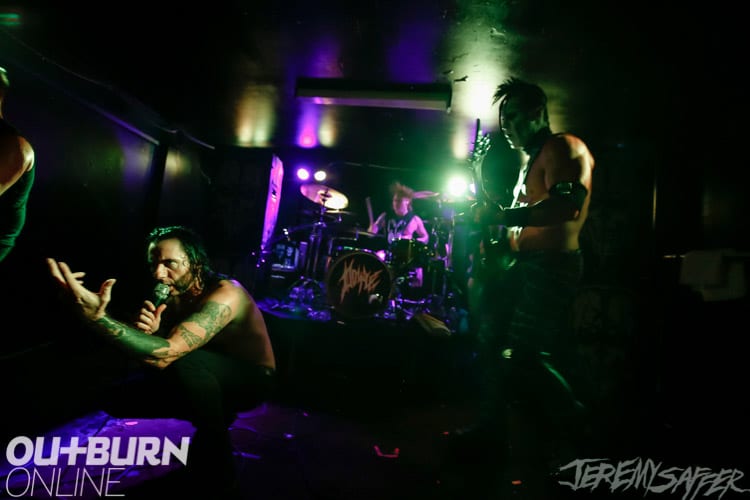