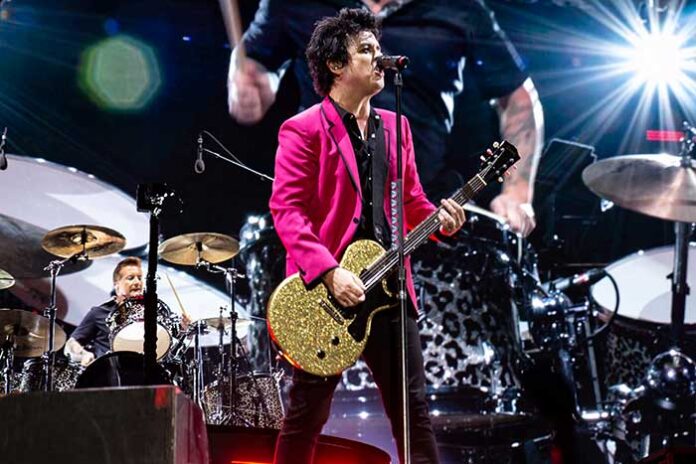 HELLA MEGA TOUR with The Interrupters, Weezer, Fall Out Boy, and Green Day

On August 27th, the Hella Mega Tour hit the Bay Area with The Interrupters, Weezer, Fall Out Boy, and hometown band Green Day. Due to the pandemic, this show had been rescheduled, but the wait was definitely worth it. With Green Day being not only the headliner but the local band on the bill, it was really incredible to have this show set at Oracle Park, or as others might know it, as the stadium where the San Francisco Giants play.

The show started out with The Interrupters who are a LA based ska punk band. They did a great job of getting the crowd up and moving in anticipation for the rest of the show. The band performed some of their popular songs “A Friend Like Me,” “Take Back the Power,” and covers like “Ghost Town” by The Specials and “Bad Guy” by Billie Eilish.

Next up was Weezer who are also from LA. The crowd really enjoyed Weezer’s set and were able to hear some of their most recognizable songs like “Pork and Beans, “Beverly Hills,” “Hash Pipe,” and “Buddy Holly.” They also did a cover of Toto’s song “Africa.” Everyone has taken notice of singer Rivers Cuomo’s new look, as he’s sporting a very 80s look with his mullet and leather jacket.

Fall Out Boy came prepared to really give the crowd a fun show. They had a lot of pyrotechnics and bassist Pete Wentz even had a flamethrower attached to his bass. The crowd had a ton of energy and excitement during their set and were able to hear some of their most famous songs like “Dance Dance,” “Sugar, We’re Going Down,” “Centuries,” and “Uma Thurman.”

Last but certainly not least was the headliner and local group Green Day. The energy from the crowd was incredible, and you can tell that there were so many locals there with pride and excitement for their favorite local band. Being able to watch Green Day from the crowd with the Bay Bridge in the background is something people don’t get to see very often and was really incredible to witness. Their set opened up with a “drunk bunny” running around the stage while “Bohemian Rhapsody” and “Blitzkrieg Bop” played in the background. Green Day performed a 21 song set list with a mix of classics and two covers. They played some of their most popular songs like “American Idiot,” “Holiday,” “Welcome to Paradise,” “Wake Me Up When September Ends,” and “Good Riddance (Time of Your Life).” They also performed “Rock and Roll All Nite” by Kiss and “Knowledge” by Operation Ivy. Green Day had a great fireworks show to end a perfect night in the San Francisco Bay Area.