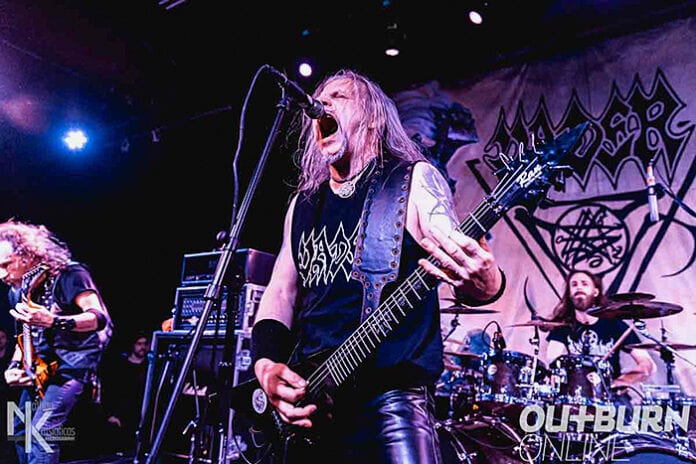 Godfathers of death metal, Poland’s Vader just wrapped up a month long tour of North America—their first here in almost three years. As luck would have it, it also happened to fall on big anniversaries of three of their most revered albums—De Profundis (25 years), Litany (20 years), and The Art of War (15 years), giving the band an excuse to bring out some deeper, older cuts on this run. Vader was accompanied by Americans Abysmal Dawn and Italian death metallers Hideous Divinity. We caught up with the tour as it was playing one of its final few stops in Seattle at Club Sur. The demographic represented by those in attendance was quite spread out, ranging from older teens and young 20-year-olds to folks in their late 30s and 40s, and even a few in their 60s. It was a diverse crowd.

The night began with several local acts, most notably, Seattle’s own Visceral. Local legends, the band got the mosh pits spinning before the touring acts even took to the stage. Then it was time for Rome’s Hideous Divinity to get down to business. Their set began with “Deleuzean Centuries,” and the slow and crushingly heavy “The Embalmer.” These Italians don’t mess around—the locals were great, but there was a clear upping of the intensity and stage presence in Hideous Divinity’s performance. Vocalist Enrico Di Lorenzo was spectacular in his delivery of each and every guttural note, as he and his bandmates raced through their eight song set. It took a few songs for the audience to respond in kind, opening up circle pits to the blisteringly fast “Bent Until Fracture.” I can’t wait to see more of this band. Here’s hoping they set about another North American tour soon.

Representing West Coast American death metal on this tour, Abysmal Dawn did their home region proud. Vocalist and guitarist Charles Elliott glared down at the assembled masses as he grunted and growled out each note of opening track “Programmed to Consume.” Their set included new song “Hedonistic” from their upcoming April release, Phylogenesis, but also included fan favorites “Inanimate” and “In Service of Time.” The set saw even more moshing and a stage dive or two, as the impeccably tight death metal band whipped through their performance. They ended with the cataclysmic number “The Inevitable Return to Darkness.”

At last, Vader was up next! The previous acts had all been fantastic, but as Vader took to the stage, something about the way frontman Piotr Wiwczarek and his cohorts completely owned the venue as they shredded their way through the ridiculously fast track “Silent Empire,” giving the feeling that Vader was on a completely other plane of existence. Their live show is just that epic. They bring the brutality on a whole other level, and man, are they tight musically.

Their set went forward almost like a giant death metal machine, methodically blasting through track after track, Wiwczarek’s signature guttural tones piercing through the cacophony like a call to battle. And battle did ensue. Even the heavy metal dads in attendance—who were a bit tired out and had a bit too much to drink—managed to muster the energy to mosh their hearts out. The night would go on to feature mega hit “Triumph of Death” and their popular cover of Slayer’s “Reign in Blood,” which was just as incredible live. There are few bands of Vader’s vintage that live up to the hype live anymore. With as many lineup changes as they’ve had over the years, Vader still carries the death metal banner high and does so with unrelentingly heavy live performances.