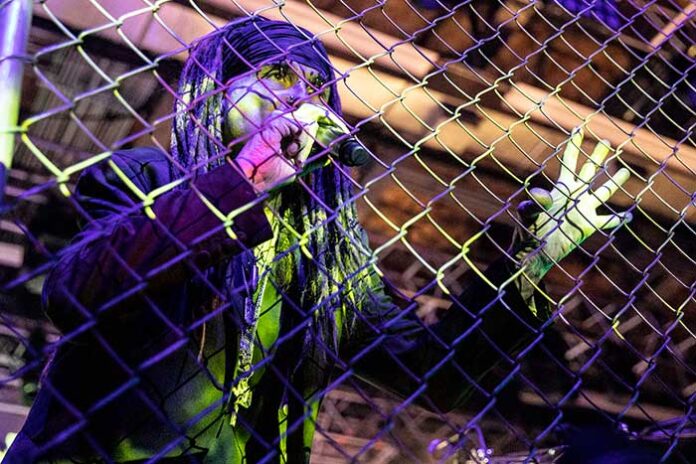 MINISTRY with Melvins and Corrosion of Conformity
Anaheim, CA
House of Blues
04.13.22

After being postponed three times, Ministry was finally able to bring The Industrial Strength Tour to the House of Blues in Anaheim, and it was well worth the wait. Fans started lining up to be let into the venue hours before the doors even opened, all with the expectation that they were going to go home that night with the biggest bang-over they have ever experienced, and every single band this night delivered more than hoped.

Opening the night was heavy metal cult favorite Corrosion of Conformity, with Pepper Keenan (lead vocals, rhythm guitar), Woody Weatherman (lead guitar), John Green (drums), and Mike Dean (bass, keyboards). It would not be unexpected to find the venue barely filled by the time the first opening band takes the stage, however, C.O.C. has a well earned loyal following that filled the venue to near capacity. C.O.C. opened with “Bottom Feeder,” and followed with “Paranoid Opioid,” “Shake Like You,” “Diablo Blvd,” “Senor Limpio,” “Vote with a Bullet,” “Wiseblood,” “Albatross,” “Who’s Got the Fire,” and closed with “Clean My Wounds.”

Next up was Melvins, with a lineup that includes Buzz Osborne (lead vocals, guitar), Dale Crover (drums), and Steven Shane McDonald (bass). Melvins takes a lighter approach to metal, literally, by keeping their stage well lit with bright colors and a photograph of Endora, the troublesome mother from the classic television show Bewitched projected on the wall behind them throughout their set. Melvins opened with “The Kicking Machine,” and excited fans with the rest of their set—“It’s Shoved,” “Anaconda,” “Queen,” “Charlie,” “Billy Fish,” “Civilized Worm,” “Never Say You’re Sorry,” “Evil New War God,” “Hooch,” “Honey Bucket,” and closed with “The Bit.”

After years of waiting in a dark corner of a closet, cursing the universe for denying us our Ministry fix, the time had finally come. The Industrial Strength Tour is a celebration of the 30th anniversary of The Mind Is a Terrible Thing to Taste, and it was nothing less than extraordinary, complete with an ode to their early tours—a chain link fence surrounding the stage and psychedelic imagery projected behind them. Uncle Al started the set by repeatedly raging against the fence, in what seemed like a desperate effort to escape the cage as other members casually played next to him, ignoring his struggle that ultimately proved to be futile and a fitting performance for the opening song “Breathe.”

This night was already perfect, and then Ministry used the encore to perform songs from their 15th studio album, Moral Hygiene—“Alert Level” and “Good Trouble.” Oh, and they were not done giving just yet. For their final encore, they brought out a very special guest, Billy Morrison—guitarist for Billy Idol—to accompany them on “Search and Destroy.”