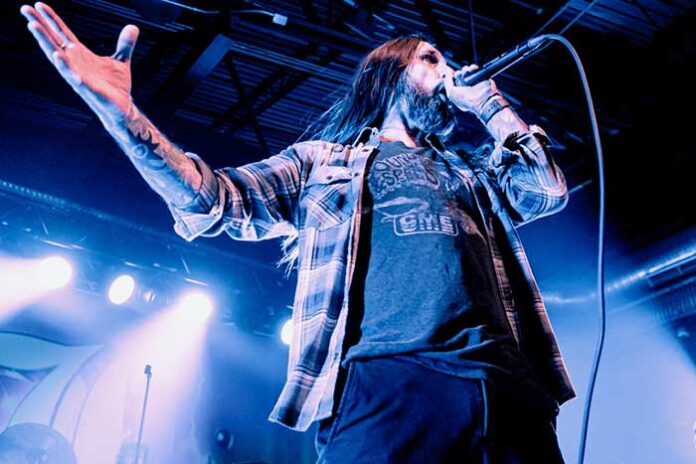 Tis the season for holiday shows, and we may have caught the biggest and heaviest one this year at Buffalo native’s Every Time I Die’s annual two day show Tid the Season—also known to the most diehard of ETID fans (aka Etidiots) as “Shitmas.” Held at a repurposed grain mill turned venue Buffalo Riverworks, this year’s lineup for the shows on December 10th and 11th was absolutely stacked with a variety of acts spanning several different genres—from hardcore acts like END and Knocked Loose, to post-hardcore act Circa Survive, hip-hop OG Ice T, and more—there was something for everyone to love!

The venue itself was decked out in holiday lights, complete with Every Time I Die’s all seeing “I” logo lit up in green and red. In honor of the occasion, local brewery Thin Man released a lager Then We War! named for a line in the band’s track “All This And War” off of their latest release Radical. Additionally local artisan Oxford Pennant had a booth set up full of Every Time I Die patches and seamstresses onsite sewing them onto fans’ clothing while they waited. Truly, it was an Etidiot’s paradise.

Day 2 of Tid the Season started in the early afternoon at Buffalo Riverworks with a couple hours of professional wrestling in a ring that had been set up in the center of the venue. Among the wrestlers participating that day were local favorite and member of the “Buffalo Brothers,” Puf (wrestling today as Santa Puf), and The Blade, part of the AEW duo The Butcher and The Blade, which also features Every Time I Die lead guitarist Andy Williams (The Butcher). Highlights included Puf blasting his opponents and the referee in the face with confetti blasters and the main event, which featured The Blade (Jesse Guilmette) wrestling against AEW wrestler Evil Uno. Of course, it wasn’t long before Williams emerged in character as The Butcher to drag his fleeing opponent back to the ring, offer moral support, and towards the end of the match even jumped into the ring to help The Blade suplex Evil Uno to the cheers of the couple thousand fans in attendance.

After a bit of a break to remove the wrestling setup, the night’s music got started with an absolutely mind-bogglingly heavy performance from hardcore supergroup END. The band consists of Counterparts vocalist Brendan Murphy, acclaimed producer and Fit for an Autopsy guitarist Will Putney, ex-Misery Signals and ex-Shai Hulud guitarist Gregory Thomas, bassist Jay Pepito (Reign Supreme, ex-Blacklisted), and drummer Billy Rymer (ex-The Dillinger Escape Plan). With such a pedigree it’s no wonder the band absolutely crushes it live!

While their set was short in duration, the deep throaty growls of Murphy and buzzsaw guitar tones of Thomas and Putney got the mosh pits spinning up from the get-go. As the band got to the crushing breakdown in “Pariah,” the crowd joined in, voices loud for breakdown with, “YOUR F*CKING ENNNNNNND!” You can catch END at Four Year Strong’s holiday show December 30th at The Palladium and on a headlining run this winter.

Hamilton, Ontario alternative rock act The Dirty Nil was up after, taking things down a bit in heaviness but not in energy. Guitarist/vocalist Luke Bentham and bassist/vocals Sam Tomlinson were fun to watch, with Bentham using any break in singing to leap and kick around the stage.

Apparently this was the Canadian hour, because up next was a highly anticipated set from Vancouver based progressive metalcore group Spiritbox. The floor and balconies were packed as the band went on, opening their set with “Sunkiller.” As vocalist Courtney LaPlante got to the whispered, ASMR part of the track, you could almost hear a pin drop, as everyone was waiting with great eagerness for the breakdown and switch to guttural vocals. When it hit, pandemonium ensued as the crowd moshed and screamed along, “SUN KILLER SING ME TO SLEEEEEEEP!” Their set would go on to include fan favorites “Blessed Be,” “Rule of Nines,” and “Circle With Me,” among others, before culminating in the viral track “Holy Roller.” The venue was buzzing about how good the set was for much of the rest of the night. You can catch Spiritbox opening for Every Time I Die and Underoath early next year.

Whereas Day 1 of Tid The Season saw their alter ego Mariachi El Bronx, on this night, fans were treated to a performance from The Bronx. Seizing on the warmed up crowd, they put on a fantastic set of fast hardcore punk music that saw frontman Matt Caughthran leaping from the PA speaker into the audience at one point—unfortunately to be dropped almost immediately. Seemingly taking that in stride, he performed from the center of a circle pit before climbing over and getting back on stage to hand out wrapped gifts that I can only assume were Bronx t-shirts and other merch to crowd surfers and audience members.

Kentucky hardcore giants Knocked Loose continued the exponential rise in intensity as they kicked into a 14 song assbeater of a performance that would feature several guest appearances from other bands on the bill. Starting off with “Where Light Divides the Holler” from their latest release A Tear in the Fabric of Reality,” the band immediately had fans flying over the barricade and pitting like mad. Frontman Bryan Garris and his cohorts were in peak form and sounded album perfect as they continued through a blisteringly fast and heavy set. Midway through the track “Billy No Mates,” END’s Brandon Murphy appeared, mic in hand and the crowd went nuts. Exhorting the crowd to mosh even harder, Murphy’s gutturals along with Garris may have been what caused a section of the giant old mill building across the street from the venue to collapse right about then (if not, it could’ve been the wild winds that had the act to follow, Ice T thinking he was going to die during his landing).

If that wasn’t enough, LaPlante may have broken the internet and certainly surprised the hell out of everyone in attendance when she emerged to annihilate a guest spot on the song “A Serpent’s Touch.” The level of comradery between bands in the heavy music genre is part of why it’s always felt so welcoming for fans, so it was awesome when Every Time I Die frontman Keith Buckley appeared for yet another guest spot during their set, for the song “Forget Your Name.”

This performance alone would’ve been worth the trip for many, but the night was not over! Famed actor and hip-hop OG Ice T was up next. After a bit of a long stage changeover, Ice T’s DJ emerged and soon after the man himself as well. Mind you, this was not Ice T performing songs off his metal project Body Count to 5,000 metalheads. This was Ice T rapping after several heavy acts had already played. While some may not have fully embraced it, the majority of those in attendance seemed to love the throwback to the 80s and 90s.

After playing a few songs, including “Retaliation,” “I’m Your Pusher,” and “Girls L.G.B.N.A.F.,” Ice T brought a fan up from the audience to help him with “O.G. Original Gangster.” Before the song started he had joked that this would either be an amazing memory for a fan who knew the lyrics or followed his prompts, or one they’d rather forget. Suffice to say the fan that partook likely fits into the latter category.

With the audience riding off of the high of seeing so many great performances and the anticipation of a second night of Every Time I Die up next, the venue was seething with excitement when the curtain fell and the opening notes of “Roman Holiday” rang out. Whereas the last night was all hits and newer material off of their latest release Radical, this night would feature a number of deeper cuts and even a couple of live debuts. What’s more, as perfect as the band and frontman Keith Buckley had sounded the previous night, somehow they managed to sound even better this time around.

Their performance continued, with “Romeo a Go-Go” and “A Colossal Wreck,” with little pause for fans to catch their breath. The audience was then treated to the first ever live performance of “Desperate Pleasures,” off of Every Time I Die’s latest LP—and I’m not sure who was louder during that one, the audience singing along, or Buckley, but it was a hell of a good time! As the night wore on, they pulled out a few necessary repeats from the previous night like, “Underwater Bimbos from Outer Space” and “Floater,” but for the most part the set was completely different.

Diehard Every Time I Die fans were rewarded with rarer tracks “Indian Giver” and “Off Broadway” and another live debut of a new track from Radical, the more melodic “People Verses.” The Bronx frontman Matt Caughthran joined the band for a performance of “The Sweet Life,” off 2009’s New Junk Aesthetic. As tired as many were from an exhilarating evening of music and for many, a late night the evening before, the energy and volume of crowd participation was even greater than the previous night. As with Friday night, they made themselves heard especially during “Map Change,” where dozens of fans, belting their hearts out along with Buckley crowd surfed their way to the front. As the 5,000 or so satisfied concertgoers slowly made their way out of the venue into the dark, cold, and windy Sunday morning, there were few faces not grinning widely. As if it wasn’t cool enough for Every Time I Die to throw this massive holiday celebration for their fans, the band, along with other acts on the bill, managed to raise nearly $6,000 for Buffalo area nonprofits and charities ranging from the local children’s hospital to organizations supporting animals and the homeless. Here’s hoping the annual celebration of all things Every Time I Die continues in 2022.