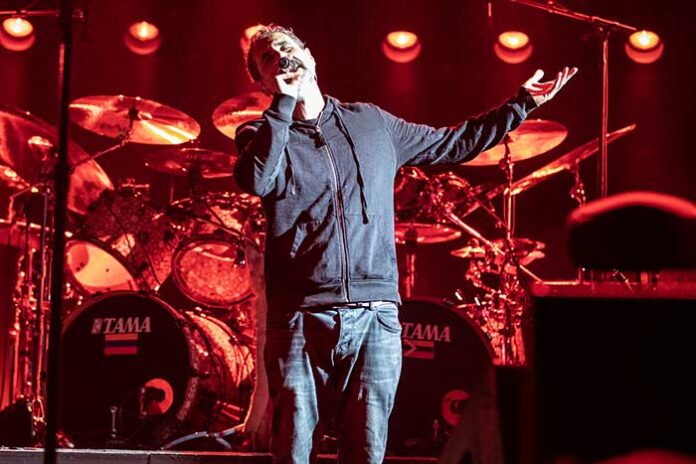 SYSTEM OF A DOWN with KORN
Helmet and Russian Circles
Los Angeles, CA
Banc of California Stadium
02.04.22

System of a Down and Korn came to Los Angeles with some friends for a few special occasions, and we have been made all the better for it. Russian Circles, an instrumental metal band from Chicago, played a short yet moving three song opening set: “Harper Lewis,” from their 2008 album, Sation, “Vorel,” from their 2016 album Guidance, and “Quartered,” from their 2019 album Blood Year. Helmet, an alt-metal band formed in 1989 in New York, followed with a 12 song set that highlighted all of their hits from the 90s, including “Blacktop” and “Bad Mood” from their 1990 debut album Strap It On.

The crowd was anxious, excited, and ready when Korn—Jonathan Davis (lead vocals, bagpipes), Ray Luzier (drums), Brian “Head” Welch (guitar), James “Munky” Shaffer (guitar), and Ra Diaz (from Suicidal Tendencies filling in for Reginald “Fieldy” Arvizu on bass)—took the stage around 8 p.m. Beers were flying, people were screaming, and the security team was simultaneously ready for anything and looking like they were having just as good of a time as the audience.

For diehard fans, this was an especially anticipated show. Requiem, Korn’s 14th album, was released on this very day. Despite having only been available for a few hours before the show, the audience was as ready for “Start the Healing,” as they were for “Here to Stay,” “Falling Away from Me,” “Shoots and Ladders (with bits of Metallica’s “One” thrown in), “Got the Life,” “Coming Undone” (with bits of Queen’s “We Will Rock You”), “Freak on a Leash,” and their medley of “It’s On/ Trash/ Did My Time.” Korn’s hour-long set was filled with nostalgia, new memories, and a permanent sense that Korn will forever remain one of the greatest bands the world has ever known.

Finally, after already experiencing hours of extraordinary music, System of a Down—Serj Tankian (lead vocals, keyboard, rhythm guitar), Daron Malakian (lead guitar, vocals), John Dolmayan (drums), and Shavo Odadjian (bass)—took the stage for a two hour set to celebrate the 20th anniversary of the release of their album, Toxicity. In honor of this milestone, the set included their best from their breakthrough album: “X,” “Prison Song,” “Needles,” “Deer Dance,” “Psycho,” “ATWA,” “Bounce,” “Aerials,” “Toxicity,” and the song that introduced me, like so many others, to System of a Down, “Chop Suey!”

Mixed into the 27 song set list, they performed their two newest songs that were released in November of 2020, “Genocidal Humanoidz” and “Protect the Land.” It was absolutely worth the 15 year wait for this new music, even if it was only two songs, just as it was worth the several years wait to see them perform live again. The rest of the audience shared this enthusiasm, as they could barely be contained by the metal barricades that separated them from the security guards, medics, and videographers/photographers who were there to capture this monumental performance.

Thousands of people, all gathered in this stadium, drinking, laughing, and singing, sometimes screaming, together in celebration of a performance that proved that no matter how much time has passed, System of a Down has earned the devotion of their fans.