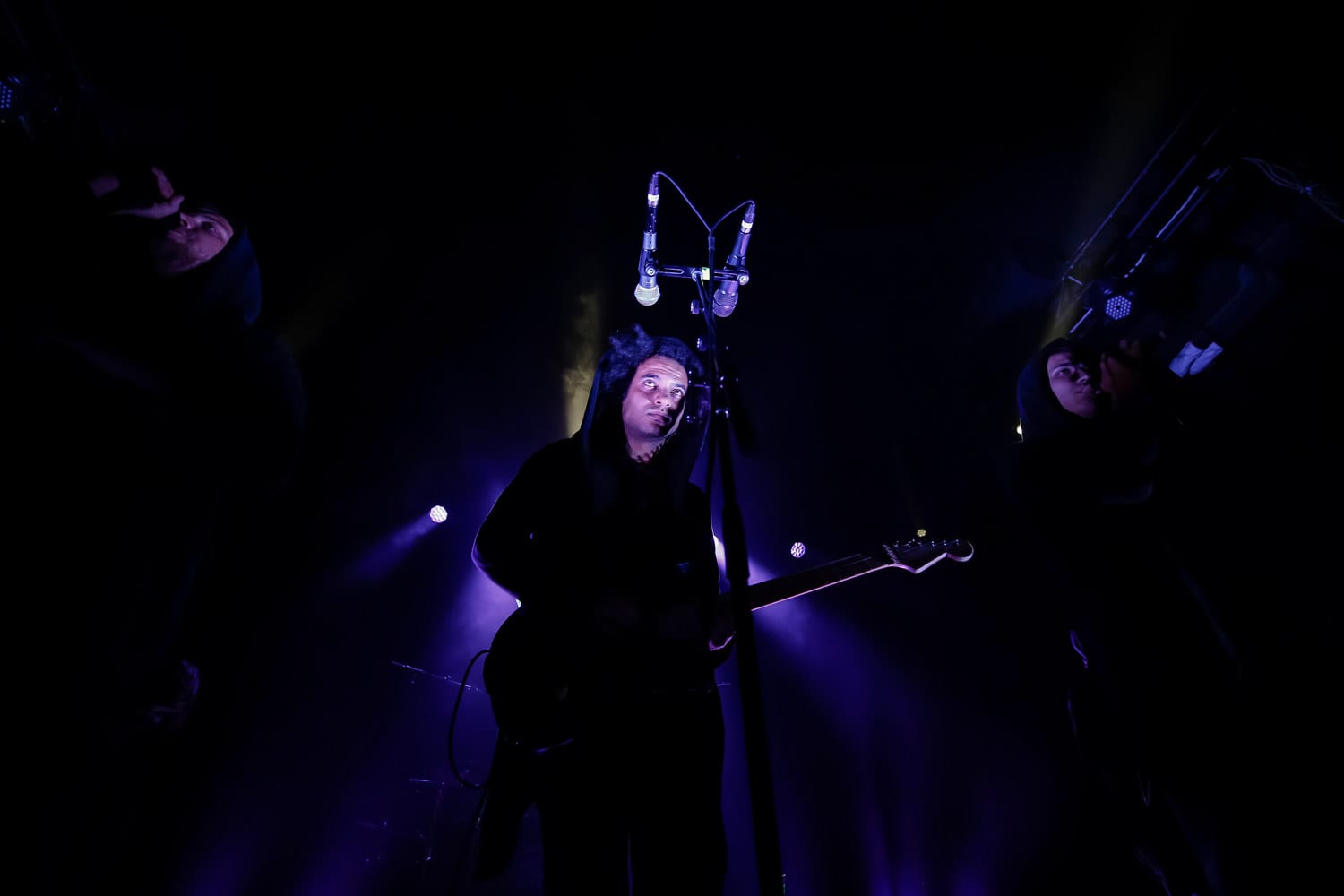 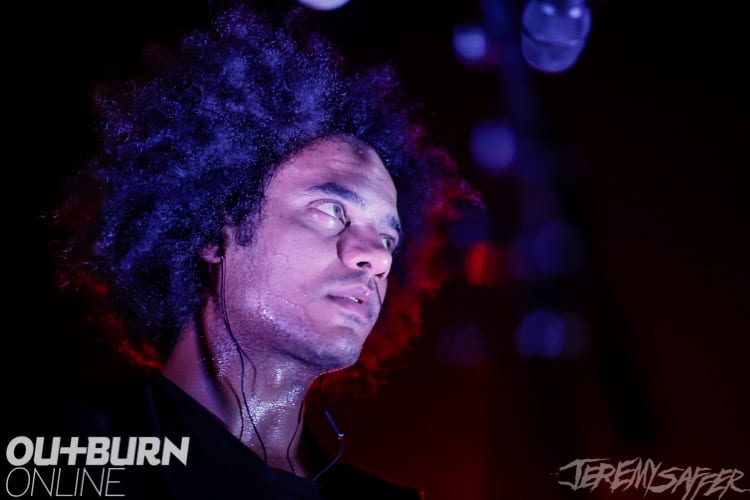 Photos and Words by Jeremy Saffer

The biggest question on the minds of those who haven’t seen Zeal & Ardor live is if the music will translate well from record to stage. With such a unique and specific sound, one might think that Zeal & Ardor could only be fully realized with studio magic, but they have surely proven that is not the case here. They are as formidable a band on stage as they are on record.

Being their first US headlining tour, you might wonder what songs they would choose to be in their set…all but one. This is a very unique situation where the band has about 20 songs between its released albums (excluding the demo/electronic interludes/intros). So, they can fit everything into a single powerful hour and a half set.

While fans of “What’s a Killer Like You Gonna Do Here?” may miss that one track, they play literally every other song from Devil Is Fine and Stranger Fruit, as well as songs from their original demo and other singles that haven’t been released on an album. So, if you have a favorite Zeal & Ardor song, a deep cut, a greatest hit, they will be playing it—every song from their new album Stranger Fruit, all but one song from Devil Is Fine, and even some songs from the original demo and others that haven’t been released on a physical album.

The doors opened and the eclectic crowd started trickling in. A vastly diverse crowd that one would normally not see in the same spot comprised of metal, indie, hipster, alt, goth, and, of course, being in Boston a good amount of Berklee and various art students, young, old, and everything in between, all brought together to see Zeal & Ardor.

Boston based post-metal band Astronoid is the opener for the entire tour, and this just so happened to be their hometown show. This is a band you do not want to miss. They are a five piece melodically driven band with three guitars and soft harmonized (through effects), high range vocals. They mix elements of prog, black metal, thrash, and more, though heavier on the melodic death and black metal side musically and prog side vocally, producing a massive atmospheric wall of sound. The songs are as melodic as they are atmospheric and musically cover everything one could want from a metal band—a huge sound, blastbeats, heavy riffs, incredible vocals, massive melodies, and more. Vocally, it’s all high range (think Coheed and Cambria, 3, etc.), but with a harmonizing effect that gives it the feel of multiple singers throughout the entire set. While those who don’t like high range vocals or the harmony effect may not get into it, the vocals really fill in the sound and never became cumbersome. With a band that sounds somewhat like Coheed and Cambria/3 meets black metal/thrash/prog, Astronoid is the perfect band to set the stage for Zeal & Ardor.

The stage goes dark, a double mic stand between two other mic stands are set up, and the band comes out to “Sacrilegium I” with a ring out into “In Ashes.” As soon as lead vocalist Manuel Gagneux starts in with “Burn the young boy, burn him good,” the entire Boston crowd starts singing along with every word and harmony throughout the entire set. The vocal approach of Manuel with Denis Wagner and Marc Obrist as backing vocalists sounds massive. It emulates the recorded vocals well and even gives the songs a bit more power. And, of course, hearing songs from Devil Is Fine with live drums makes it sound so much bigger. 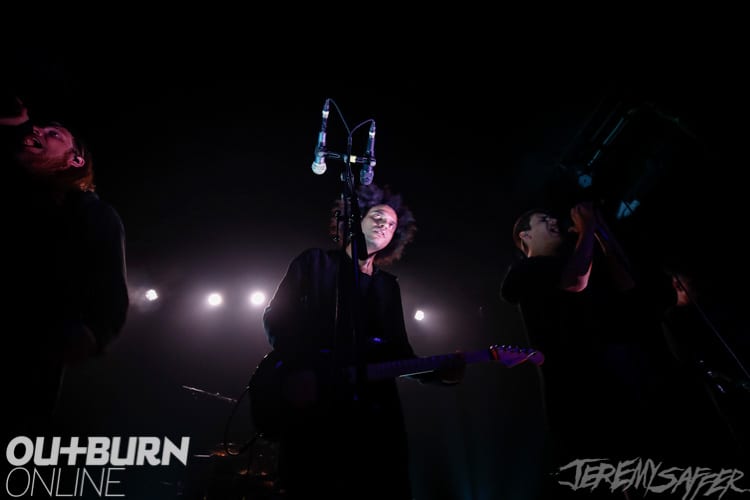 They did a great job interlacing songs from their releases, playing “Servants” next, with the entire crowd again singing along, knowing every word to an album that was just released a few months back. This song was where you could start to see a very small bit of variation from record to stage, as Manuel is a vocalist seething with talent and uses some tasteful variation in inflection and power in his live vocal performances with some of the more bluesy vocal parts. The songs gets heavy, and Manuel goes back and fourth between his singing and screaming microphones, while the Zeal & Ardor logo behind him lights up in different ways, an excellent accent to the stage show. 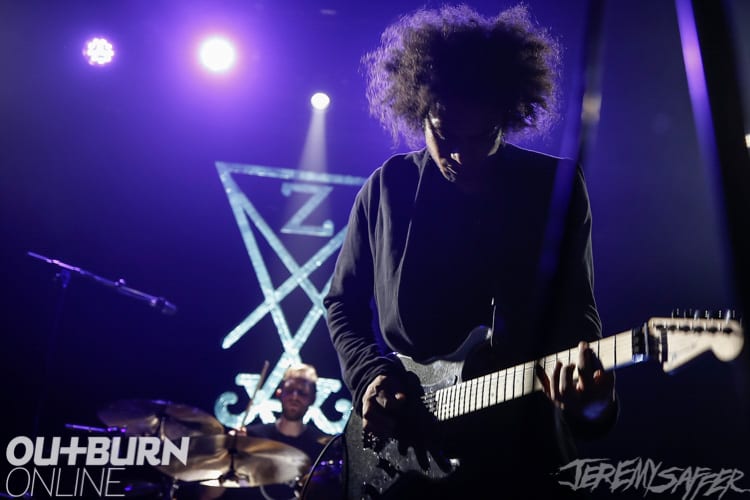 There are no frills or unnecessary extravagance to their stage set up. It’s simply a band on stage playing, and their logo behind them. The music and the performance is all that’s needed to fill the stage and fully engage the audience. 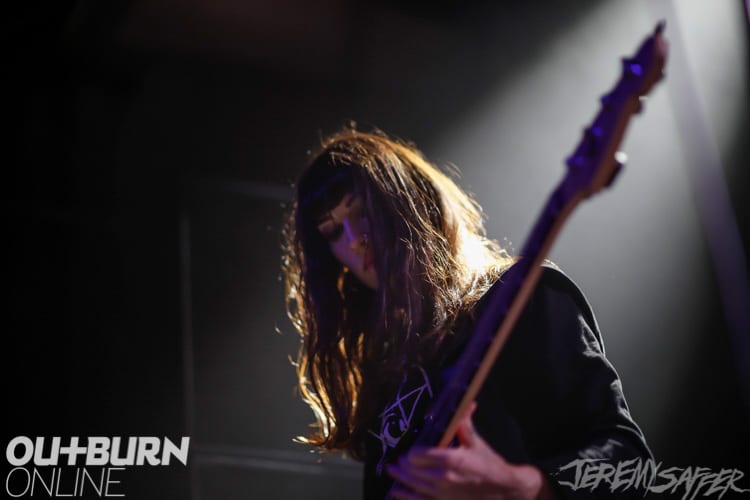 The beginning of the set was an onslaught of bangers, with “Come on Down” following a crowd clapping “Row Row” and “We Never Fall,” one of the heavier songs that are performed live but not found on an official release, into one of the best songs of the set, “Blood in the River,” which sounds even better on stage than on record. While most of the songs sound spot on, there are a few of the older songs that sound improved with live instruments, and no question “Blood in the River” is one that gains a bit more heaviness while performed live, and the band knows it, seeing Marc, Denis, Tiziano Volante (guitar), and Mia Rafaela (bass) moving around a bunch more on stage during the heavier parts of the song. 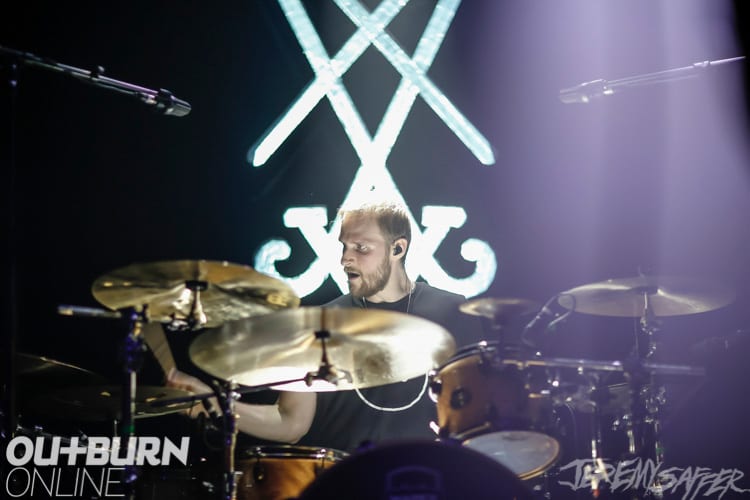 Next up was the more soulful “You Ain’t Coming Back,” where Manuel’s vocal ability really shines, as does the back up singers. It shows that Manuel is such a multifaceted vocalist being able to seamlessly go from incredible soulful vocals to rock and to screaming, and each is just as incredible as the other. 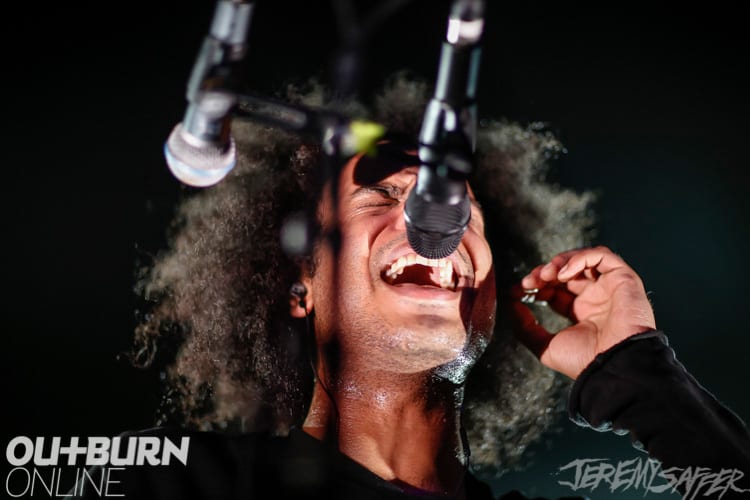 Picking things back up was a searing rendition of “Fire of Motion,” the drummer Marco absolutely slaying, showing what solidifies his incredible role behind the kit for Zeal & Ardor, while many of the effects in the song were played on guitar by Tiziano rather than being done on backing tracks.

Continuing on a Stranger Fruit group, “Ship on Fire” was next, and its one of those songs where you hear how important it was to have the dual backup singers even if its for the short moments in a song at first. They perfectly fill out the haunting chant vocals, and when that breakdown kicked in and its backing vocals, it sounds so massive. 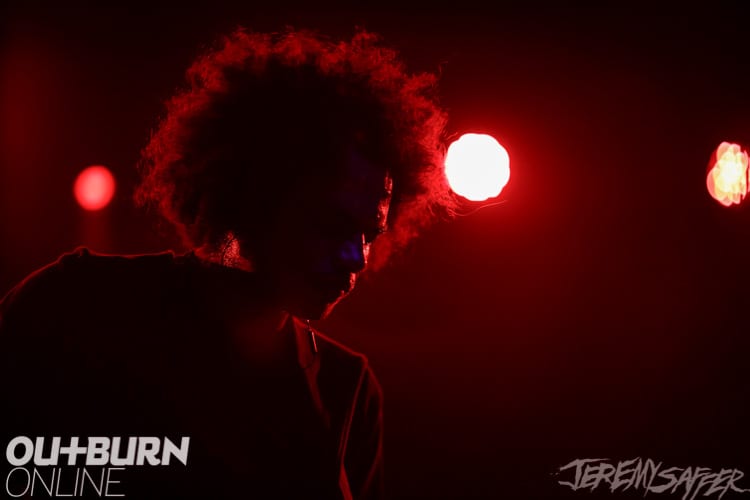 Like the album, “Waste” was next into “Hold Your Head Low,” which is a song that’s been a staple of their live performances but has never been released officially, and it’s truly a gem to catch live.

Next up they slowed things down a bit with Stranger Fruit’s rhythmic title track, which, being a very effect driven song, sounds as incredible live as on record, proving that the band is a perfect set of musicians to bring Zeal & Ardor’s unique sound to life into the fast paced “Cut Me,” another song that has not yet been officially released. 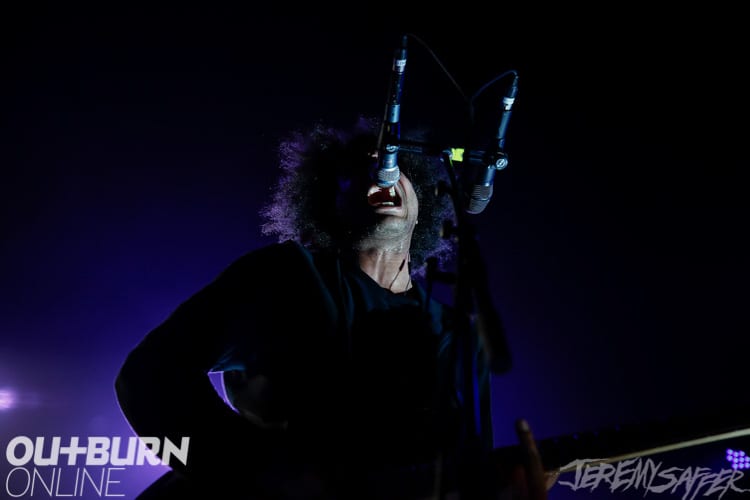 “Gravedigger’s Chat” was next, and it was one of the loudest and largest sing-along of the set. The crowd was as loud as the band, clearly a fan favorite that again translates perfectly. The song ends into the beginning of “Children’s Summon,” which rung out into “Built on Ashes,” which was another one with massive crowd participation singing both the lead, backing, and harmony vocals along with the band.

“We Can’t Be Found” saw a massive shift in the crowd, who until this song, didn’t have much movement beyond singing along. As soon as the heavier part of the song kicked in, the mosh pit started and didn’t stop for the rest of the set. This song really kicked it off, and the heavier part really hits so much more live than on record. The band walks off stage into the dark, as “Sacrilegium III plays,” and they return to stage for “Don’t you Dare.” They then played the “Intro” to Stranger Fruit, and just like every other song, the crowd sang the harmonies, hums, and words, showing that their fans are truly dedicated. 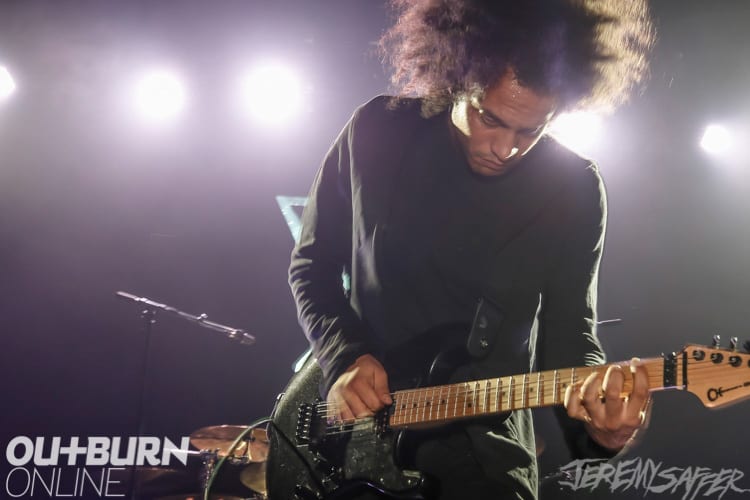 They closed out the full Stranger Fruit album with the haunting chant driven “Coagula.” The band not losing any energy after over an hour on stage, finishing up with “Devil Is Fine,” followed by the unquestionably heaviest song of the set “Baphomet,” which leads to the last burst of energy the crowd had for the biggest pit of the night. 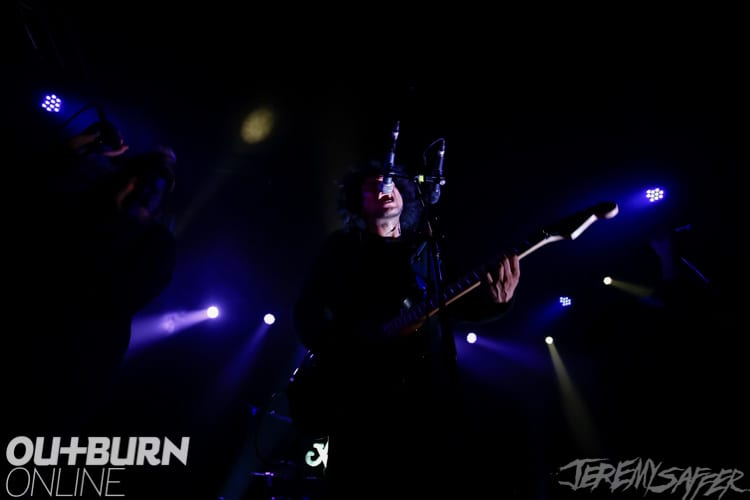 While many headlining bands play an hour, and most bands are unable to headline shows with only 20 or so songs in existence, Zeal & Ardor proves to be an unstoppable force who gives fans their all— an hour and a half headlining set, playing nearly every single song they have, as well as a handful of songs you can’t hear anywhere else but on stage. No one would leave a Zeal & Ardor show with any shred of disappointment, but with a sense of fulfillment. Every song one wanted to hear was performed perfectly. The music sounds as good or better live when compared to its recorded counterpart. The band (every member) gives its all throughout the entire performance and truly brings the music to life, laying waste to any shred of doubt about the quality (and quantity) of Zeal & Ardor’s live performances.

Any fan of Zeal & Ardor should make sure not to miss this unique opportunity to catch them performing on their first ever full US headlining tour. Now that Zeal & Ardor has a touring lineup, let’s all hope to see much more of them on stage (and hopefully in the States more often) in the near future.

Check out the full gallery below and check out our interview with Zeal and Ardor mastermind Manuel Gagneux here: 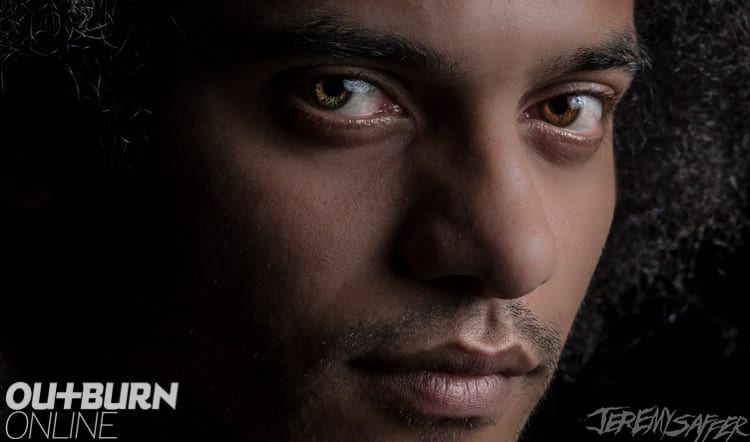 From Stranger Fruit to The Stage: An interview with Manuel Gagneux of Zeal and Ardor