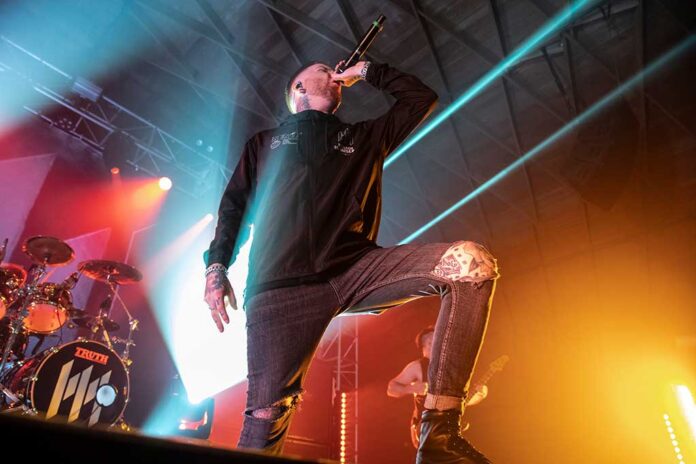 MEMPHIS MAY FIRE
with From Ashes to New, Rain City Drive, and Wolves at the Gate
REMADE IN MISERY TOUR
Ventura, California
Ventura Music Hall
07.19.22

Memphis May Fire has hit the road with friends From Ashes to New, Rain City Drive, and Wolves at the Gate, a combination of bands that, individually, make for a remarkable night, but together, leaves you gobsmacked that such an incredible show was even possible.

Up next was Rain City Drive. Matt McAndrew (vocals, guitar), Colin Vieira (bass), Weston Richmond (guitar), Felipe Sanchez (guitar), and Zachary Baker (drums) owned the stage like it was made just for them. They played a short set: “Waiting on You,” “Talk to a Friend,” “Heavier,” “Dreams,” “Prayers,” “Blood Runs Cold,” and “Cutting It Close.”

The third band of the night was From Ashes to New. Danny Case (vocals), Matt Brandyberry (rap vocals), Lance Dowdle (guitar), and Mat Madiro (drums) create a truly unique and unforgettable group. For a while, I had forgotten that they were not the headliner, as the audience was pumped up and singing along as if they were there solely for From Ashes to New. Their nearly one hour set consisted of “Panic,” “Land of Make Believe,” “My Fight,” “Broken,” “Heartache,” “Broken by Design,” “My Name,” “Scars That I’m Hiding,” “Crazy,” “Nothing,” and “Through It All.”

The final band of the night, the main event, the headlining group was Memphis May Fire. Matty Mullins (lead vocals), Kellen McGregor (guitar), Cory Elder (bass), and Jake Garland (drums) are beyond captivating together on the stage. The venue was packed with die hard fans who allowed themselves to be enveloped in the pure joy of sharing the night with Memphis May Fire. They opened their set with “Blood & Water,”which sent everyone into a frenzy after all the anticipation. They followed with “The Deceived,” “Left for Dead,” “Legacy,” “Somebody,” “Your Turn,” “Make Believe,” and “Prove Me Wrong” before “Miles Away,” which McGregor dedicated to all the fans in the audience who are active service military personnel that truly understand being away from those they love for extended periods of time better than most. Then came “No Ordinary Love” before they were joined by Danny Case for the finale, “Vices,” which can only be described as a perfectly epic finale performed by some of the most talented men I have had the privilege of seeing.

Obviously, they would not just leave us there. After an overwhelmingly vocal crowd demanded more, Memphis May Fire came back on stage and delivered two encores, “The Fight Within” and “The Sinner.”