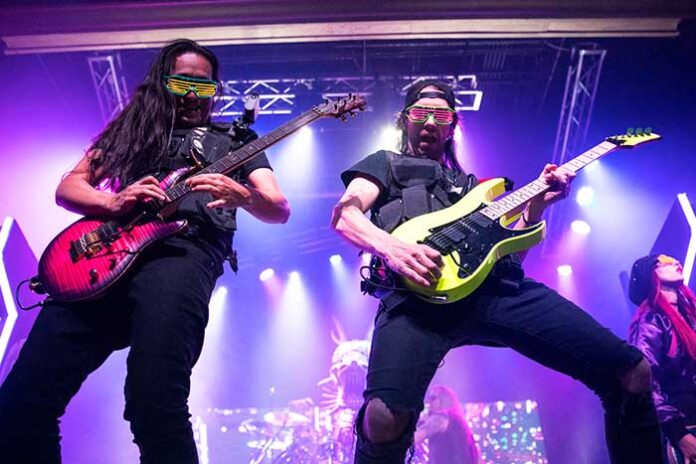 DRAGONFORCE with Seven Spires and Visions of Atlantis
Santa Ana, CA
The Observatory
03.07.22

DragonForce kicked off their North American Tour in Santa Ana, California and fans could not contain their happiness. Although I was saddened when I found out that Firewind would not be joining the lineup for this specific show, I was still ecstatic to witness three of the most epic storytellers in all of metal right now.

Seven Spires—Adrienne Cowan (vocals), Jack Kosto (guitar), Peter de Reyna (electric/upright bass), Chris Dovas (drums)—opened the show. Cowen’s ability to change effortlessly between melodic harmonies and deep throat screaming and growling makes her an absolute force in the metal world to be admired and worshiped. Their set included fan favorites “Gods of Debauchery,” “Lightbringer,” “Succumb,” and “Drowner of Worlds.” After they finished the last song, “Dare to Live,” of their heartbreakingly short set, the crowd demanded an encore by shouting, in unison, “One more song!” until the last piece of the band’s equipment had been removed from the stage.

Up next was Visions of Atlantis—Clementine Delauney (female vocals), Michele Guaitoli (male vocals), Thomas Caser (drums), Christian Douscha (guitar), Herbert Glos (bass). The combination of their pirate garb with the multi-toned lighting created an atmosphere of actually being at sea, at night, with sirens calling you and an uncontrollable need to follow their voices into the unknown. Having two lead vocalists is not a new concept. However, very few bands have been able to create a dynamic between the two as compelling and mesmerizing as Delauney and Guaitoli. Their set included the singles“Nothing Lasts Forever,” “A Journey to Remember,” and “The Deep & The Dark,” as well as their newest single “Legion of the Seas,” from their upcoming album, Pirates.

The venue was packed wall-to-wall with fans of every genre of music, which speaks volumes about the well earned love people have for DragonForce. Not only are they insanely talented and indescribably brilliant, they are a collective of the nicest and most dedicated musicians, who deserve the devotion of their fans. DragonForce live streamed this concert via Twitch, thanks to Herman Li, as they do all their shows, so that their fans have an opportunity to experience their shows at any time.

After two sensational opening acts that brought down the house, the power metal gods, DragonForce—Marc Hudson (vocals), Sam Totman (guitar), Gee Anzalone (drums), Alicia Vigil (bass), Herman Li (guitar)—took the stage. Hudson expressed his excitement to be back playing in front of an audience again after two years. You could actually hear the excitement in his voice and see the joy on his face. The show opened with a bang, literally. After a few notes of the opening song, “Highway to Oblivion”from their newest album, Extreme Power Metal, several canons lining the front of the stage shot off confetti bombs into the crowd and did so again a few times throughout the show. The stage and band were decked with their signature 80s style, including neon slotted glasses and old school arcade cabinets that rotated imagery from the arcade games that Li and Totman would climb upon repeatedly during their set. Every so often, Hudson would spray the audience with his CO2 cannon, covering the crowd in a heavy white fog.

Their heart stopping set continued with “Fury of the Storm,” “The Last Dragonborn,” and “Ashes of Dawn.” Then, they gave themselves a short break and the audience a little nostalgia by playing old Sega commercials for the audience, before coming right back to perform a medley of music from Castlevania and Final Fantasy. The real fun surprise was when Li drew our attention to Totman, who would be serenading us all on his banjo. The set continued with “Black Fire,” “Razorblade Meltdown,” and “Cry Thunder,” for which Hudson encouraged the audience to participate by singing the words “cry thunder.” Then, Hudson took a moment to explain that the next song, “Remembrance Day,” was written to honor those who fight and have fought for the lives and freedoms of others, which was followed by “Valley of the Damned.”

A mosh pit was well underway by the time the encore came around. They walked off stage, as is tradition, and when they came back, Husdon did a mini monologue about the ridiculousness of walking off stage when everyone knows that they are coming back to perform a couple more songs. The first song of the encore was one of the greatest things ever—their metal cover of Celine Dion’s “My Heart Will Go On.” I am not ashamed that I am a die hard Celine Dion fan, but I absolutely loathe that song. However, DragonForce’s cover made me want to run on stage and hug them all for giving that awful song a new, beautiful life. There was only one song that they could close the show with, and everyone knew what it would be. The song that was featured on Guitar Hero III, “Through the Fire and the Flames.”