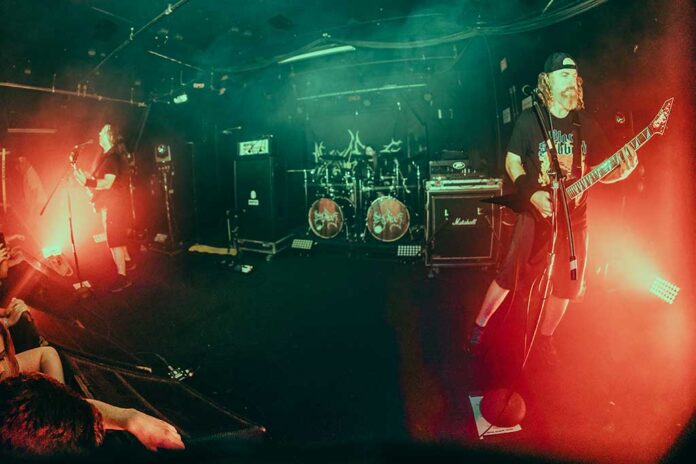 There was no preparing for the pure chaos that occurred on Sunday at The Palladium Upstairs. This heavy metal lineup of Undeath, Frozen Soul, Bodysnatcher, Chelsea Grin, and headliner Dying Fetus sold out, as fans packed the venue to its brim.

The evening began with New York’s Undeath. Immediately after the band started playing, a mosh pit broke out through the entire bottom floor of the venue. There were waves of crowd surfers and stage divers before the end of the first song. The insanity had only just begun. Alexander Jones (vocals), Kyle Beam (guitar), Matt Browning (drums), Tommy Wall (bass), and Jared Welch (guitar) were all so facially expressive that it added to the experience of the show and the feel of the music. Each of them brought such incredible energy to the performance, as they were celebrating the six week tour coming to an end. The audience held no hesitation, as they joined Jones screaming into the mic every chance they had. Undeath played “Human Chandelier” off of their 2022 album It’s Time…To Rise from the Grave, and their fans could not have been happier. One fan had so many requests that they let him call the last song. He chose the title track off of their 2020 album Lesions of a Different Kind. The venue was filled with pure intensity, and as Undeath closed out their set, it was clear the anarchy was just beginning.

Up next was Texas’ Frozen Soul. Chad Green (vocals), Samantha Mobley (bass), Matt Dennard (drums), Michael Munday (guitar), and Chris Bonner (guitar) stepped on stage with a ferocity in their eyes. The mic stand was made up of a chain link, which added to the raw energy of the band. Green gave a moving speech about how tough the past few years have been and that it is important to appreciate those around you and how everyone in the venue was a family. After these beautiful words, the second round of chaos began. Each member of the band had perfect synchronicity with the music, each head bang only intensified the drops. Munday had some intense moments screaming lyrics back and forth with fans, the passion from each side of the stage was incredible.

The stage quickly changed over to Bodysnatcher. The Florida band took the stage with smiles on their faces, as they looked over the sea of people thrilled to see them play. Kyle Medina (vocals), Chris Whited (drums), Kyle Shope (bass), and Kyler Carter (guitar) played a quick yet powerful set. They played a mixture of songs from all of their albums including, “E.D.A.” and “Wired for Destruction” off of their 2022 album Bleed-Abide. There was no shortage of movement during this set. The pit seemed to grow larger and larger, as stage divers would come in doubles and triples. There was so much action in the venue, there was no option but to give into the flow of the music and one of the wildest sets of the night.

Next up was Chelsea Grin, one of the most anticipated bands of the evening. One by one Nathan Pearson (touring drummer), Stephen Rutishauser (guitar), David Flint (bass), and Tom Barber (vocals) stepped onto the stage, and the crowd went absolutely ballistic. They opened with an old song, the title track from their 2011 album My Damnation. Every fan was screaming the lyrics with Barber. There was one fan in particular that shared the mic with Barber from the crowd and did an incredible job covering the vocals as they switched on and off. Towards the end of the set, they brought time back to 2008 and played their hit “Crewcabanger” off of their self-titled EP. This incredible set was nostalgic for old fans of the band and electrifying for new fans.

The time had finally come for the headliner Dying Fetus. Everyone in the venue pushed to the front of the stage eager for the band to start. The lights went dim as Trey Williams (drums), Sam Beasley (bass, vocals), and John Gallagher (guitar, vocals) stepped on stage opening with “Schematics”from their 2003 album Stop at Nothing. At this point, all hell broke loose. The pit opened up like a black hole. It was the size of the entire room and no one was safe. There was no where to move yet people were being pushed in every direction as red and yellow lights flashed to the music. There are no words to describe this set other than pure insane anarchy. The intensity of this entire evening will go unmatched, as this heavy metal lineup unquestionably destroyed at The Palladium Upstairs.