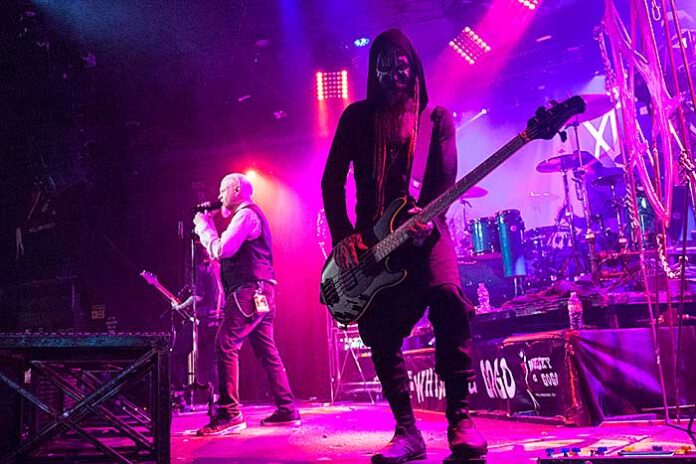 Arriving early in Hollywood, I walked over to Rainbow Bar and Grill, a staple for any and all music lovers that regularly frequent The Whisky. Every minute that passed, more and more fans that were clearly in Hollywood for Gemini Syndrome shuffled in and filled the restaurant with exuberant laughter and obvious excitement for the upcoming musical event. At one point, about half the people in there broke out singing to the Billy Idol song playing throughout the entire place—the perfect way to start the evening.

Up first was Band of Family, a quartet from Bakersfield, California—Paul (vocals), Canyon (guitar), Lucas (bass), and Te (drums). They played a six song set, including “4AM” “Fall In Line,” and “Habit.”

Next to take the stage was Pushing Veronica. Oli Ltner (vocals, guitar), Julien Silvas (vocals, guitar), Noah Rozansky (bass), and Brady Ward (drums) make up this “post-millennial, modern alt punk” band. Each member of Pushing Veronica dressed from different genres of punk, as well as took inspiration from the unofficial choreography of many punk performances, including running off stage and playing in the pit, to give the full experience of having to participate in the anarchy and chaos. Their set included “Chad,” “Bullshit,” “Punk Never Dies,” and “Song for Veronica.”

The third band of the night was Oh! The Horror. Jonathon Hellhouse (vocals), Jeremy Terror (rhythm guitar/screams), and Grady Finch (lead guitar/vocals) took the stage in their signature skeleton half masks and FX contacts. Oh! The Horror is a crazy blend of pop, punk, hip hop, metalcore, and horrorcore. One might think that this is too many conflicting genres that can’t possibly blend well together, but these geniuses have created a sound that leaves you in absolute shock and wondering how you lived life this long without knowing something so glorious was even possible. Their set included “Kill Em All,” “Bodybag,” the unreleased song “Apology,” “Tears of Gold,” and closing with “Halloween 365.”

Finally, the headlining act, Gemini Syndrome was up, and The Whisky was packed like I had never seen it before. Some people had been there since the doors opened hours before just to claim their spot at the front of the stage so that they can be as close as possible to Gemini Syndrome. The lights went down and their intro music started. One by one Gemini Syndrome took the stage and the audience was ready. Brian Steele Medina (drums) was unleashed first, throwing himself onto the metal cages at the front of the stage to get within an inch away from the faces of their dedicated fans like a wild beast.

Nicholas Paul Arnold (guitar), Miguel “Meegs’’ Rascon (guitar), Alessandro Paveri (bass), and Aaron Nordstrom (vocalist) took the stage as Medina continued to climb on everything he could, including his drums, as the audience’s demand for the show to begin grew more intense. They opened with songs from their new album, 3rd Degree-The Raising, including “Reintegration,” “Absolution,” “IDK,” and “Baptized in Fire.” They mixed in songs from their previous albums, “Remember We Die,” “Anonymous,” and “Eternity” from Momento Mori, and “Basement,” “Pleasure and Pain,” and closing the show with “Stardust” from Lux.