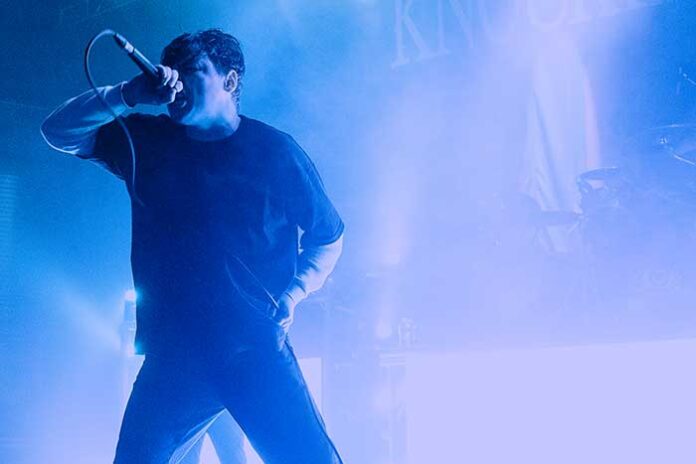 The weather was certainly a different shade of blue on May 7th, as fans eagerly awaited entrance into College Street Music Hall in the cold and rain. This metalcore/hardcore line up included Koyo, Kublai Khan, Movements, and headliner Knocked Loose, who were celebrating the release of their new EP A Tear in the Fabric of Life.

Long Island’s own Koyo was given the tough task of opening the show and setting the tone for the evening. Between their rough hardcore and melodic pop punk sound, Koyo did not disappoint. Vocalist Joey Chiaramonte brought energy to the crowd by running and jumping all over the stage and singing not only to the fans but with them. The most impressive stage performance was by bassist Layth Ibrahim. He jumped, ran, and spun, perfectly matching the beat of the music throughout the entire set. Anyone could see that performing was Ibrahim’s passion, which motivated the crowd for the rest of the evening.

The stage swiftly changed over from Koyo’s lighter sound to famously heavy American metalcore band Kublai Khan. Fans were so excited that a mosh pit broke out before the band even took the stage. Once the first note hit, the room really got moving. The fast paced music and crashing drums had the crowd going wild. Kublai Khan recently released their EP Lowest Form of Animal and played songs such as “Resentment”and “Dynasty.” The crowd was at their most enthusiastic when Khan closed with “The Hammer” off 2017 album Nomad. The entire room was off its feet screaming the lyrics with vocalist Matt Honeycutt. The intense drops and guitar riffs injected a powerful energy into the crowd. Though it was clear no one wanted Kublai Khan’s set to end, there was an excitement in the air for the acts to come.

The stage went dark and one by one the members of Movements took the stage. This post-hardcore band from California gave the crowd a break from the heavier sounds of the night. This group had more of an intimate performance, as their music takes a softer approach to subjects such as relationships and mental health. This did not stop the crowd’s high energy, however, as fan by fan came crowd surfing to the front of the stage singing their hearts out with vocalist Patrick Miranda. It was clear that there was an emotional connection between Movements and their fans, and that the show was a release for many in attendance. They played songs such as “Colorblind”from their 2017 album Feel Something and “No Good Left to Give” from their 2020 released album No Good Left to Give.

It was finally time for the main act of the evening. The crowd and security grew in anticipation for Knocked Loose’s performance. While waiting for the changeover, security started the wave with the entire crowd, putting a smile on everyone’s face. It is incredible to see the power music has to put everyone in a good mood and make friends out of strangers.

The entire room went black, and with a flash, Knocked Loose took the stage with the song “Where Light Divides the Holler,” the first song on A Tear in the Fabric of Life. Without hesitation fans were off their feet, starting mosh pits all over the venue, and even throwing crowd surfers over railings and to the stage.

Each member of the band had their own phenomenal energy that blended perfectly with one another. Drummer Kevin ‘Pacsun’ Kaine was on a platform well above the stage, a powerful position allowing his drums to command the crowd. Rhythm guitarist Nicko Calderon was the king of headbanging during their performance. He and his guitar moved together as one smoothly, efficiently, and with truly incredible energy. Bassist Kevin Otten kept an intense yet serious demeanor throughout his performance that balanced out the high movement from Calderon. Guitarist and vocalist Isaac Hale had a phenomenal presence on the stage. Between wild riffs and extreme singing and screaming, Hale left every ounce of himself in that performance. Vocalist Brian Garris is a tremendous lead. He runs all over the stage, and shows off his impressive flexibility with high kicks and soaring jumps all while interacting with the crowd.

Fans were mesmerized by the bright lighting and screens behind the Knocked Loose showing lyrics and clips from the band’s animated film for their EP A Tear in the Fabric of Life. Their set was a mix of songs from their newest EP, which was played in its entirety, as well as their albums A Different Shade of Blue, such as “Denied,” “Belleville,” “Mistakes Like Fractures”, and Laugh Tracks songs “Billy No Mates,” “Oblivions Peak,” and “Deadringer.”

Garris told the crowd how much the band loves playing the Northeast and how they watch the crowd grow each time they return. Typically, the band plays at the Webster Theatre in Hartford, so to move to College Street Music Hall and play to a crowd that packed the multi-level venue was a major accomplishment. The band closed out the evening with “Permanent,”the last song on A Tear in the Fabric of Life, a fitting end to an absolutely jaw-dropping performance.