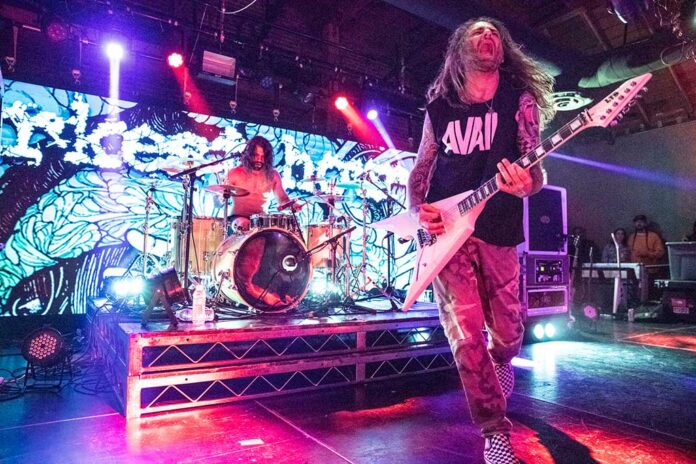 The night started out with God Collider, a local supergroup made up of former members of Hope Conspiracy, Suicide File, The Explosion, and Darkest Hour. Even though the night had only just begun, the incoming crowd quickly made their way to the stage to envelope themselves in epic metal.

Next up was Thrown Into Exile, a group from Los Angeles that always finds themselves performing in the best lineups. Or, maybe the lineups are the best because they are in it? The crowd had started filling up the venue by this time, and by the level of the enthusiasm that only metal fans can show, it was clear that most of the people were familiar with and huge fans of Thrown Into Exile. The mosh pit had started going strong and the long hair was flying everywhere.

Then it was Toxic Holocaust. This group embraced the type of aggression that one does not usually find at a metal show. Shortly after their set began, a drunk fan decided that it would be a good idea to stage dive. When security didn’t do anything about this, another guy decided to give it a try. And then another. Each one failed miserably, either getting their foot stuck in the metal barrier in front of the stage, causing them to fall right on top of someone in the front row, or resulting in kicking someone in the head. The crowd was not too thrilled about this, either, as most moved out of the way instead of trying to catch them. Until, that is, the lead singer decided that it would be a good idea to tell the crowd over the mic that he wanted everyone to stage dive, resulting in a surge of drunken jerks rushing to the front of the stage all at once, crushing and suffocating those in the front row. That didn’t stop people from forcing their way onto the stage in order to stage dive, pushing people down, or into the metal barrier that stood between them and the stage, and then landing on top of people. This behavior was not exclusive to the front of the stage. This aggression found its way into the mosh pit, creating a fairly hostile space. 1720 is an all ages venue, and it was sad to see the lack of concern for the safety of the people in attendance by the singer of this group.

Thankfully, the crowd calmed down when Darkest Hour took the stage, and the enthusiastic shenanigans returned to the level people tend to expect and enjoy at shows like this. John Henry (vocals), Nico Santora (lead guitar), Aaron Deal (bass), Mike Schleibaum (rhythm guitar), and Travis Orbin (drums) have hit the road to celebrate the 15 year anniversary of Darkest Hour’s album Deliver Us. The headbanging resumed, and the only reason people would even try to get near the front of the stage was to fist bump the band members. Each member, save for Orbin, made it a point to stand at the front of the stage as often as possible, allowing them to be as close as they could to the audience. They constantly moved across the stage, each member giving attention to everyone as much as is possible. They engaged fans and proved they were excited to be there. Darkest Hour decided that for this tour, they would gift fans a rare opportunity to experience Deliver Us in its entirety.

The venue was packed with barely any room to move through the crowd. Every single person was visibly happy to be there or relieved to be surrounded by incredible music, drinks, and vests covered in patches. This set was clearly a respite from something for everyone. As if they hadn’t already given us a remarkable show, Darkest Hour finished their set with a three song encore. The first encore to bring this night to an unwanted end was “With a Thousand Words to Say But One,” from their 2005 album, Undoing Ruin. Then, “The Sadist Nation,” from their 2003 album, Hidden Hands of a Sadist Nation. Finally, to close out an incredible night of amazing metal came “Tranquil,” from Undoing Ruin.