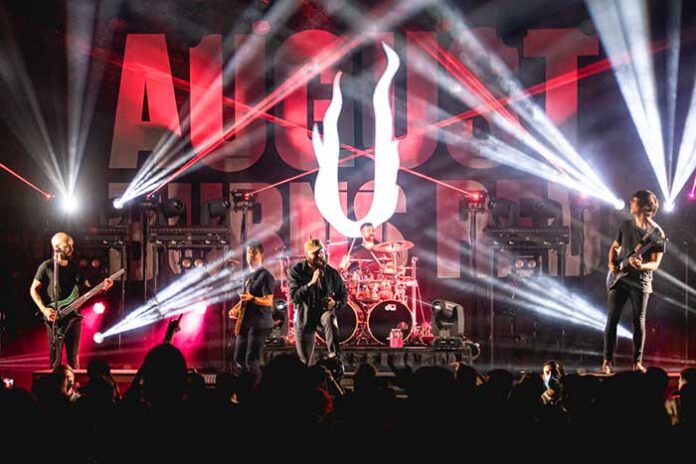 AUGUST BURNS RED
LEVELER 10 YEAR ANNIVERSARY TOUR
with Like Moths to Flames, Erra, and Fit for a King

Pennsylvania metalcore heavyweights August Burns Red are currently celebrating the 10 year anniversary of one of their greatest records, Leveler, with a massive run across the USA with a stacked lineup featuring Fit for a King, Erra, and Like Moths to Flames. Album anniversaries are good reasons to get bands to play deep cuts from albums, and August Burns Red raised the ante even further earlier this year when they released a special modernized and rerecorded version of the album in a different tuning. We caught up with the tour as it came to play the historic State Theatre in the coastal city of Portland, Maine on Saturday, September 18th.

Fans began lining up hours before the night’s show began, and though attendance could’ve been greater in the 1,500 capacity venue, those in attendance made up for that with their energy and voices. The night started off with a short but satisfying set from Ohio natives, Like Moths to Flames that got the crowd warmed up and ready for the bands to come. The audience for their part made it known that there was a significant contingent of Like Moths to Flames fans in attendance, especially during set closer “Bury Your Pain.”

On their first run since releasing their well received self-titled album, Erra went straight for the throat with a set full of hit singles off the album, along with older material from their previous albums Neon and Drift. The band started things off with a trio of new songs, including the crushingly heavy “Scorpion Hymn,” which features a ferocious breakdown and low guttural section from frontman JT Cavey that got the floor section of the State Theatre moshing and headbanging. Meanwhile, on “Eye of God” and “Vanish Canvas,” guitarist/vocalist Jesse Cash’s melodic vocals were flawless and complemented by many voices in the crowd singing along. Guitarist Sean Price is not on most of the tour for undisclosed reasons, but fans were treated to August Burns Red bassist Dustin Davidson shredding his way through much of the live set and clearly having an absolute blast doing so. Erra is always a tight band live and tonight was no different. They closed their set with the epic single “Snowblood,” and left many new fans eagerly awaiting a return visit to the city from the band.

After a short break, Fit for a King came out with a tall order to match the energy of the act before but seemed to have succeeded. Heavily muscled bassist/vocalist Ryan O’Leary was an absolute menace on the stage, whipping his instrument around in circles in between delivering vocals. As crazy as things were for Erra, it was obvious by the volume of singing and screaming along going on that much of those in attendance were at least half here for Fit for a King. These Texas natives, led by frontman Ryan Kirby, steamrolled through an 11 song set featuring fan favorites like “Breaking the Mirror,” “The Price of Agony,” and “When Everything Means Nothing” with deadly precision.

Finally, it was time for August Burns Red to close the night out. As is typical at any August Burns Red headliner, their set was preceded by the lights dimming for a massive crowd sing-along to System of a Down’s “Chop Suey.” Then, the Leveler portion of the set began—first with intro track “X” during which, one by one, the band emerged as their dazzling lighting kicked on. Lead guitarist JB Brubaker, clad in his classic flip-flops, along with bassist Davidson and fellow guitarist Brent Rambler loomed over the crowd from the tops of stage risers as drummer Matt Greiner laid down the opening fill on drums. As the intro faded, vocalist Jake Luhrs sauntered out and unleashed the opening lines to “Empire.”

Holy nostalgia, Batman! It was amazing to hear this record from front to back for the first time live. The entire night felt like a time capsule to 2011. It also served as a reminder of all the absolute bangers that are on Leveler, like “Pangaea,” “Cutting the Ties,” and “Carpe Diem.” Fans were treated to a massive drum solo from Greiner that seemed to go on forever (in a good way) at the end of the album play through, before a massive four song encore featuring three newer songs off their last new full-length Guardians, along with the tried and true hit “White Washed.” For die-hard or even casual August Burns Red fans, this is a tour that can’t be missed. When else are you going to hear such a stacked set list from them and see such a great lineup of bands to boot?! You can catch the Leveler 10 Year Anniversary Tour through the end of October, the remaining dates are below—note that due to a COVID-19 exposure of the tour party, the band had to cancel a stretch of dates from the end of September through October 8, with a return to the road with Aftershock Festival on October 9.