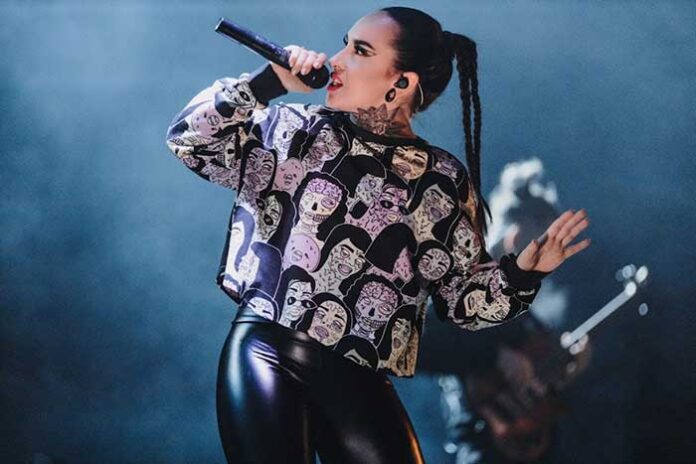 After dropping one of the most anticipated metal albums of the year, Wallflowers —which commanded the charts worldwide by achieving #1 and top 10 rankings in the US, UK, Canada, Germany and beyond—JINJER wasted no time hitting the road in Europe, once again proving that if there is a chance to tour, even in these strange times, JINJER will risk almost anything to give their fans a show to remember. Now, the band has successfully completed this leg of their journey and are set to lay waste to North American venues in just two short weeks! The band also plans to record a new music video in the interim.

The band stated to fans on social media:
“EU TOUR IS OVER! Wow, what a tour this was! For JINJER, as well as our brothers in Hypno5e and Space Of Variations, this run was important on so many different levels. For one, we were one of the first tours to cross borders since the pandemic started – and many shows we were the first full capacity shows for promoters and clubs since then as well, or the first metal shows, or the first shows you got to watch standing up with very little restrictions – and not to mention our very first tour since March 2020! This tour was hard for all involved, but it was 200% worth it. For all other bands wondering if they should move their tours to 2022… please do not – the clubs, the promoters, the local crews, the caterers, the local bands and especially the fans NEED you to play this year and make things normal again! If we can do it then you probably can as well… Thanks to each and every single one of you that came out to these shows – we made a small piece of history together!!! PS: COMING TO AMERICA TOUR 2021 IS UP NEXT!!”

In addition to their several already sold out North American tour dates (including Nashville, TN, which has just reached capacity), JINJER is thrilled to reveal that they’ve not only added two new dates in Rochester, NY and Harrisburg, PA, but have expanded rooms at select stops. The Milwaukee, WI show at The Rave has been upgraded to the main room, while the show in Tempe, AZ will move to the Marquee Theater (previously purchased tickets are valid).

Due to current Covid capacity restrictions in Canada, the previously scheduled shows in Toronto, ON and Montreal, QC – which weren’t able to be relocated – will be postponed to 2022.

See below for all currently confirmed JINJER tour dates.

KOBRA AND THE LOTUS Release New Music Video for “Burn!”