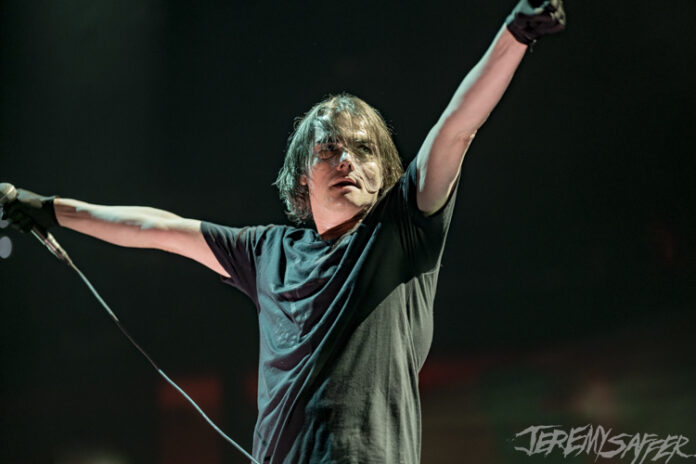 It has been over 10 years since My Chemical Romance performed in Connecticut, last hitting the state in 2011 with Blink-182. Fans have been waiting for this night to come after a break up, a reunion, and the tour being postponed. Tonight was the night for My Chemical Romance fans new and old to finally celebrate the return of the most important band of this subcultures generation. The Mohegan Sun Arena is inside a casino, and as soon as you stepped foot inside the venue, there were wall-to-wall My Chemical Romance fans celebrating their return—black on black clothing, platform boots or docs, heavy eyeliner, many wearing the classic school boy ties, and some even cosplaying as the band. It’s been a long time since this massive of a gathering and unity existed, and there were younger fans, who discovered My Chemical Romance during their absence, and fans who have been there since the beginning. Everyone was lining up, coming together, embracing, sharing stories, and had an exuberant anticipation for everything that was about to take place on stage in front of them, many for the first time in over a decade and many for the first time ever.

With the red curtain up and a strange ambient noise filling the room for a few minutes, the house lights dropped as the crowd let out a deafening prolonged scream of excitement as My Chemical Romance took the stage. Gone are the days of the theatrical looks, heavy makeup, and costuming, as the band took the stage in clothes made more for comfort. Gerard Way, however, did wear a plastic face guard for the majority of the show. As the band took their places on stage, the ambient noise turns into the intro of their only newly released song since reuniting, “The Foundations of Decay.” It was immediately apparent that My Chemical Romance was having fun on stage, with massive smiles and playing the songs they want to play (the set list changes nightly, so it’s always a bit of a surprise). The set list was mostly fueled by five or six songs each from Three Cheers for Sweet Revenge, The Black Parade, and Danger Days, curiously only playing one song from their debut I Brought You My Bullets, You Brought Me Your Love. Between songs, the ambient noise would run as Gerard would take to the mic to make noises or recite things as an intro to songs or singing a rendition of “You Are My Sunshine” before going into “Famous Last Words.”

The band blazed through the set list with an enamored crowd singing and dancing along to the show. When the crowd favorite songs hit, it set off the massive audience into a giant choir singing the lyrics as loud as they could. Songs like “Helena,” “I’m Not Okay,” “Teenagers,” and “Mama,” led to massive crowd singing, while most notably during “The Black Parade”—this generation’s “Bohemian Rhapsody”—the entire crowd to sung the complete intro with Gerard. While many were singing and dancing, looking around in the audience, there were a lot of tears being wiped away. This was an emotional night for many people. Unlike most bands, the depth of the impact My Chemical Romance has had on their fans is immeasurable, and anyone could see that by looking around them as the band was performing.

My Chemical Romance encored with two songs, closing it out with “Vampires Will Never Hurt You” from Bullets before bowing out and leaving the stage. It was great to see such a meaningful night take place for everyone in attendance, as well as watching the band having a great time on stage together. While the set list had its peaks and valleys, it was incredible to see so many enthralled faces loving every second of it. Here is hoping they will be back sooner rather than later.