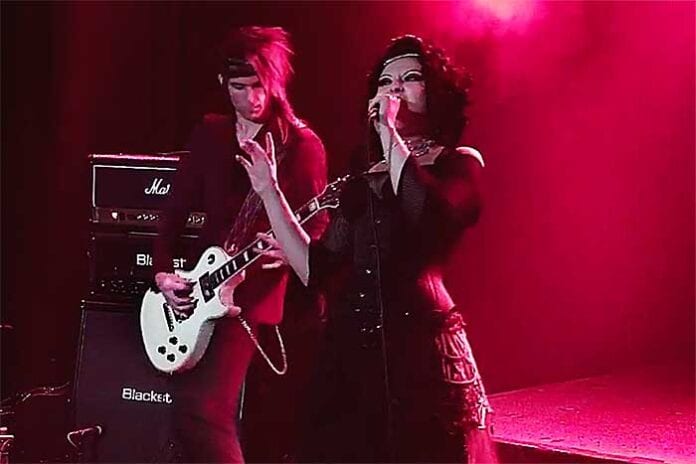 FIRA is “made of music and fire!” proclaims the rock duo Hannah Fira and Michael “Vette” Rodd when describing the band itself. Los Angeles based act FIRA found themselves in the sights of thousands during an unexpected livestream performance at the world famous Whisky a Go Go, performing their latest release From Vegas With Blood in its entirety. What began as a request to test the new livestreaming equipment at the venue turned into a rock show for the masses as the band was asked to perform to the Whisky’s large online audience on their way to the venue.

A “full-circle” experience if you will, as FIRA’s frontwoman Hannah once worked as a lighting tech at the Whisky a Go Go, during which time she had met FIRA guitarist Michael “Vette” Rodd. Long since those days, FIRA has evolved into “a popular vampire-inspired musical duo who’ve created an original blend of metal and dance music around a fantasy storyline.” With From Vegas With Blood produced by Anthony Montemarano (Mursic, Neon Coven) and mastered by Alex Crescioni (credits including, but not limited to, DIM7, Dopesick, Zeistencroix) at Stygian Sound, the band’s sound was fully recognized in this major release.

The first single off of the record, “Endless Night,” held its debut at the Endless Night Vampire Ball last February at the Globe Theater in Los Angeles a year ago, the band’s last live audience performance prior to the pandemic lockdowns. Despite the music industry halting its productions since, the band’s following singles off of the record still found themselves embedded deep in the minds of fans, alongside signed physical copies that can be ordered off of the official website. As such, this impromptu performance is the first time the duo have performed the new album on a stage in its totality.

FIRA is a thematic band, with the album containing a plot that follows the characters “Fira” and “Vette” as they set off on an adventure to save their realm. Due to the nature of a spontaneous performance, the two didn’t have the opportunity to include their additional lighting and props during the livestream concert, but that certainly didn’t stop any of the songs from catching the interest of over ten thousand viewers, sparking an excitable comment thread on the venue’s official Facebook account.

The show opened with “Subdued,” a rock anthem that throws you right in the midst of the action. Similar to a film throwing you into a plot and refusing to let go, “Subdued” transports audiences to a fierce battle upon a pirate ship, with no immediate context necessary. For a great beginning song in the performance, a catchy and powerful rock ballad is a splendid way to enthuse a viewer base that had not heard of the band before. Bringing forth powerful and skilled vocals, Hannah immediately captivated the room. With the band being a duo, Michael’s guitar sings as much as Hannah’s vocals do, and this set was an excellent demonstration of the symbiotic nature of the two “voices,” especially noticeable in the moments where vocals are not present.

“Subdued” was quickly followed by “With Blood,” the next chapter of the tale that finds the band members pleading to a goddess atop of a volcano. The vocal style changed from the previous song, leading to a very diverse set that became more and more apparent as the livestream progressed. Despite lacking a physical audience, Hannah and Michael performed as if a crowd still existed below the stage, expressing their individual musicianship in great skill. The camera panned to Hannah as she bellowed out exceptional vocals and storytelling lyrics and to Michael’s fingers as he shredded skilled solos and strong melodies, which made you almost feel like you were actually there—the closest we can currently get!

“Final Frontier” and “Vegas in Space” followed suit, a significant deviation in sound from the previous two songs. Dancier, even catchier, and a beat that will surely burrow deep in the mind, both songs encouraged listeners to really begin moving to the beat. The electronic elements of the band’s sound really shone here, expressing their ability to transform each song into its own individual sound, akin to a chapter in a book. Even the performance style began to match each song itself, creating an entirely new scene from the previous melody. These songs got a whole new audience typing their thoughts in the comment section, showing that the range in style was able to draw in different types of music fans, swiftly transcending genres.

“Overcome” and “Threshold of Fear” pulled more of the darker sound fans, as these songs were building up to something even more cinematic. It’s worthy of noting that the Whisky’s lighting was quite prime for this event. The scheme really matched the pace and sound of the music and added an additional atmosphere to the experience. The buildup was worthy of its time, as “Showdown” really smacked the virtual crowd with a very powerful sound. A big battle song, “Showdown” musically led the listener through a battle scene between Hannah, Michael, and the primary antagonist of the story named Fear. You could really hear the rise and fall of the various conundrums the characters faced, perfectly matched by Hannah’s expressive singing and Michael’s articulate and dynamic guitar.

Next up was a familiar tune for some, “Endless Night,” that gained the band notoriety previously. Although this unplanned performance didn’t allot the band the opportunity to perform this song the way that it was shown at the Globe Theater, they came close with exhibiting the same sultry mood that enchanted the event goers a year prior. The mood set by “Endless Night” beautifully transitioned into the final song of the set, “Labyrinth.” “Labyrinth” is arguably the most veering song on From Vegas With Blood, entirely different from the previous eight songs. Opening with a very 007 James Bond sounding piano melody, “Labyrinth” features deep and moody vocals, with an almost sensual sound to them. Not the same sensuality as “Endless Night,” but still an enamoring singing display sure to pull in the gothic music listeners. Michael’s guitar solo for “Labyrinth” was equally as mesmerizing, perfectly in combination with the melody set forth by the piano, featuring the same beautiful sway.

For a performance that had no preplanning or buildup prior, this stream was a grand success for FIRA, really showcasing the duo’s true passion for their craft, both in performance and in musical ability. Adaptability is equally key as shows can be unpredictable, and the two pulled this one off in such a way that truly deserves a cheer.

DISEASE OF THE ANIMA TOUR