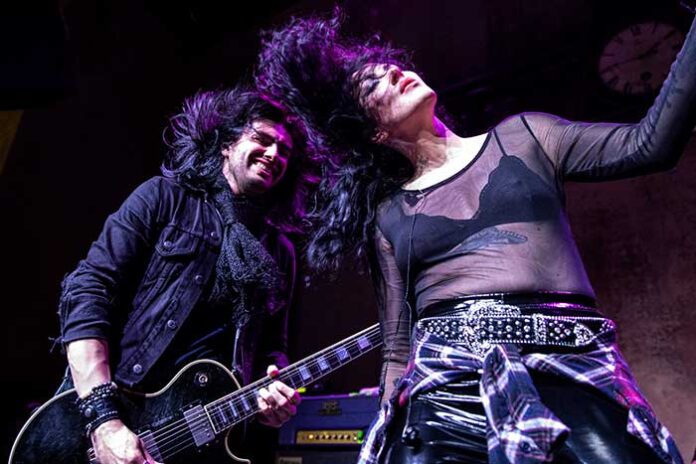 DOROTHY with Joyous Wolf and Classless Act
Gifts from the Holy Ghost Tour
Anaheim, CA
The Parish at House of Blues
05.19.22

The line outside the House of Blues was wrapping around the corner of the upper level of the Garden Walk. Fans were visibly excited to see Dorothy—a band from Los Angeles usually considered a post-grunge, bluesy rock band—play the last headlining show of its Gifts from the Holy Ghost Tour before heading off to Napa Valley for Bottlerock. My knees were giving out a little from my own excitement, and The Parish, a secondary venue within House of Blues, was packed. It felt like there wasn’t a single person in all of Southern California who was willing to miss this show.

The first opening band was Classless Act, a young but already seasoned band from Los Angeles with Derek Day (vocals), Franco Gravante (bass), Dane Pieper (guitar), Griffin Tucker (guitar), and Chuck McKissick (drums). Everything from their costumes, hair, stage presence, and their music are very much influenced by the great rock bands of the 70s and 80s. They pay an honorable tribute, filling the stage completely with glorious 80s metal hair. Their set included “This Is for You,” “Give It to Me, Cry,” “I’m the Storm,” and their self-titled song, “Classless Act.”

Next was Orange County’s very own Joyous Wolf, with Nick Reese (vocals), Blake Allard (guitar), Greg Braccio (bass), and Robert Sodaro (drums). They filled the room with soon to be iconic music that everyone already knew all the lyrics to. Their set included “Quiet Heart,” “Get Myself Right,” “Storm,” “Fearless,” and “Mother Rebel.”

After a quick set change, Dorothy took to the stage—Dorothy Martin (vocals), Devon Pangle (guitar), Eli Wulfmeier (guitar), Eliot Lorango (bass), and Jason Ganberg (drums). There was a short instrumental introduction by the band to build anticipation before Martin took the stage. The second she appeared, the crowd lost their minds—their screams could probably be heard miles away. They wasted no time and jumped right into their set, opening with “Down to the Bottom.” Surprisingly, they played very few songs from their latest album, Gifts from the Holy Ghost, but it was thrilling to hear them perform songs I have been singing in my car for the last few years. The arrangement of the next two songs, “Made to Die” and “Ain’t Our Time to Die,” were amusing, and we wonder if the person with the sense of humor to do this was also the same person who put googly eyes on their equipment. What came next was “What’s Coming to Me,” which was followed by a hauntingly beautiful version of the Eurythmics’ “Sweet Dreams (Are Made of This)” and then “Rest in Peace.”

The band played an instrumental intermission while Martin ran off stage for a few minutes. When she returned, they gifted us with one of my new personal favorites, “Beautiful Life.” The audience couldn’t have possibly been any more energetic and happy, until the intro to “Medicine Man” began, then everyone went crazy, and I couldn’t contain my own enthusiasm when they played their next song, another of my all-time favorites, “Raise Hell.”

The entire band then left the stage, except for Ganberg, who gave us a thrilling and remarkable drum solo. Even though there was nothing to sing along to, the audience was just as excited for this drum solo as they have been for any of their singles. Once Ganberg was done, the band reemerged and took the stage for their final two songs, “Flawless” and “Freedom.” This show was a beautiful mix of old and new, and gave all in attendance an unforgettable night of their greatest hits and a taste of the greatness to come.